THE AUSTRALIAN RV industry, at least at the assembly stage, is a largely home grown one. Of course, there are some rigs (mostly fifth wheelers) that come from the US and a few have made their way from Europe and South Africa. But it seems that a Chinese influence, which has been somewhat erratic up until now, has yet to come on a large scale.
I mention all of this because I was recently able to get a detailed look at a caravan which was designed in Australia, but fully built in China. The manufacturer in question, Exclusive Caravans, may be new to many, but the company's very experienced general manager Peter Russell shouldn't be.
Setting up a factory in China in order to build a caravan to Australian standards is no short-term project. When I asked Peter about it, he told me he had spent several months living in China to bring his project to fruition. And when the inevitable question of meeting Australian standards on items like gas and electrics came up, he produced a folder showing the necessary certification carefully signed off and filed away.
With the company currently in the process of setting up arrangements with Australian dealers, Exclusive vans are directly available via contact with Peter Russell himself.

LOCAL STYLE
Designed with a travelling couple in mind, the Walk-A-Bout 640ST is quite a conventional van in many respects. With a length of 6.4m (21ft) and ATM of 3500kg, it has quite a respectable load capacity of 900kg, which should easily cover any extra weights. Depending on how you travel, the 640ST is in the mid-to-large 4WD tow vehicle range.
Underpinning everything is a 450 gauge hot-dipped galvanised chassis built on 100x50mm rails. The two drawbar rails on each side run right back to the rear of the van. Leaf spring suspension with greaseable shackles and shock absorbers are fitted to the tandem axles.
A look under the van also reveals a spare wheel and two centrally-mounted 85L polyethylene water tanks. Interestingly, a one-piece 1.2mm aluminium under-floor sheeting is attached to the chassis by Sikaflex sealing compound. Above the aluminium, the floor consists of 20mm polyurethane foam insulation and 9mm ply.
With two 9kg gas cylinders in the front boot, the drawbar and its conventional coupling and centre-mounted jockey wheel look a little lonely. The front boot is split between the gas cylinder compartment and the general storage space, which is lined with marine carpet and features mounting points for the necessary winding handles. Additional external storage is provided by a tunnel compartment behind the front boot.
Although a meranti timber frame is used in the side walls, the rest of the van is more of a sandwich structure, with the frame sealed in fibreglass and polyurethane insulation. There is no shortage of lights along with the rear bumper, and a moulded air scoop along the top edge finishes off a very tidy look.
A security screen door and acrylic double glazed hopper windows are standard.

TRIED AND TESTED
With the first of his new China-built range, Peter Russell has played it safe with his layout choice: front bedroom and rear full-width bathroom, with kitchen and dinette in between. Curved locker doors and a light timber hue give the fairly standard "Euro look", while timber pelmets and curtains add a certain touch of class. Large windows and two big roof hatches offer a generous supply of natural light and ventilation and add to the van's very open feel.
Low profile ceiling-mounted LED lights offer good illumination during the evening hours, as do LED reading lights at the dinette and bed.
Surrounding the queen bed is a full set of side wardrobes with mirrored doors, overhead lockers, bedside cabinets and a rear bed shelf. Additional storage is provided under the bed and by foot-of-bed corner cupboards. The flatscreen TV is mounted on the wall at the end of the kitchen cupboards and can be seen from either the bed or the dinette.
For the travelling cook, the design of the kitchen bench shows a certain amount of caravan experience. The bench itself features a Thetford three-burner cooktop with grill/oven, stainless steel sink and drainer, 195L Indel fridge/freezer and a Midea microwave.
Bench space is a feature of the kitchen, as are variably sized drawers, shelves in the overhead lockers and a decent-sized slide-out pantry designed to keep groceries in place when the going gets rough. An AM/FM radio/DVD player is fitted above the TV. 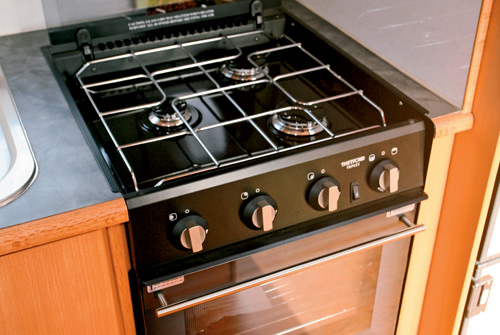 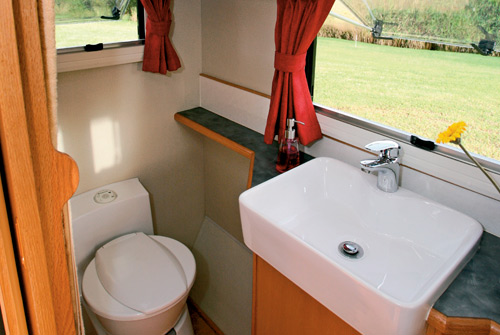 LOUNGE LIZARD
Designed for relaxing as well as for meals, the leather-upholstered dinette has seats with contoured backs and wall cushions, with a tri-fold table in between. The only items missing when sitting sideways are hinged footrests, but they may have hindered the under-seat storage (drawer under one seat, house batteries under the other). A double powerpoint can be found under the seat, with lockers above.
For those who like their bathrooms light and airy, this one has three windows: one in the rear wall, one on the offside above the Dometic cassette toilet and a third in the nearside shower cubicle. These help ventilation no end and offset the cramped feeling that some bathrooms have.
One somewhat unusual feature of the shower is its very neat-looking bi-fold door, which actually works very well.
Bathroom storage is quite generous, with four large overhead lockers, as well as cupboards under the wash basin. The rear window means there is no wall mirror, and I wonder whether one of the overhead lockers could be fitted with an angled option.
For camping away from mains power, the 640ST comes with a 120Ah battery that can be charged from a 135W solar panel or a Waeco 25A automatic charger. The roof is designed to accept more solar panels if needed - something to consider if extended stays are planned, especially given the 12V fridge.

THE BOTTOM LINE
Unfortunately, I didn't have time to really put the Walk-A-Bout 640ST through its paces on some rougher terrains. But from what I could tell during the limited driving time I had, a considerable amount of local design experience has gone into its careful construction.
There are a few rough edges that might be expected with a prototype van, but fewer than I've seen elsewhere. The 640ST has all of the necessary practicalities built in, plus several of the comforts modern caravanners have come to expect.
Source: Caravan World Sep 2011.