I’ve always loved surf beaches. The mesmerising waves, the sunrise and sunsets, the fine white sand beneath your feet and, of course, the fishing. It’s really easy to be lured into the world of boats and technology, but it’s refreshing to get back to basics on a surf beach. It’s bread and butter fishing that can be exciting or calm and beautiful. One thing’s for sure, the surf cleanses the fisherman’s soul.

Like most sides of the sport, surf fishing can be as easy or as hard as you like it. I’ll rarely get up early to hit the beaches, although perhaps I should. On a beautiful day, it really doesn’t matter when I go or what I catch, but if I want a real chance of success, timing a tide and hopefully a sunset can lead to some dynamite action. 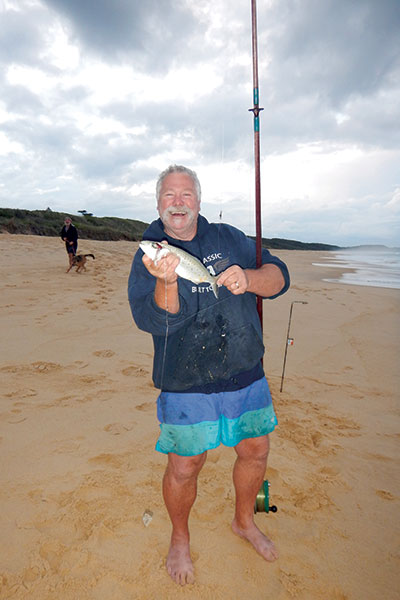 There is barely a surf beach in Australia that isn’t worth some investigation on the last couple of hours of a rising tide. Schools of fish come in to feed on all of the delicacies being washed out of the sand like nippers, worms, crabs, fleas and even shellfish like pippies. Little baitfish are often seen in the shallows with larger species like Australian salmon, tailor, bream, flathead, trevally and mulloway in hot pursuit. It’s the old ‘you’re never the biggest fish in the ocean’ syndrome, and the larger predators such as dolphins and sharks are often not far behind.

Surf fishing can be a nocturnal affair with some prized target species patrolling the inshore arena under the cover of darkness. Mulloway are a favourite as are gummy sharks, but don’t be surprised to find a few more recognised reef dwellers such as snapper in the mix. It’s a great night out for the kids and adults alike, especially if you can light a fire to keep warm around base camp.

There is a wide variation of tackle, bait and styles to suit the wide variance of target species throughout our long coastline. However, surf fishing often involves casting large sinkers long distances out into the swell so it’s generally quite big tackle. Rods can be anything from 8-13ft with reels capable of holding a fair quantity of 6-kg (15-20lb) line. Monofilament is still more popular than braid, as a badly cast braided line may well cut a finger off quickly with the speed and power of the cast.

Most anglers down south use threadline (spinning) or overhead reels in the 5000-7000 sizes, and yet you will be stretched to find anything else besides Alvey side cast reels north of Sydney. The use of overheads and side casts is an art unto itself, particularly the overheads and some of these specialists may well prefer braid. While side casts can be awkward for novices, they are certainly worth learning. These 1:1 spindle or centre pin style reels are a little hampered by slow retrieval rates, yet their absolute simplicity and construction strength ensures many years of trouble free service in this extremely high wear environment. It’s not uncommon to find large groups of tailor fishermen all gathered together up to their waists in the surf when the schools gather to feed near the shoreline gutters. Everything gets soaking wet and sandy, and reels often cop a full saltwater dunking. Only side cast reels stand up to this sort of abuse.

Surf rigs also vary according to the species. Up north, running sinker rigs with a series of ganged hooks on wire traces with a whole pilchard for bait is most common, due to the prevalence of toothy tailor.  Bream and whiting anglers replace the wire with fluorocarbon traces and reduce the hook size to perhaps size 4 to size 1/0 with varied baits including strips of pilchard, squid, nippers, worms, pippies and mussels. Chook and mullet gut is also popular, as are strips of fresh chicken flesh.

Lures can be very successful in the surf, provided you can throw them quite long distances. Silver slugs, flashy Lazer styles, large soft plastics, and poppers can produce dynamite action when cast and retrieved. If you’re bait fishing, try tying a small popper or soft plastic on to one of the droppers on a paternoster. It dramatically increases your chances of success particularly when the crabs are a problem, stripping your bait often without you feeling it.

Surf fishing is no different to any other form of fishing. If you can find some structure you will usually find the fish. Structure on a surf beach is usually a gutter between sand banks where the water from the wave action is channeled back to sea. These gutters may also be washouts around the edge of a rocky outcrop or reef formation as well. Larger fish such as mulloway, gummies and even flathead often lay deep in the channel lurking for passing morsels, whilst other smaller species may skirt the edges feeding in the turbulent oxygenated water that holds plenty of food. Feeding a gutter with some berley increases your chances exponentially, and you will be surprised how a couple of handfuls of cut pilchards thrown into the wash can turn on the action. However, too many handfuls will bring in the pests.

Surf fishing is a terrific pastime but it can also be quite energetic. Even a small fish can bite hard and battle it out using the surge of the wave action to their advantage. A trip to the beach is always a terrific outing for travelling campers, and the equipment really takes up little space especially with the quality of modern multi piece rods. The same equipment can double up for break walls and rock fishing so it’s a vital part of your travelling quiver. Get into it, and remember old surfers never die they just become fishermen (why have I got old Beach Boys songs in my brain?).

The full feature appears in Caravan World #565. Subscribe today for the latest caravan reviews and news every month!