Tell me…. do you love ‘em or hate ‘em? Does your holiday album feature you with a cheesy grin in front of one big landmark after the other around the country?

A giant carpet snake guards the southern entrance to Ayr in North Queensland. 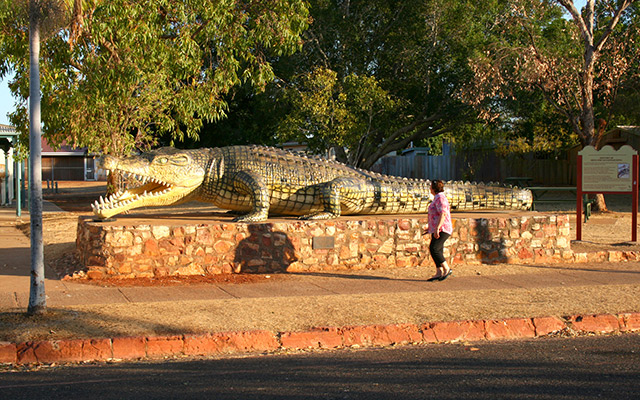 I’m talking about “big things”. Those oversized structures depicting gargantuan fruit, wildlife or infamous characters from our past that are meant to be a tourist trap to get us to spend a few days or dollars in the towns whose entrances they guard.

Of course, they usually have some link to the region in which they stand.  For example Tully (famous for its rainfall) has a giant gumboot, Normanton in the northern Gulf country has a big crocodile (said to be a replica of one shot in 1957 in the nearby Norman River), Bundaberg has a giant rum bottle outside the city’s distillery and in Adaminaby in the Snowy Mountains region (probably our best trout fishery in the country) there is, of course, a big trout.  In my home town of Ayr a giant carpet snake guards the southern entrance to town and is a part of the local indigenous culture.

Tully is renowned for its rainfall so a giant gumboot seems very appropriate.

The list goes on and on, with all states and territories boasting at least one “big thing”.  In fact, according to Wikipedia there are more than 150 big structures around the country, with the first being the Big Scotsman in Medindie S.A. which was built in 1963.

To answer the question posed at the beginning of this post, I’d have to say I’m a bit ambivalent about them. I certainly wouldn’t go out of my way to see one.  They just seem to be a part of the touring scenery and they’re certainly great if you’re travelling with children.  The giant whatever-it-is is also often attached to a tourist information office, making them hard to avoid if you need to know something about the region.

Having implied that I’m not a fan, as a writer I also have to admit that I’ve probably used images of “big things” to illustrate a few magazine articles over the years, hence I’m probably guilty of promoting the “big thing” fixation that some travellers have.

Normanton’s big crocodile is said to be a replica of one shot in the nearby Norman River in 1957.

However, to me, big things seem a rather shallow way to promote an area and, I suspect, lose their effectiveness as they become a well-known landmark. Any district that has one had better have plenty of real attractions to back it up if they want to attract a steady stream of tourists.

Mind you, the publicity-grabbing ability of big things can be boosted with the sort of stunt pulled in the North Queensland town of Bowen recently.

The town’s Big Mango simply disappeared overnight and the local, national and UK media leapt on the story. Someone even created a Facebook page to help find the Big Mango. The whole thing seemed more than a little suspicious and eventually it was revealed that the “theft” was simply a publicity stunt.  I’m not sure who was behind the hoax, but it certainly provided the tiny tourist town with some great free publicity.

Anyway, do you love ‘em or loathe ‘em? Do you seek them out or avoid them at all cost? And comment below to tell us about you’re the best “big thing” that you’ve spotted on your Australian travels.