DRIVING A CARAVAN IN ADVERSE CONDITIONS

Tony and Denyse Allsop encountered a very wet drive from Goondiwindi to St George, Queensland, and, despite changing their driving style, did not arrive unscathed. Neither did the next three caravans who pulled in next to them.

Denyse and I arrived at the Pelican Rest Tourist Park in St. George after travelling from Goondiwindi. 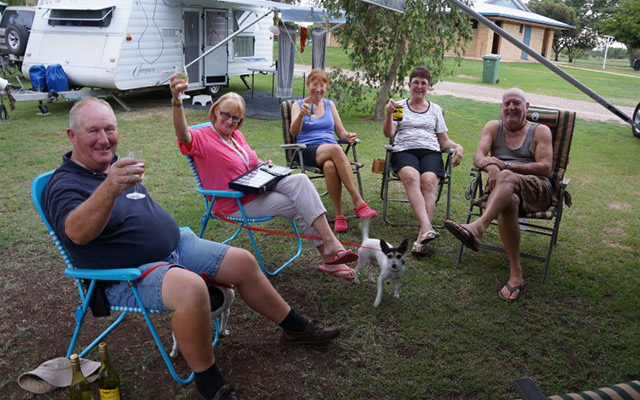 It had been very wet, and the reputedly sealed LED indicator lights on the bull bar of our new car had filled with water.

Later that afternoon a couple limped in beside with a four month old van. It had two broken leaf springs. Half an hour later a van pulled in on the other side of us with one broken spring. Geez, bad luck really does travel in threes!

The next day an off-road van pulled in with two spare wheels on the back. Two of his three bumper steel retaining bearers had broken off. There was a little damage to his van at the rear where the spare wheels had rubbed.

Over happy hour drinks we realised we all had problems. Fortunately our van was built with corrugated dirt roads in mind, and built with all heavy duty running gear and independent suspension, but on heavily undulating highways, when there is flooding on the roadside, we reduce our speed down to 75kph.

We were told by Ford Australia to find a Ford dealer, but the closest was over 1,000km away. ECB bull bars came to our rescue though, and express posted a couple of replacement indicator units. The final caravan owner was able to have his bearers welded in town, and his departure was not delayed.

This experience taught me once again: drive to the conditions. A huge amount of pressure is transmitted to the frame and suspension of a caravan when it goes over humps a little too fast. So slow down and save yourself some bother.

YOUR SAY: Do you alter your driving technique to suit the road and weather conditions? Would lots of rain or an undulating road cause you to take it a bit slower?