BLOG: GRAFFITI - THE GOOD, THE BAD AND THE UGLY

HOW DO YOU FEEL when you’ve driven for hours to a remote spot, only to find the natural beauty defaced by some mindless halfwit with a marker pen?
You probably feel the way we felt when we paused to enjoy the view from Bob’s Lookout, on the Mulligan Highway between Cairns and Cooktown.

This 340km drive is through the dry, uninspiring inland country of north Queensland, and lookouts are rare.
Bob’s Lookout, at the top of the Desailly Range, provides a view over the valley and ranges to the south.
It’s a nice break in an otherwise uneventful drive and you’ll often find a fellow RVer there for a roadside chat.

Most folks enjoy the view, take a few snaps and wander on without leaving any sign that they’ve passed.
However, some egocentrics apparently feel the need to record their presence for posterity, and have painted their names, home towns, and unmentionable messages on the rocks and guardrail.
Judging by the date, one couple had left their ink inscription just days before.

Of course, graffiti isn’t limited to natural features.
Buildings and facilities enjoyed by travellers and the public are also defaced, costing councils tens of thousands of dollars to clean up.

I just don’t understand what they get out of it.

This sort of stuff is vandalism, pure and simple, and is a punishable offence under state law.
In Victoria, for example, graffiti vandals can face two years jail and a fine of $26,000.
Police can also issue on-the-spot fines of $550 to anyone carrying spray paint cans which aren't demonstrated to be for legitimate purposes.

Graffiti is nothing new.
It dates back to ancient times, when it was used to express social and political messages.
However, I don’t give a damn what its pedigree is. I reckon there’s no excuse for defacing nature or other people’s property.

THE CLEVER KIND OF GRAFFITI

I must reluctantly admit, though, that some graffiti can be witty and humorous. One example is in the Daintree region of tropical north Queensland, where cassowary warning and speed bump signs have been doctored to show a before and after image of an unfortunate cassowary.
There’s no excuse for defacing a road sign, particularly as it can result in dangerous situations, but I’ll bet that’s one of the most effective cassowary warning signs around.

In other places, graffiti has achieved iconic status and endured for decades.
I’m talking about the stick image of The Saint painted on the sheer cliffs of Castle Hill, above Townsville, Qld. It was painted in the early 1960s by university students dangling more than 200m off the ground after a night of partying, and has survived to become one of the enduring symbols of the city.

I don’t imagine too many readers of this blog are practising graffiti artists, but I’ll bet plenty of readers have seen unsightly graffiti across Australia. 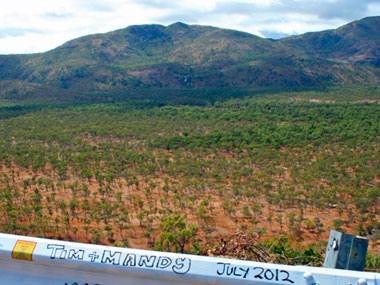 Have your say. Is there such a thing as “good” graffiti?