LIVING THE DREAM: TIPS FROM THE ROAD

We asked six real couples for their top tips after their long trips.

Judy and Glenn Marshall
If you want to know anything about the history of NSW’s High Country huts, Judy and Glenn Marshall are worthy authorities. Judy’s uncle, Tom Paton, built Paton’s Hut on the Kiandra side of Tooma Dam in 1932. The Marshalls have been exploring the huts for 26 years, so it’s no surprise they favour the High Country, with Nankervis Hut, near Geehi in the Kosciuszko National Park, earning the title of their favourite destination.

“We keep thermos-style drink bottles in the car to maintain hydration, as they keep the water cool all day,” Judy said. “A backpack, stored in the car, is used for on-foot explorations to carry water, snacks, a GPS, camera and any maps.”

In terms of the essentials, Glenn won’t leave home without his iPod, which stores endless hours of music for listening pleasure in the car or the van, streamed wirelessly to the stereo. While it’s great to escape into the mountains, the Marshalls like to keep in contact with the outside world, so a mobile phone, laptop and modem dongle are standard communications fare. The laptop also serves as an entertainment device, playing DVDs in the evenings.

Geoff and Annie Wilcox
Geoff and Annie Wilcox are retired, but have the enviable job of working for Hema Maps as field surveyors, travelling across the country collecting data for use in all the latest maps, guides and GPS products. Hema manufactures the HN5i Navigator GPS, plus a range of touring guides, maps and books.

Last year, Geoff and Annie did a six-month stint in the Hema Map Patrol, carting around their Coromal Pioneer camper to survey WA and NT. They recently upgraded to a 5.67m (18ft 7in) custom Goldstream dual-axle van with ensuite for additional touring comforts.

When on the road, Camps Australia Wide 6 is great for finding free camps.

“Direct debit as many bills as possible,” Annie said. “This takes the worry out of forgetting them. We also get bills by email, as sometimes we don’t get our mail for months or more.”

“If your three-way fridge is struggling on gas, check the orifice, it may need cleaning,” Geoff said. “A 15-minute soak in alcohol or metho will clean things up. Just don’t be tempted to poke anything in the orifice, as it is easily damaged.”

In terms of essentials, a laptop running OziExplorer using digital maps hits the top of their list.

John and Lorraine Holloway
John, Lorraine and border collie Brodie have been exploring new horizons since selling their home to live life on the road. They have no end date for their travels; rather, they will be governed by their ongoing ability to hook-up the van.

John has managed caravan parks in the past and is using that experience to gain similar work on the road.

Their next gig is a three-month stint at the Prairie Hotel in Parachilna, SA, acting as caretakers for the caravan park and cottages.

A 6.4m (21ft) Kedron All-Terrain Vehicle van with ensuite provides cross-continent accommodation, regardless of the road surface, while providing home comforts. John and Lorraine are fully self-contained when camping, courtesy of large water tanks, plenty of solar and a large battery capacity.

“Travelling with a dog can have restrictions, but there are alternatives and many caravan parks, motels and B&Bs now allow dogs,” Lorraine said. “If you want to go into national parks, local vets will usually provide day-boarding and some caravan parks offer a similar service.

“Consider installing a good quality 12V fan in the back of the vehicle where your dog travels. Air-conditioning is not as effective as it is in the front seat and all the surrounding glass can make it like a sauna.”

In terms of essentials, the Holloways rate a personal toilet and shower, laptop, mobile connectivity, and a comprehensive tool kit and spares as key requirements.

The Holloways have been on the road since July 2011, racking up 17,000km to date. Their journey has taken them through south-east Qld, Birdsville, Bowen, through NSW to Mildura, into SA via Burra, en route to Parachilna. 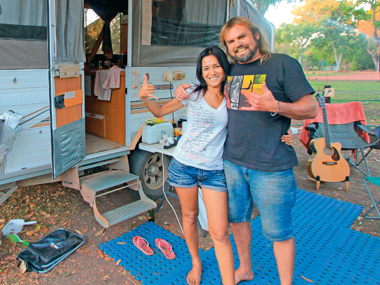 Rex and Bev Fettell
Rex and Bev, from Burwood, Vic, have been retired for 15 years and live a happy lifestyle, roaming around the countryside for four to five months each year.

During the cooler months, a 5.8m (19ft) Scenic van provides comfortable accommodation, while a home-made camper trailer gets the nod for exploring the High Country during summer. They have seen most of Australia over the years, but favour the High Country and mountainous regions in each state.

When touring in their camper trailer, they like to stay in rest areas with water, a fireplace, picnic tables and wide open spaces, where they can appreciate the forests, birds and the great outdoors.

“The one thing we can’t do without is a clean campsite,” Rex said. “We’ll clean up other people’s rubbish if we have to, but would prefer if others were self-sufficient in this regard and came prepared to take their rubbish home. A reliable car and detailed maps also rate highly.”

A toilet is not necessarily essential for these two. In fact, anywhere with a flush toilet is considered a luxury. One of the joys of travelling is enjoying the experience of meeting new people and sharing information. All you need to do is to make conversation and information flows freely, they say.

Sue Tregellis and David Dickson
Sue, Dicko and dog Zac, are veterans of life on the road, having retired and sold their Melbourne home in 2000. Driven by ill health, the family set out in a 6.4m (21ft) van to see as much of the country as possible.

Their first lap of Oz took them more than six years to complete, with the next four years spent meandering inland. In 2010 they purchased an 8m (26ft 3in) custom-built Truelux fifth wheeler, which gave them a lot more space and luxury. So it was fitting that they began another lap, this time travelling in the opposite direction.

The Dicksons occasionally leave their fifth wheeler to take houseboat trips, or pack their tent to explore more remote areas, unencumbered by the van. One highlight was a two-week cruise out of Broome with seven other couples, exploring the Kimberley from the sea.

The fifth wheeler brings many home comforts to make long-term travelling an easy proposition. Large water tanks, solar panels and a washing machine mean they can camp for long periods.

They often oblige friends and family by house/farm-sitting in lieu of a place to park the van.

“It’s a win-win situation. We feed the animals, mow the lawns, do a few jobs and then relax to enjoy the surroundings,” David said.

Mick Parker and Ning Chailert
Mick and partner Ning are relatively new to the camping scene, having purchased their first 4WD and Jayco Eagle camper a few years ago. After 30 years in the construction industry, Mick threw in the towel to follow his passion for music and now plays in a popular band in Perth.

Mick’s recent travels took him from Perth to the Gove Peninsula in the north-east corner of Arnhem Land, travelling via Broome, Cape Leveque and Kakadu. He picked up a few gigs on his way north to supplement his travel budget and met with partner, Ning, in Broome, who shared part of the journey before Mick forged on alone through Arnhem Land.

“Don’t plan too far ahead – perspectives change and you may find you need more time in a particular place,” Mick said. “Slow down and take time to appreciate the surroundings. There’s a lot to see and sometimes two or three days isn’t enough to really appreciate what an area offers.”

Mick regards a camera and a guitar as essential travel items.