MY SON-IN-LAW has a favourite phrase he uses when we are set up on the banks of some lake or stream and I hook up my antenna to my wireless modem and log on to the internet. “That’s not camping!” he cries.

We -- myself, my youngest daughter and my son-in-law --do a lot of things that purists may consider to be non-camping, but we always enjoy our weekends away together and for Easter we were joined by my son from Adelaide. It was cold on the shores of Rocklands Reservoir, and his non-camping solution was two hot water bottles in his tent bed.

The water for the hotties was heated on a real campfire, so that was real camping, I guess. The chainsaw used to cut firewood was probably not camping either but boy, does it save work.

I spotted a butane fuelled imitation campfire on an American camping website. I can imagine the outburst if should I turn up with one of those.

One night after dinner, we made bread and butter pudding in the camp oven. That was camping. Delicious! Son-in-law – a meat and veges man – was not amused as the milk stained his precious camp oven.

WHAT DO YOU SEE, WATSON?

Do you remember the old joke about Sherlock Holmes and Dr Watson going camping? Holmes asks Watson what he sees and the good doctor replies with a detailed description of the heavens. “And what do you see, Holmes?” he asks. “I see some low-life has stolen the tent!” Holmes exclaims.

In our case it was the toilet tent! An early morning visit found the toilet tent gone. Who would pinch a toilet tent? we asked. All’s well that ends well, I suppose, as the tent was later discovered neatly folded in another campsite. They thought a friend who had left the previous day had forgotten it. So they said...

I have a hot shower every morning using my great Coleman Hot Water on Demand unit in my shower cubicle that fits on the side of my little Mercedes Sprinter. That’s after my wake-up cup of coffee made with water boiled on my Gasmate portable stove, of course. Then it’s often bacon and eggs cooked by son-in-law on a Hot Ozzie Barbie and, for a special treat, pancakes cooked in my Scanpan.

Maybe it’s not camping, but it’s certainly a great start to a real camping day in the great outdoors. 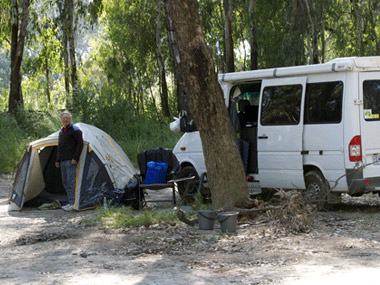 Share your thoughts on the phenomenon of non-camping below...