Blog: Van Parks with a Twist

THIS TRIP, DENYSE and I have come across several van parks that offer something a little different. Here are three NT spots you might like to visit yourself...

This park is in Mataranka, NT. They have a billabong with eight huge barramundi that have been trained to eat pilchards. Each day at 9.30am and 1pm the owners present a great show in which kids can "catch" a barra, by loosely tying a piece of bait to a fishing line, which the trained barra then jump up and steal. 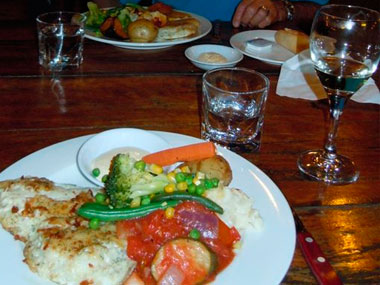 The climax comes when the park owner catches one of these huge fish in his hands and holds it up for the audience.

There is also an open-air restaurant, where fresh, wild-caught saltwater barra is served. This remains one of the best barra meals we've had, and the restaurant was full every night we were there.

Also look out for the large billabong at the rear of the camping area. There were a heap of water birds on it early in July.

This campground on the 11,800 sq km station lies around 100km north of Tennant Creek on the Stuart Highway. The historic cattle station campground has recently re-opened after it was bought by the Indigenous Land Corporation due to its many sacred sites.

Excellent spring water is available to each site — a rarity in these parts. There are hot showers, toilets and a laundry. One TV station is available, depending on which one the manager wants to watch!

Check out the original mud brick station homestead, and the waterhole at the base of an escarpment. You can either walk the 2km or take your fourby.

Valda and David have done a marvellous job getting this camp up and running again. It provides an excellent overnight stop after driving the Barkly, or even before doing it. Fees are $20 for two.

This is a good stop as an alternative to camping at Pine Creek before going into Kakadu NP. It lies just 2km from Pine Creek on the Kakadu Highway.

The park is based on a race track, but there is only one meeting each year. There is also a golf course adjacent, and clubs can be obtained from the office. Fees are $5 for a whole day's play. A karaoke competition was held each evening we stayed, with mainly music suitable for grey nomads. This entertainment commenced at 7pm and ended around 9pm: just right for us to get a good night's sleep.

Dinner is cooked each evening in the huge open-air building, if you wish to eat there. A small bar is opened at 4pm.

Powered sites are available for just $8.50 per person, but the place was full each evening we were there, which was late June. There are also unpowered sites all around the race track. Hot bush showers, toilets and a laundry are available. On site caretakers look after the place. I could find no phone number, just get there early!

Oh, and the name... During war years, this place was a large army base, and this was where a few women plied their trade. The saying goes that if you wanted a bit of pussy, you had to cross the flats.