Aussie vanner invents a way to bring his tinnie on tour

AUSSIE VANNER INVENTS A WAY TO BRING HIS TINNIE ON TOUR

IT WAS TEN years ago that keen traveller Gus Hummel took an extended trip with his brother, and both their wives, and realised something was missing from the holiday. 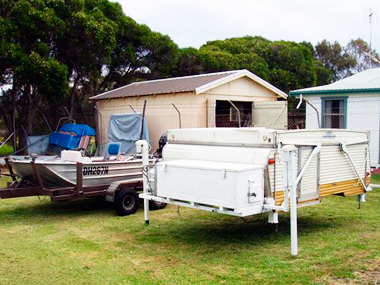 “The thing we missed most was our boat,” Gus said. “We all really enjoy fishing and getting out on the water.”

Chronic back problems meant Gus and his brother were forced to put their travel angling plans on hold. After all, what good was it putting a tinnie on their tow vehicle's roof racks when neither of them could get up there to take it down, even if they used mechanical lifters?

But Gus soon saw something in a caravan park in Georgetown, Qld, that made him think his dreams of travelling with his boat were still alive.

“A 4WD tray-back campervan pulled in next to us and once he got the vehicle in the spot he wanted, the driver jacked up the van on the back of the ute then drove out from under it, before letting the van down to ground level,” Gus said. “At the time I had never seen anything like that, but it really impressed me.”

IT WASN'T LONG before Gus had his light bulb moment: “Why not put the van on top of the boat and pull the tinnie out when we camp?” He was soon drawing up plans and designs to get his project off the ground.

Eventually Gus bought a second hand trailer, which he rehashed to fit a 12ft V-nosed tinnie. He then bought a wind-up campervan and some electric jacks. Using his backyard as his workshop, Gus put the electric-lift campervan on top of the trailer and the Guso Trava Boat was born.

“When we pull up at a camping spot, we extend the jacks and lift the camper up, which separates from the boat trailer. We drive the boat and trailer away, then let the van down to ground level,” Gus explained.

“It actually works better than I expected. We have travelled everywhere with it and often have a very curious audience of campers. And my back has had no problems at all.”

Gus believes that many older RVers are likely to have back issues and may have trouble getting a tinnie off the roof of their tow vehicle. He wants to help out, and see that they're able to drop a line when they travel.

“I personally know of several examples of blokes with bad backs who have had to forego their fishing because they can’t handle boats on roof racks,” he said. “I recently met an elderly man in Cairns who was towing his tinnie and planning on heading north for some fishing. He was forced to stay in cabins, which was costing him an arm and a leg, because he couldn’t get up and down to remove his boat from a roof rack.”

Gus believes this method of detaching a van from a trailer has numerous applications. “Any camper trailer, roof-top camper, or something similar can be applied to this setup,” he said.

In the true Aussie travelling spirit, Gus wants to lend a hand to others like him. He's more than happy to talk to others and offer tips on how to fashion their own Guso Trava Boat. He can be contacted via email at vickigus3@bigpond.com.