The recent report from the Australian Competition and Consumer Commission (ACCC) makes sobering reading for the local caravan industry. The New Caravan Retailing document identifies concerns found with the conduct of some suppliers and manufacturers. It follows lengthy court proceedings in 2021 that saw our most prominent manufacturer, Jayco, fined for a breach of the Australian Consumer Law (ACL). Taking on our biggest builder was seen as a sign the government regulator was looking for a big scalp. However, by the ACCC winning only one of four charges, the proceedings didn't make the significant impact for which the government may have been hoping.

This latest report warns that the ACCC intends to broaden its scope to target the caravan industry and bring rogue builders and retailers into line. At the same time, the ACCC emphasises that the report attempts to provide guidance to ensure businesses in this market comply with ACL. While this might suggest there has been some confusion on the interpretation of ACL, there is a clear intention for a strengthening of powers to prosecute rogue players.

"A caravan can represent a significant financial and emotional investment,” ACCC Deputy Chair Delia Rickard said. “Some people save for years in anticipation of purchasing and travelling in a caravan. If something goes wrong, the harm can be significant.”

According to the ACCC, complaints about caravan purchases increased over the past five years, so a survey of owners and retailers was circulated in late 2021 and early 2022. Caravan World publicised the request for responses at the time. As well as the survey results, the ACCC sought input from suppliers and industry bodies. 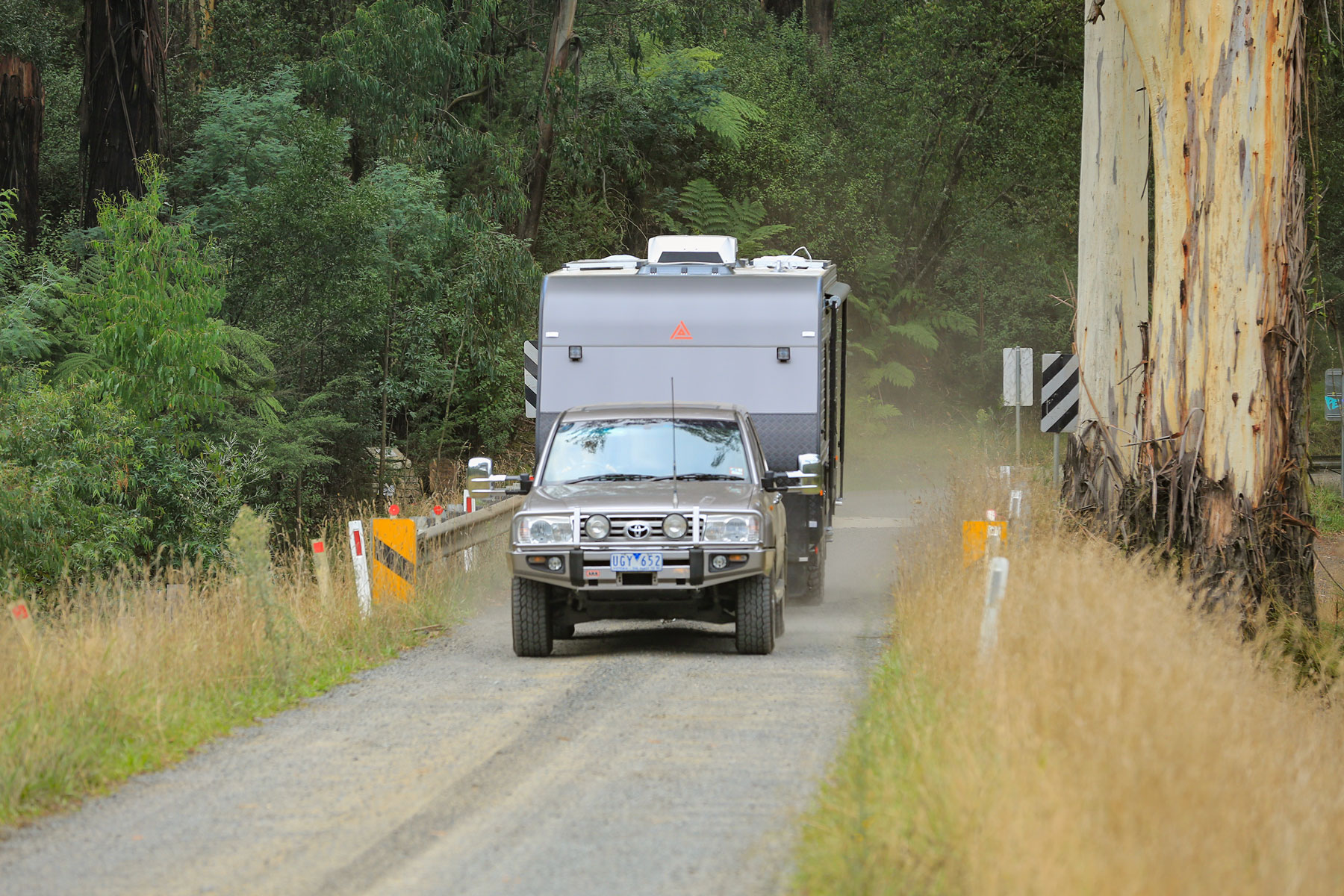 From 2270 responses, 80 per cent reported a fault with their van and half said the fault was major. Among other things, the law determines a major flaw as something that would have stopped the purchase of the van if known. The report recognised that anyone with a negative experience was more likely to respond to the survey and that the number of respondents is low as a proportion of vans sold yearly.   Nonetheless, the ACCC sees the results as an indication that problems in the industry are not uncommon. The caravan industry includes a large manufacturing base producing around 25,000 vans annually. The majority come from Jayco, Avan and Apollo. In addition, the survey uncovered more than 150 other brands purchased during 2021. So, while the industry is the largest vehicle manufacturer in Australia, it is fragmented into many business models ranging from sophisticated corporations with hundreds of employees through to family operations with a handful of workers.

Around a third of buyers (667) claimed to have been misled during the sales process. Of these respondents, 313 said the issue was around warranty, with most of these denied repair because the warranty period had expired or exclusions applied. But consumer guarantees apply regardless of the manufacturer warranty, and the law expects a caravan should be free of significant defects for several years. Should a major fault arise during this period, the buyer is entitled to receive a refund or replacement.

"If your caravan has a major or minor consumer guarantee failure, you may be entitled to a remedy even if the warranty provided by the business has expired," Ms Rickard said. Some buyers reported that they needed to sort warranty repairs with the respective parts supplier for items like appliances or even the chassis. ACCC takes a dim view of this. The law clearly states that the supplier is responsible for the warranty on all the components in the van. Any provisions in warranty documents that suggest the manufacturer warranty doesn't cover parts are considered misleading and open to prosecution.

Buyers were also misled about warranty backup from some suppliers. Advice that there was Australia-wide service networks for repairs proved to be incorrect, resulting in delay and cost to some owners.

Ninety-five buyers reported discrepancies in the weight specifications on the compliance plate. As a result, the carrying capacity of the van was limited, or they needed to purchase a larger tow vehicle. The report noted that overweight vans could pose a safety issue. Suppliers must advise the weight correctly and inform customers of the effect of adding accessories or making modifications.

A further 26 buyers noted that offroad ability was overstated. Unlike passenger vehicles which spell out offroad use in the Australian Design Rules, the caravan industry has no standard definition for offroad use. This can cause confusion about where a van can travel. However, as we advance, the sales process needs to explain restrictions on travel. The van must match the description and must be fit for purpose. However, without a precise definition, customers should always read warranty documents to check on restrictions that would avoid a warranty claim. Many builders will not warrant their van for use on four-wheel drive only tracks, for example. But conditions for driving on corrugated roads might mean describing such a van as an offroader is misleading. We should emphasise that the report concludes that a guarantee of quality does not mean the van must be indestructible. So, for example, your ACL rights might expire if the damage is due to abnormal use.

Deliveries are too slow

Many complaints were about delivery delays, with 37 per cent stating a six-month wait and 136 who waited for more than a year. Long timelines have blown out even further this year, but the report recognises valid reasons. Over the past two years, the local industry has struggled with lockdowns, supply chain issues and an unprecedented demand due to international border closures. So, while the law obliges sellers not to accept payment for goods it knows won't be delivered within a given timeframe, this does not apply to businesses where the delay is outside their control. Even so, the regulator demanded that retailers must be honest about delivery dates and need to communicate delays to customers.

Suppliers are stuck in the middle

The survey included responses from 67 suppliers, most of whom reported problems in being paid by the builder for repairs. Some said that the lack of manufacturer support made them reluctant to undertake repairs. So, while manufacturers are obliged under ACL to indemnify their dealers, many refuse.

The diversity of components that go into a caravan magnifies the problem for dealers. The ACCC has pointed out that the industry is different to car manufacturing because a van is built from hundreds of separate components from separate manufacturers, some of which are not engineered especially for the environment of a house on wheels. Supply chain issues also cause problems in identifying the original supplier of parts, causing more delays and cost blowouts.

Without support from the builder, the suppliers are in a difficult space dealing with the customer. Not wishing to tarnish their brand, they are often obliged to meet repairs off their own bat, which may include high labour costs. Delays in dealing with warranty are frustrating for customers, but many builders demand proof of the damage and that the van wasn’t misused before they agree to a remedy.

The report emphasises that for consumer guarantees to work effectively, manufacturers must meet their legal obligation to pay suppliers for the cost of making good any failures.   However, the way the law is structured, the onus to supply a remedy to the customer is on the supplier even if no reimbursement is forthcoming from the builder. And even though the supplier can take the manufacturer to court, this can create ongoing cost problems and the fear of losing an agency. Furthermore, if a supplier relies on one manufacturer for stock, being cut off from supply can be financially devastating.

Resolving complaints can have an enormous emotional and cost burden on consumers, and many buyers choose a remedy that doesn't cover the total cost of repair to avoid conflict or save time in the dispute resolution.

The report concluded that ACL needs strengthening to improve the effectiveness of the consumer guarantee. Currently, failure to fix problems or provide a refund is not a civil penalty. Instead, consumers must take complaints to their state consumer group or the local court for settlement. Showing just how difficult and emotionally taxing this process can be is seen in only 12 of the complaints in the survey resolved by the courts.

At the same time, the retailer has little recourse if a manufacturer refuses to pay for repairs or a refund. Because the current situation means there is little incentive for unscrupulous businesses to comply with the law, the government is investigating new penalties against retailers who refuse repairs or refunds and also against manufacturers that won’t indemnify their dealers, or that retaliate against them.

Change is coming that will clarify ACL. Combined with the new Road Vehicles Standards Act in mid-2023, consumers should have more confidence when buying a caravan. In the meantime, buyers should do their homework about looking out for brands to trust. New players are joining the market, and not all have the knowledge and infrastructure needed to build a quality van and support it with a warranty for the years to come.

One thing is clear. The ACCC is monitoring the caravan industry closely, and the report is a warning that manufacturers and suppliers should heed. The court action against Jayco may have been a warning shot, but the next round will see the government regulator strike with guns blazing. Any builders and suppliers, both large and small, that are not doing the right thing need to lift their game.

WHY RVSA EXTENSION IS BAD FOR THE CARAVANNING COMMUNITY