Mark Daffey — 23 September 2022
Karijini National Park in WA’s Pilbara is filled with world-class attractions, the likes of which are found nowhere else in Australia.

Karijini National Park went by another name when I last visited in 1991. Back then, it was called Hamersley Range National Park, after the rugged, resource-rich peaks in the Pilbara region of Western Australia. My then-girlfriend (now wife) and I toured around for a week in a 4WD, camping in a no-frills two-man tent. The park adopted its Aboriginal name shortly after our visit.

This time, I’m seeing the ranges as part of a tour with hiking company, Life’s An Adventure. It includes spending two days around Exmouth to swim with whale sharks off Ningaloo Reef, then a visit to some canyons before we stopover for a night at Cheela Plains Station en route to Karijini.

Except for one day, this isn’t really true hiking though. It’s more of a sightseeing tour where we get to stretch our legs each day. The main attractions inside the national park are gorges and waterfalls, and the only way to truly see them is on foot. Sure, there are lookouts over most of those gorges and waterfalls, but otherwise they all require you to sweat a little to get right down into them. Backpacks aren’t necessary, nor are hiking boots. Better are grippy shoes that you won’t mind getting wet. Any sure-footed, able-bodied person who doesn’t mind scrambling over a few rocks or wading through the odd rockpool can do it.

And let me tell you, it’s worth it. These gorges are stunning, world-class attractions, with each of them rewarding those who have made the effort to descend into their mirky depths with a refreshing dip in some of the most wonderful natural rockpools imaginable.

Karijini is one of the oldest landscapes on the planet – an ancient tableland broken by faults and gorges that are estimated to be billions of years old. Banyjima, Kurrama and Innawonga Aborigines have occupied the land here for more than 30,000 years, with explorer Francis T. Gregory recognised as the first European to set eyes on them in 1861.

The ranges contain roughly 80 per cent of Australia’s known iron ore reserves, with mining there largely pioneered by the Hancock family during the 1950s. In 1952, Lang Hancock identified the existence of the world’s largest iron ore deposit near his Pilbara homestead, just east of what would later become Karijini National Park.

At the time, ore reserves were said to be so vast that they could supply the entire world. But Hancock kept the discovery secret until after Australia’s iron ore export embargo was lifted in 1960. Today, the mining tenement that was eventually developed by Rio Tinto earns billions of dollars in mining royalties for Hancock’s daughter, Gina Rinehart, who currently ranks as Australia’s richest person.

The magnificent gorges and waterfalls of the ranges are like nowhere else in Australia, and in 1969 more than 6000 square kilometres, an area nearly three times the size of the ACT, was designated as a national park. Theoretically, mining should have ceased inside the park boundaries, and the granting of new mining leases should have come to a grinding halt. But money talks, and in 1991, a thin slice was excised from the park to allow for the development of the Marandoo Mine and railway line owned by Rio Tinto.

The railway line splits the national park in two. The southern half is largely inaccessible, while the gorges and waterfalls the park is known for are all contained in the section that’s north of the railway line.

We’re up early for the 200km drive from Cheela Plains Station to Dales Gorge. We pass through Paraburdoo along the way then briefly stop to refuel and drop in at the Visitor Centre in Tom Price. Throughout the journey, water pools by the side of the road and the countryside is greener than usual, courtesy of recent rains. We’re concerned that some of the gorges or roads may be closed but are buoyed by the news that all are open, with one exception - the Nanutarra-Munjina Road to the Hamersley Gorge. But there’s an alternative route following the Rio Tinto-owned Railway Road. The catch is that we require a permit to drive on it - something our guides have managed to arrange.

Because of various closures that can take place at short notice, our itinerary is subject to change. A visit to Dales Gorge on our last morning is brought forward. Hamersley Gorge is added, replacing Knox Gorge and Kalamina Falls. And visits to Weano and Hancock Gorges are postponed from our first day to our third.

In hindsight, an extra day or two in the park would have been appreciated so we wouldn’t miss anything. I would like to have had more time to explore the interconnecting pools in Joffre Gorge too, or to laze about around Handrail or Kermits Pools in Weano and Hancock Gorges.

On our first afternoon, we walk just under five kilometres at Dales Gorge. We initially follow the flat, wheelchair-accessible rim trail as far as the Circular Pool Lookout, then descend to the bottom of the gorge until we eventually reach Fortescue Falls. Normally, we would continue upstream to Fern Pool but not this time; it’s closed for three more weeks while structural improvements are made around it. 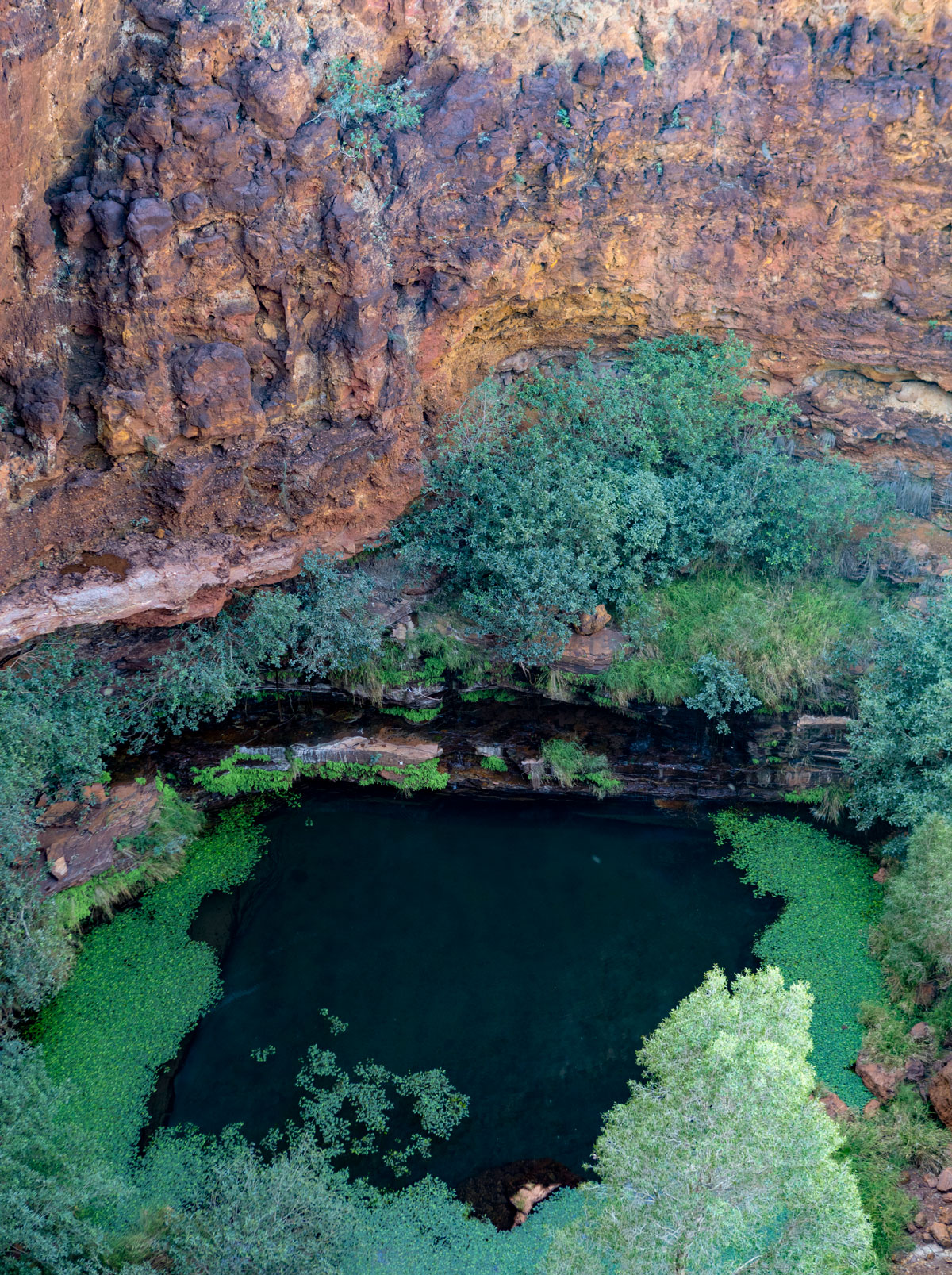 We’ve come the long way to Fortescue Falls. Most visitors take the easier option, descending directly from the car park via a metal stairway. Many then strip down to their bathers for a swim or a shower beneath the waterfall. But the longer route is a lovely, shaded walk, passing beneath sedimentary layers of rock betraying a time when these ranges were buried beneath the sea. Our second day is when I most feel like I’m on a hiking trip, traipsing up an exposed ridgeline to the 1235m summit of the state’s second highest peak, Mt Bruce. It’s a 10km walk that takes six to seven hours. However, plenty only go as far as the Marandoo Lookout, while others turn back at the foot of a sudden incline which we labelled Hillary’s Step after the famous stumbling block just below the summit of Mt Everest. Either point affords sweeping views over the surrounding ranges and the Rio Tinto mine. 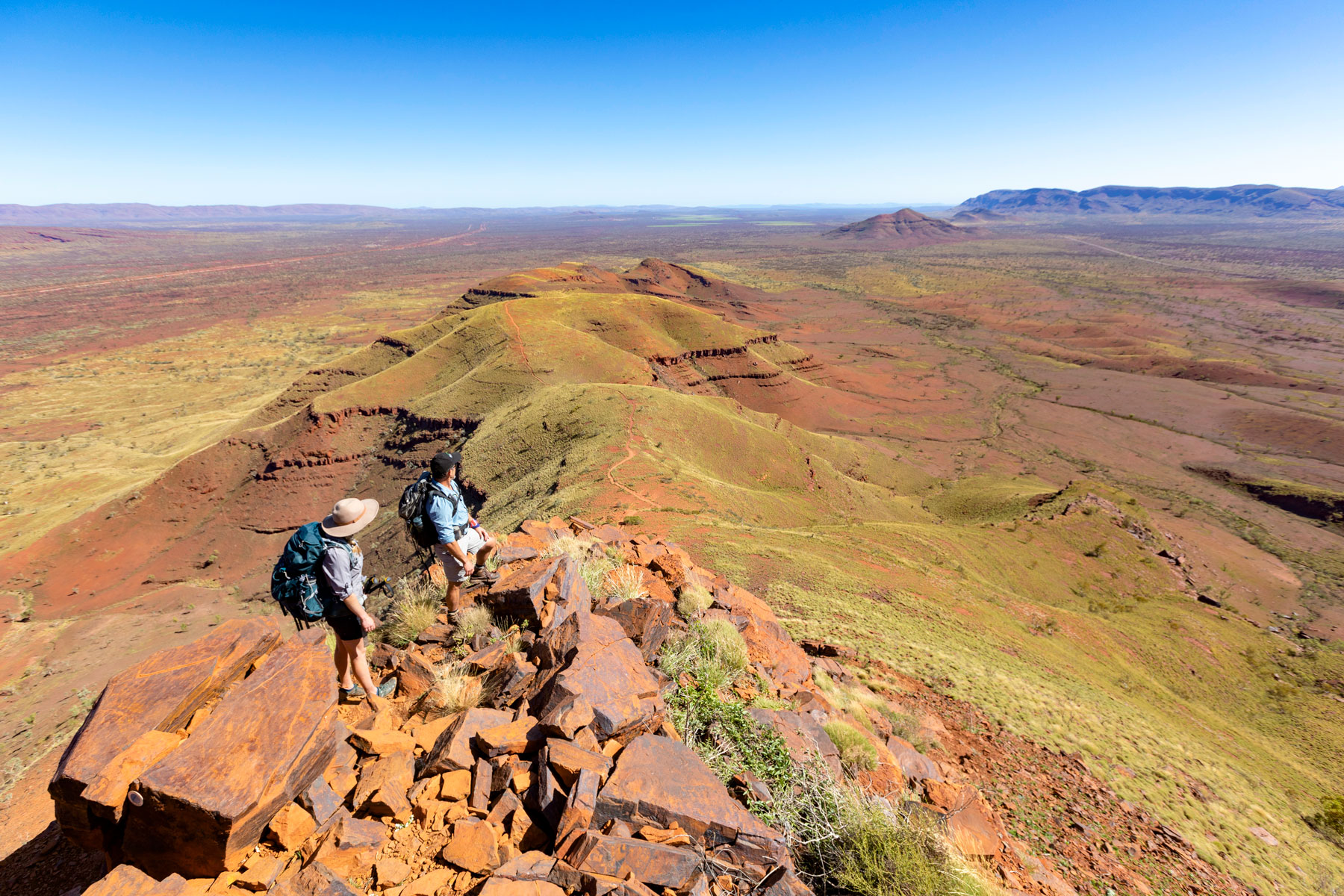 We have plenty of company when we cool off in the pools beneath Joffre Falls at the end of the day, though I expect very few of them have earned it like we have. We’re fortunate to be staying at the Karijini Eco Retreat, one of two locations where visitors can camp inside the national park, and Joffre Gorge is a convenient 10-minute walk from our luxury safari-style tents. Lookout platforms also jut out over the gorge from opposite sides. Our third day in Karijini ranks as my favourite, visiting Weano and Hancock Gorges. Both require steep descents. Weano is the easier of the two, down a metal stairway. The fun starts thereafter. Depending on how much rain has fallen, getting to the cylindrical Handrail Pool may entail getting your feet wet and the rocks can be slippery. It’s well worth it though – a real adventure, with the promise of a swim at the end. Close by is Hancock Gorge. It’s separated from Weano Gorge by a day parking area that includes several picnic shelters. Oxer Lookout also overlooks the two gorges there. If you’re not confident of handling the descents, the short walk to the lookout is a suitable compromise. Entry to Hancock Gorge follows a rocky stairway that’s too steep for two of the more elderly people in my group, prompting them to turn back. The rest of us continue on, squeezing between vertical rock walls until we’ve reached Kermits Pool - so named because of the emerald-coloured water. A park ranger tells us these last two gorges are usually the first to be closed off whenever rain is forecast because of the potentially fatal threat of flash flooding. They’re also where accidents from slippery rocks occur more often, so don’t be surprised if a park ranger appears at either; they’re there to monitor our safety.

By far, the easiest gorge to hike down into is Hamersley Gorge. The flipside is that it’s a two-hour drive from our camp, including having to wait at a railway crossing for 10 minutes while an ore train rumbles past. A couple of my companions attempt to count the number of carriages being hauled along behind the train’s diesel engine but both give up before they’ve finished. Numerous waterfalls connect a series of pools inside Hamersley Gorge, though easily the most photographed is the picturesque Spa Pool. It’s possible to hike across the rocks to the pool, though most take the easier option of swimming there since they all plan on getting wet in the pool anyway. The queue to enter the pool is constant so no one stays long unless they arrive early or late in the day. We’re no different, keeping our visit brief thanks to impending flights from Paraburdoo back to Perth that afternoon. If only we had more time.

The park is the traditional home of the Banyjima, Kurrama and Innawonga Aboriginal people. The Banyjima name for the Hamersley Range is Karijini. Aboriginal land management practices, such as 'fire stick farming', resulted in a diversity of vegetation types and stages of succession that helped determine the nature of the plants and animals found in the park today.

Getting there: Karijini National Park is a 640km drive from Exmouth, 500km from Karratha or 340km from Port Hedland. Coming from a southerly direction, Karijini is 360km from the Northwest Coastal Highway turnoff at Nanutarra. The Karijini Visitor Centre is located close to the Dales Campground.

Where to stay: Free camping is not permitted inside the national park so you’re confined to staying at the National Parks-run Dales Campground and the privately-owned Karijini Eco Retreat. Both are 2WD accessible and suitable for all types of RVs.

Dales Campground is located close to Dales Gorge and the Visitor Centre. Generators, campfires and dogs are allowed and facilities include barbecues, toilets and showers, picnic tables, mains water, dish washing tubs and a dump point. Campsites for two adults start at $11 per night.

Karijini Eco Retreat is more upmarket. It contains a restaurant and bar, and the option of staying in luxury tented accommodation. Nearby, Joffre Gorge is easy to walk to, while each of Hancock, Weano, Red and Knox Gorges are short drives from the camp. Facilities include a kiosk, camp kitchens, ablution blocks and a Telstra public payphone (mobile phone coverage only through Optus). Unpowered campsites for two adults cost $44 per night.

During peak season, from June to September, a two-night maximum overflow camping area with pit toilets is also available. In all cases, bookings are essential.

Best time to visit: May to September, when temperatures are milder and rainfall less frequent. Keep an eye on the weather at all times as heavy rains can cause road and gorge closures.

ONE WAY ADVENTURE TO THE DAMPIER PENINSULA, WA