One Way Adventure To The Dampier Peninsula, WA

Julia D'Orazio — 16 September 2022
The Dampier Peninsula is home to adventures of a different kind.

A pearly white smile comes to mind when reminiscing about a recent trip to Western Australia's Dampier Peninsula. Not mine, of course. That natural high beam belonged to Jawi tour guide Rosanna Angus. She's one of the Dampier Peninsula's impassioned tour guides offering authentic indigenous experiences in a region that sticks out like the country's left thumb 220km north-east of Broome.

Previously it had been a long, bumpy ride along an unsealed Broome-Cape Leveque Road to access the peninsula's bounty of natural and cultural wonders. This tiny slither of the Kimberley is home to colourful landscapes such as flaming red coastal cliffs, indigo waters, sweeping white shores and salt plains, and lime mangrove forests, to name a few highlights.

Thankfully these days, it's all smooth sailing along the now sealed highway to reach the peninsula's brightly hued shores. There's no excuse to have FOMO (Fear of Missing Out) with extraordinary encounters such as hunting mud crabs with spears, navigating mangrove mazes, and overcoming tidal movements to explore far-flung islands. These outback adventures are far removed from the usual, stock standard destination 'things to see and do' checklist and yet are all within easy reach. And adding to its accessibility factor from Broome is the peninsula's flashy new campground just off the main highway. Bright smiles aside, in the Dampier Peninsula, true spectacles await. So, what are you waiting for?

Calling the Dampier Peninsula home for a few nights has become much easier with the recently-opened Djarindjin Campground along Broome-Cape Leveque Road. The modern campground on Bardi country is part of 'Camping with Custodians' – an Australian-first network of campgrounds on Aboriginal lands. Each campground is owned and operated by local communities, providing employment and generating income for Aboriginal people. A win for all. With the renowned wilderness campsite Kooljman closed for repairs, Djarindjin is firming up as the region's new favourite base camp. Djarindjin is one of four major Aboriginal communities along the peninsula. On its doorstep are the region's renowned attractions: Cygnet Bay Pearl Farm (27km), One Arm Point (24km), Lombadina (2.8km) with Beagle Bay (75km) slightly further afield. Next door is Djarindjin Roadhouse offering hot takeaway food for lazy days, essential items, and a tour booking office to make exploring the region a stress-free exercise.

Besides its convenient location, campers are in for a real treat. Djarindjin boasts 37 powered sites and 10 unpowered sites offering ample room. Its first-rate facilities include an indoor camp kitchen and multiple ablution blocks housed in sleekly designed shipping container-like builds.

With the network's aim of deepening connection to country beyond lodging camp pegs, key fixtures in each campground include a yarning circle and fire pit. These communal spaces encourage guests to engage with members of the local community passing through. Interactions may involve hearing local elders tell Dreamtime stories, making damper, and learning about local culture. I quickly appreciated the campground's advantageous location, with most tours in the region starting from the Djarindjin Roadhouse. Locking in tours early is a must if wanting to make the most of exploring the region's remote areas, as it's a numbers game to get organised outings confirmed. Remember the feeling of FOMO? This is not the time and place for it. Promise.

Tagalong for the ride

The Dampier Peninsula is full of lively characters, and Bardi man Brian Lee is one of them.

Combined with his tongue-in-cheek banter and traversing untapped coastal gems on a topsy-turvy ride, Brian's tours are the stuff of legend. 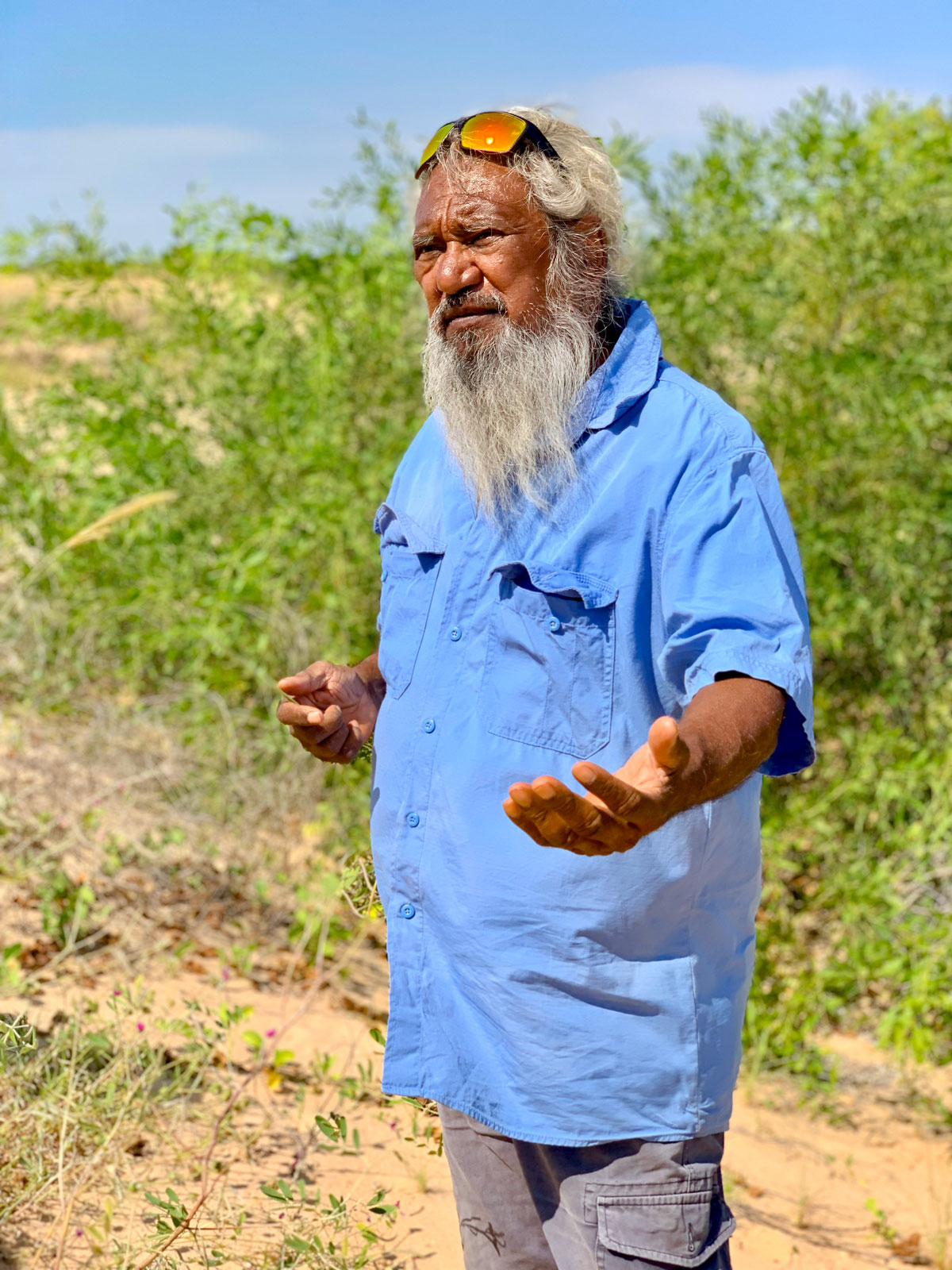 Brian, with his furry sidekick Roldo, valiantly led five 4WD vehicles with eager drivers (myself included) along Cape Leveque. With Kooljaman closed, joining Brian for a full-throttle adventure is the only way to access parts of the famed northernmost tip. Not that you need an excuse to tag along.

Goodbye, ochre-coloured tracks. Tyres down, we blitzed along the sugar-white coastline until we found our patch of sand. Briefly abandoning our wheels, we got to know our tribe mates for the day with a quick dip in the Indian Ocean. Talk about feeling like being on an episode of Survivor. We were all happy to float on with no other souls in sight. As we travelled from coast to creek, Brian shared his cultural perspectives of country, the survival of local tracks and Dreamtime stories. We soon arrived at our final destination, an outback oasis Brian's family has frequented for generations, Hunters Creek. The setting was a real eyeful: aquamarine waters populated by lush mangroves and embraced by creamy dunes. But besides its good looks, there is much to do in this trove. The sun was beating down, and I needed respite. I decided to forgo the happenings on the mainland – fishing and spearfishing for mud crabs – and opted for a solo kayak ride around the serene waterway. Now, this would be something different, steering my way through mangroves. Would I get stuck? Would someone have to enter croc-infested waters to save me?

The worst-case scenarios – to get stuck or get eaten – didn't really register. As I carefully journeyed under the canopy of twisted jungles, cooling off under mangrove air-conditioning, I couldn't help but be in ultra-Zen mode. It was pure bliss.

Out of the woods, I saw the smoke signal to come back to shore and sample freshly caught mud crabs, mangrove jack, sweet lips, and emperor cooked over a Bardi-style campfire. Condiments and cutlery weren't necessary. My fellow tribe mates and I devoured Brian's catch, picking at the smoky seafood with our fingers and appreciating every bit of omega-three. Yum. Dessert came in the form of a zippy boat ride around the creek to spot native birdlife and the creek's other unspoilt nooks and crannies. From this point on, life couldn't get any sweeter.

The ways of the saltwater people

"This tour touches all the basis of survival," Bardi-Jawi tour guide Bolo Angus asserted on the walking tour through Lullumb on the east side of the peninsula. Here, we were taking a walk on the wild side, with Bolo giving us cultural insight and demonstrating the survival skills of his ancestors. "It's like a nursery this place," Bolo said as we trekked across expansive salt plains to arrive at vine thickets. Nature's assets were soon uncovered with Bolo foraging for bushtucker and bush medicines in the tangled woods. We followed his ways, taking sips of water from a small stream with a straw leaf, sampling berries, and washing our hands with nature's soap – a crumpled-up leaf mixed with water to produce foam.

In hindsight, we should've saved the scrubbing for later. This half-day tour was not a time to keep clean as we trudged through muddy terrain searching for the local delicacy, mud crabs. Spear in hand, Bolo excelled at his hunting game, spotting their thick claws through burrows of brownish sludge and making the great poke. Moments later, a dark brown mud crab the size of a dinner plate appeared at the end of the metres-long spear. Meal for two, perhaps? Our mud crab mission soon continued but not without its pitfalls. Careful trotting across interlocking mangrove roots felt like we were playing a game of 'the floor is lava'. The balancing act to avoid becoming a muddy victim was too much for some, with people stumbling through roots to sport the earth look. This was all in vain to have a scenic coastal cookout. But was the treacherous workout worth it?

As we slowly replenished our energy stocks, Bolo performed songs with traditional instruments. I managed to get goosebumps even with my skin enduring the blazing heat of the sun. But it was every kind of wonderful, so, yes, the mucky marathon was worth it.

Remember Jawi guide, Rosanna? Her tour is unforgettable just like that contagious smile.

The One Arm Point resident leads cruises to Sunday Island, a former missionary island located in King Sound. Its unique history is one Rosanna is committed to telling, being granted special access by the island’s traditional owners to whisk curious travellers far away. "The ancient story of a particular rock is hard to tell if you're not in the space. So, to take you all to Sunday Island, I'm alive, the stories come alive, their land, the landscapes come alive." Rosanna advised the tour group pre-sail.

Departing from Cygnet Bay, the half-day tour voyages through Middle Passage, observing the region's powerful tidal movements, toothed islands, and pristine coastline. Although touching on Bardi and Jawi culture, Rosanna mainly focuses on the island's history and how the people survived pre-colonisation in the area.

After making waves, we retraced Rosanna's family's footsteps at the remote Sunday Island. The former missionary settlement ran from 1899 until 1962 with all that remains of its controversial past including an impressive old barge landing, building ruins and a stone staircase carpeted with shrubs winding towards the island’s peak. It’s hard to fathom this settlement existed; a mission itself to get there, strenuous climb aside. The island’s true remoteness is felt at the top of the hill with widescreen views of islands and towering rocky outcrops dotting a sapphire sea.

We continued with a scenic boat ride around the island to arrive at a secluded cove. Now, this was heaven on earth. We were willing castaways, immersing ourselves in saltwater culture and enjoying a splash in placid waters. Ideas of island cocktails were replaced with damper and billy tea. A happy hour that nourished the soul. Despite Rosanna informing us of the island’s troubled past, her smile never left her face. Full of energy, enthused and just excited to showcase this remarkable and largely unknown part of the Kimberley. And after a grand tour around the Dampier Peninsula, it probably won’t leave yours either.