Mark Daffey — 23 August 2022
It has gorgeous beaches, an abundance of native wildlife and plenty of places to pull up a caravan.

Look closely at a map of Phillip Island and it’s likely to be your first indicator that this place is a little different to what you might have expected. The clue is in its shape, for the island bares more than a passing resemblance to a dolphin playfully jumping out of the water. Given the abundance of native wildlife roaming freely across the island, this could be considered prescient. Or maybe it’s just coincidence.

More than anything, Phillip Island is known for its little penguins. Of all the 18 penguin species found on our planet, these are the smallest. They’re arguably the cutest as well, and it’s here where you’ll find the largest colony anywhere on earth. An estimated 40,000 little penguins call Phillip Island home, with many returning to their burrows along the island’s south coast each night after spending weeks out at sea feeding on bite-sized pilchards and anchovies or jellyfish.

Easily the best way to see them is during the nightly penguin parade. For that, you’ll need to make your way down to Summerland Beach, near the island’s western tip. The time to come here is just before sunset, when the penguins raft together offshore, waiting for the cover of darkness. It’s only when night falls that the penguins feel safe from predatory birds like white-bellied sea eagles or Pacific gulls. The numbers of penguins appearing each night can vary from the 500 or so (counted by rangers during my visit to the island in July) to 5000 during the peak spring and summer evenings, when adults return to their burrows more frequently to replenish fledgling offspring. But here’s the wonderful thing - penguin sightings are virtually guaranteed. That’s a rare occurrence in the unpredictable world of nature.

Numbers have dwindled from their peak – before Europeans arrived – but they have been on an upwards trajectory ever since efforts were made to eradicate predatory foxes from the island during the 1980s. Housing was also removed from the Summerland Peninsula over a period of 25 years – a government initiative that led to fewer penguin casualties on busy roads, or from being killed by pet cats and dogs.

Today, the entire peninsula is a wildlife sanctuary and it’s likely you’ll spot wallabies and Cape Barren geese nonchalantly grazing or lazing close to the road. Endangered eastern barred bandicoots were successfully reintroduced to the island in 2017 as well, so spotting one is a rare but viable treat. I felt chuffed to see one scurry out onto the sand at Summerland Beach while I sat waiting for the penguins to wade ashore, and again later when a family of one adult and two young ones darted out from the grassy fields bordering the road during the drive back to Cowes. Of course, with so many critters running around, it should be obvious that visitors to this region should be vigilant and drive slowly. Still, it doesn’t hurt to be reminded. The rock formations at the very tip of the Summerland Peninsula are called The Nobbies. It’s here where you’ll find stunning sea cliffs, jagged outcrops, penguin burrows, nesting seabirds and the Antarctic Journey – an interactive gallery showcasing the frozen continent to the south. There’s also a boardwalk leading to a blowhole. Gaze a little further out to sea and you’ll notice an archipelago called Seal Rocks. Home to the largest colony of Australian fur seals (around 20,000) found anywhere in the world, they can be seen up close during a cruise with Wildlife Coast Cruises, which also operates whale-watching cruises during the whales’ winter migratory phase. Both cruises depart from Cowes Jetty. 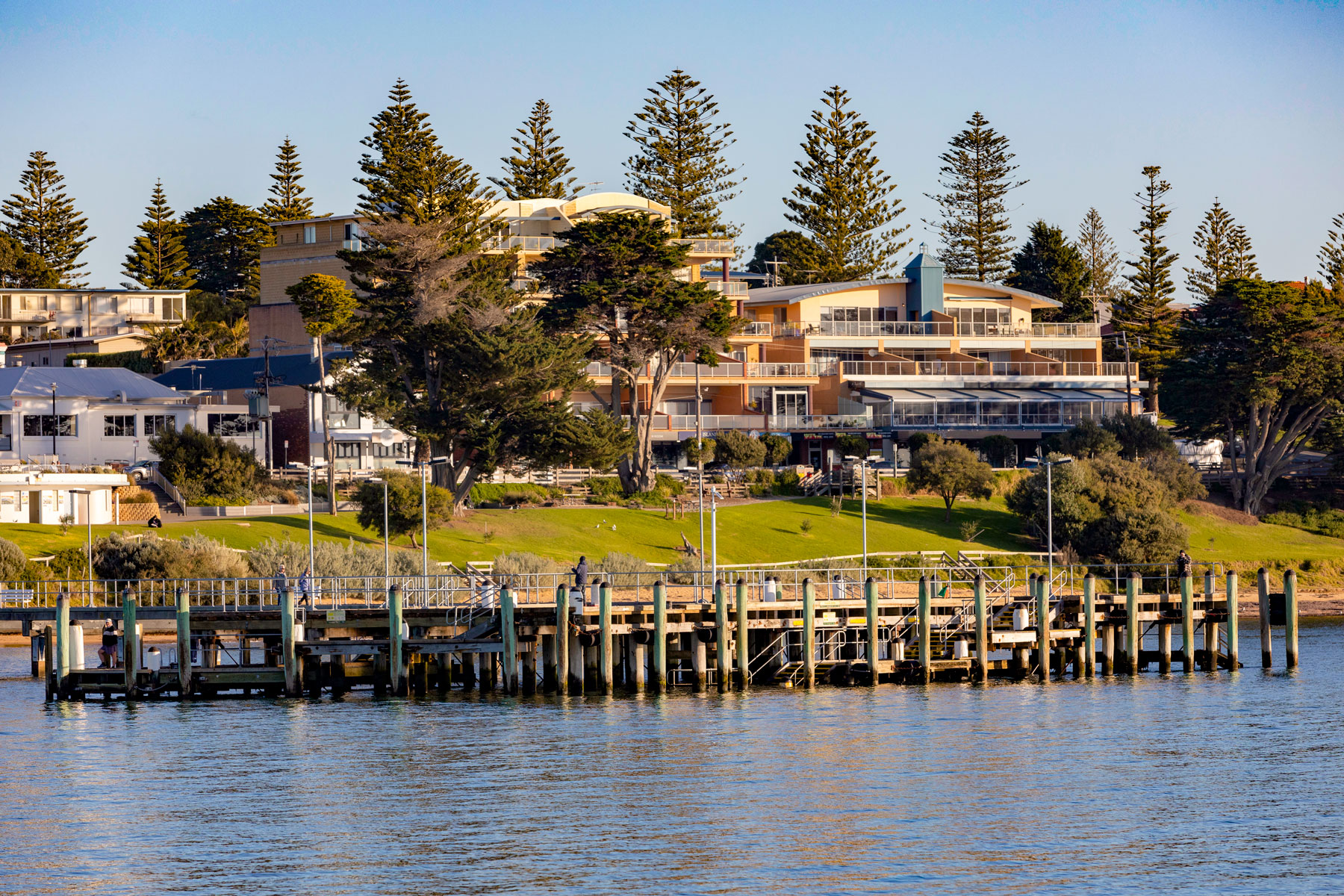 Midway between Newhaven and Cowes, the Koala Conservation Reserve has a captive breeding program with a koala population of around 40. Visitors can wander along two treetop boardwalks for superb up-close koala viewing, and spot wallabies, echidnas and parrots on walking trails through six hectares of natural bushland.

Keep an eye out for echidnas elsewhere on the island too. While driving south along an unsealed road connecting Cowes with Pyramid Rock one starry night, an echidna ambled across the road in front of me. Wallabies and possums also materialised that night on that same lonely stretch of road.

During the summer months, wading birds fly in from all parts of the world to the mangroves and wetlands around Rhyll Inlet. The importance of this region has been recognised under the Ramsar international wetlands agreement. You’ll find spoonbills, oystercatchers, herons, egrets and cormorants in abundance here, as well as numerous boardwalks. Climb the Conservation Hill Observation Tower for panoramic views. The pelican feeding that takes place at each day alongside the San Remo Jetty, just off the island, is a more interactive wildlife oddity. As many as 100 pelicans loiter outside the San Remo Co-Op, hungrily devouring filleted scraps that are fed to them from a bucket in front of an eager crowd of onlookers. While you’re there, observe the tidal rush squeezing between the headlands in and out of Western Port Bay. It’s most noticeable under the San Remo Bridge. The lay of the land

Some 70 per cent of the island’s 20,000 permanent residents live in Cowes, midway along the north coast. During summer, that population triples. Facilities in town include all the major supermarket chains, a small public hospital, two golf courses, two pubs (the historic Isle of Wight Hotel is currently undergoing redevelopment), numerous restaurants and cafés, antique stores and op shops. There are also seven caravan parks here, so you’re more than likely to be based in Cowes during any visit. Another caravan park is located in the adjoining town of Ventnor, further west, and there’s a BIG4 in Newhaven, near the San Remo Bridge. There are no caravan parks in sleepy Rhyll, nor along the rugged south coast, where pretty surf beaches are lashed by swells sweeping in from Bass Strait. Not much happens in the towns strung out along the south coast. Many of the houses here are holiday homes, though there’s a few restaurants and takeaway food outlets in Cape Woolamai, as well as the atmospheric Wooli Tavern.

Like its tourism website hints, Phillip Island is close enough to reach during a short drive from Melbourne, but far enough for you to feel like you’re on holiday. This is the beauty of a visit to the island. It takes less than two hours to get here from central Melbourne, so it’s the ideal getaway for novice caravan owners who want to test out their new purchase and the lifestyle that accompanies it. There are plenty of caravan parks to stay at. And it’s easy to get around, taking just 20 minutes to drive end to end, from east to west, or 10 minutes from north to south. There’s a good network of sealed roads cutting through an interior that’s dominated by farmland.

Fancy a short cut? The cheat’s way for a better overview of the island is during a scenic helicopter flight. My flight departs from the airport in Newhaven and we do a complete circuit of the island while pilot Chad Mozley points out some of the island’s more celebrated, as well as lesser-known, attractions. “People who have lived here for 30 years find out stuff that they’ve never known about when they come on these flights,” he says, as we fly towards Cape Woolamai, the island’s highest point and a magnet for hiking enthusiasts.

Mozley lists the tidal channels and mudflats near Rhyll as his favourite area to fly over, while we pass over other natural features like The Nobbies, Pyramid Rock and Forrest Caves. Representatives from German car manufacturer BMW are test driving new models at the Grand Prix Circuit, the venue for the Australian Motorcycle Grand Prix and home to a go-kart track that’s a smaller scale version of the main circuit. The National Vietnam Veterans Museum is next door to the helipad, while the Phillip Island Chocolate Factory is also temptingly close by. Churchill Island is a little further north. Young families like to come here to see shaggy Highland Cattle, watch sheep dogs at work and whips being cracked, and to see how blacksmiths create metal accessories using heat and blunted force. Older visitors like wandering through the 19th-century cottages on the site where European immigrants first tilled Victorian soils for agricultural purposes back in 1801. Things sure have come a long way on the island since then. Getting there: Phillip Island is 130km, or just under two hours’ drive, from Melbourne. Tolls may apply. The Phillip Island Visitor Centre is located in Newhaven, just over the San Remo Bridge from the ‘mainland’.

Where to stay: Free camping is not permitted anywhere in the Bass Coast Shire, so you’re restricted to staying in caravan parks. Fortunately, there are plenty of those, though you’ll definitely need to book ahead during peak holiday periods. Nine caravan parks on the island allow holiday bookings, plus another three just off the island in San Remo, Kilcunda and Jam Jerrup. There are no public dump points on the island.

Best time to visit: November to March, when temperatures are warmer. Come during winter though and you’ll practically have the island to yourself. It’s also when you can see whales just offshore. Just be prepared to rug up, especially anywhere along the south coast. Be warned - visitors to the penguin parade are advised to bring warm clothing any night of the year.