Chris Whitelaw — 14 July 2022
Glorious solitude and plenty of pre- and post-settlement history are the rewards for getting here.

The MacDonnell Ranges stretch more than 600km in a series of parallel ridges east and west of Alice Springs. They cover an area of 39,300sq.km and include the five tallest mountains in the Northern Territory. Explorer John McDouall Stuart named them during his 1860 expedition in honour of Sir Richard MacDonnell, the Governor of South Australia at the time.

The spectacular red quartzite formations were created about 350 million years ago, then folded and fractured by tectonic forces. Time allowed ancient rivers to carve their way through gaps and gorges on their relentless journey to floodplains in the south. In 1870, the ranges were crossed at Heavitree Gap by a party of surveyors led by William Whitfield Mills, while following the Todd River as a possible route for the Overland Telegraph Line.

Alice Springs straddles the Stuart Highway just north of the Gap, and makes an excellent base from which to explore these magnificent rangelands. While not as well known as their western counterparts, the East MacDonnells are easily accessed by the Ross Highway, which leads from the Stuart to a string of geological attractions that feature significantly in the culture of the Arrernte Aboriginal people, and provide peerless settings for bushwalking, camping and four wheel driving. These eastern rangelands are part of an arid bioregion with an average yearly rainfall of less than 300mm, which falls mostly in summer when monsoon depressions sweep down from the northwest. Seasonal temperatures vary widely from extremely hot in January to frosty in July. Both temperatures and evaporation rates are modified within protected valleys and gorges, where wetter microclimates survive around ephemeral creeks and waterholes. Surprisingly for such an arid environment, more than a thousand kinds of plants grow in the bioregion, representing 65 per cent of all species found in Central Australia - including 105 that are rare or endangered. These diverse plant communities provide habitats for a wide array of wildlife, including five native mammal species, 14 reptiles and 80 birds.

The East MacDonnell Ranges contain sacred sites and places of strong cultural significance to the Traditional Owners, the Eastern Arrernte Aboriginal people. Many sites are related to the ‘Caterpillar Dreaming’, the story of the Three Caterpillars - Yeperenye, Ntyarlke and Utnerrengatye - giant ancestral beings who created many features of the East MacDonnell landscape, then radiated out to the edge of the Simpson Desert. Local Arrernte people consider themselves direct descendants of the Utnerrengatye Caterpillar ancestor. Caterpillar installations symbolise the totem of the local Arrernte people

This small nature park protects two attractive gaps with semi-permanent waterholes in the Heavitree Range, part of the East MacDonnell Ranges. Emily Gap (Anthwerrke), 10km east of the Ross Highway’s junction with the Stuart, is a registered sacred site associated with the Caterpillar Dreaming, represented in a gallery of large rock paintings within the Gap. An ephemeral waterhole among imposing rock formations at Emily Gap

Jessie Gap (Atherrke), 20km further east, is also part of the Caterpillar storyline. Both gaps may be explored by short walks and are joined by the Yeperenye Trail, an easy 7.2km walking (or cycling) track along the edge of a ridge overlooking the Ross Highway and surrounding countryside.

Twenty kilometres east of Jessie Gap, Corroboree Rock is another site of great importance to the Eastern Arrernte people. Despite the name, it was probably not a corroboree site due to the lack of water in the area, but may have been used as a storage site for ceremonial objects. The rock itself is an impressive column of dark grey dolomite formed about 800 million years ago. A ring of low ground surrounding the rock makes it look like an obelisk. A short walk from the carpark leads to an elevated viewing area and around the base of the formation to enable its strange shape to be viewed from all directions.

Trephina Gorge is one of the most popular parks in the East MacDonnells, attracting more than 20,000 visitors each year on day trips from Alice Springs (85km to the west) or low-key camping in spectacular surroundings. It is thought that the Park was named after Tryphena Benstead, wife of William Benstead, manager of Undoolya Station in the 1870s and the first licensee of the Stuart Arms Hotel in Alice Springs.

From the turn-off on the Ross Highway, the partly-sealed access road runs 14km to the day-use facilities and camping areas inside the gorge. A rough side track to John Hayes Rockhole and camping area is recommended for high clearance vehicles only. All the roads in the park may become impassable after heavy rain. 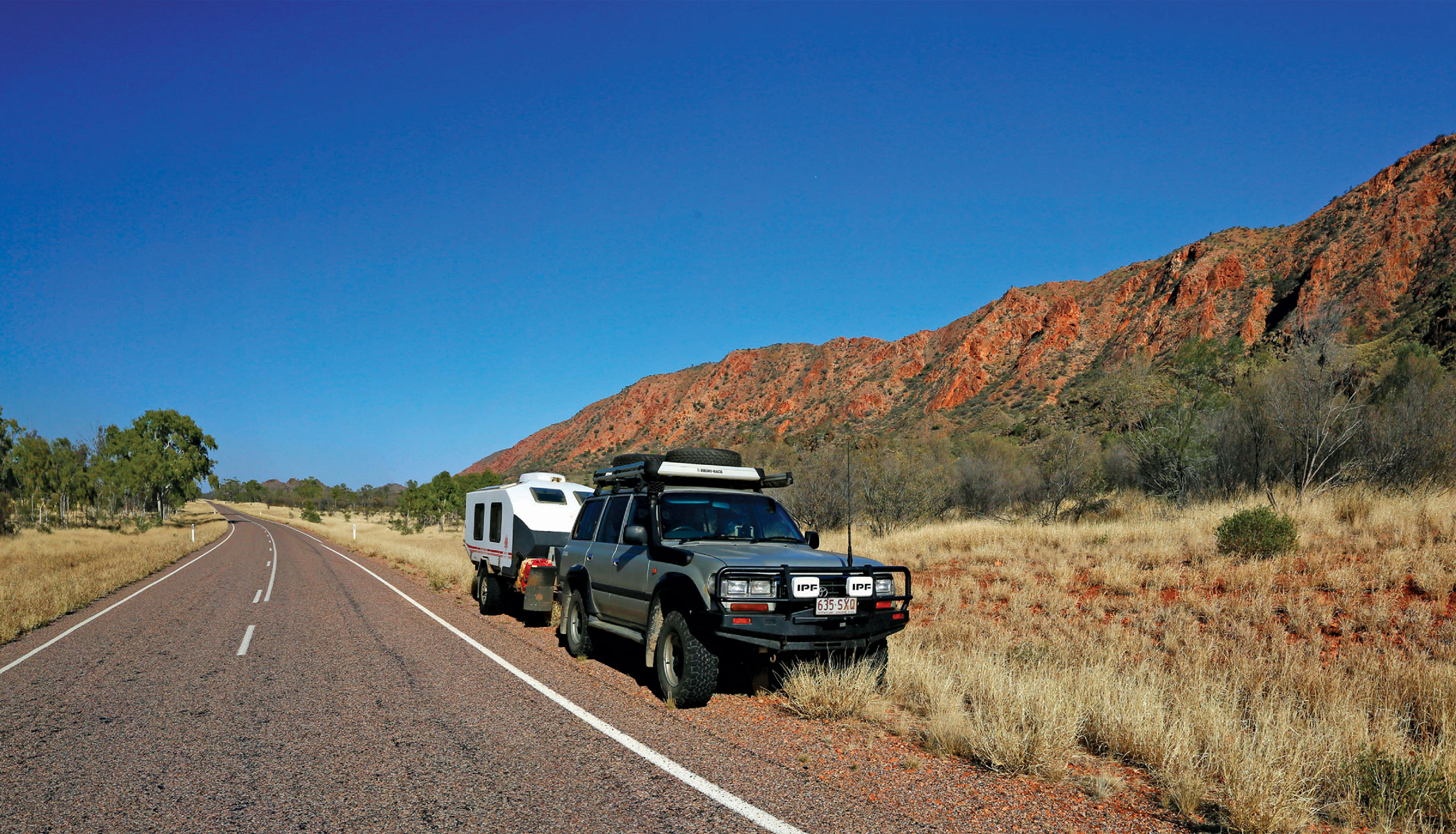 The Park is part of the cultural landscape of the Eastern Arrernte people, whose name for Trephina Gorge is Alherrkentye, meaning ‘lightning place’. Once part of Garden Station, this 1,770ha section enclosing the gorge was excised from the pastoral lease and gazetted as a nature park. In 2008, the title of this land was transferred to the Atnerrperrke Aboriginal Land Trust to be held in trust for the Traditional Owners and leased to the Northern Territory for 99 years for continued conservation under joint management.

The gorge is renowned for its sheer red-orange cliffs and watercourses lined with river red gums. Trephina Creek carves a wide, sandy swathe through the park on its way to meet the Todd River in the south. The steep, narrow walls of the smaller gorge at John Hayes Rock Hole embrace a semi-permanent waterhole that attracts much wildlife. On the park’s southern boundary stands a magnificent ghost gum believed to be over 300 years old. At 33m in height, it is the largest specimen of its kind in Australia and is listed on the National Register of Big Trees.

The Park is easily explored on several walking trails, ranging from an easy 500m stroll along the sandy creek bed to the more strenuous Ridge Top Walk (5 hours one-way) offering panoramic views of the surrounding ranges.  There are three camping areas in the main tourist hub suitable for camper trailers, caravans and motorhomes: The Bluff, Panorama and The Gorge - all with pit toilets, picnic tables, drinking water, communal firepits and gas barbecues. Bush camping is available at John Hayes Rockhole. Camping fees (cash only, no change available) are payable on site. The John Hayes Rockhole is a remote attraction near Trephina Gorge

Five kilometres after the Trephina Gorge turn-off, the highway crosses the Ross River near a junction that bends left toward the Arltunga Historical Reserve or continues straight ahead for 8km to the Ross River Resort. The resort is a modern iteration of the Loves Creek Homestead, built in 1898 by the pioneering Bloomfield family as an outstation of ‘Undoolya’ cattle station.

Covering nearly 4,000sq.km, Loves Creek was one of the earliest pastoral leases in Central Australia. Over the next century, the station changed hands many times and made the transition from cattle to horse breeding, and eventually as a tourist resort offering a unique outback experience showcasing the beautiful East MacDonnells. The Resort offers rustic bunkhouse and cabin accommodation, and a shady campground beside the river for camping and caravans ($25 unpowered, $33 powered per night), with an amenities block and laundry, gas barbecue and fire pits. Other facilities include a swimming pool, spa, bistro and bar. Basic groceries, ice, fuel and gas bottle refills are also available.

N’Dhala Gorge (Irlwentye) is an archaeological location of great cultural importance to the Eastern Arrernte people. It contains men’s sacred sites, rock shelters and a treasure trove of 6,000 individual petroglyphs (rock carvings) in designs connected with the Caterpillar Dreaming story. The petroglyphs are of two styles and are thought to have been created at different times - the first around 10,000 years ago and the second within the past 3,000 years. In addition, the gorge is noted as a refuge for rare plants such as the peach-leafed poison bush, Hayes wattle and white cypress pine.

The turn-off to N’Dhala Gorge is 500m before the Resort and follows a track for eleven km to the park entrance. The track is suitable for 4WD vehicles only and crosses the Ross River several times; it becomes impassable after heavy rain. Near the park entrance is a small bush camping area, which has toilets and picnic tables but no water. Camping fees are payable on site. From the camp, a 1.5km (1 hour return) walking track explores the gorge with signs that provide information about the petroglyphs and plants.

The 5,000ha Arltunga Historical Reserve is located on the Arltunga Road, 33km northeast of its junction with the Ross Highway.  Officially Central Australia’s first town, Arltunga was born out of a mining rush in 1887 when alluvial gold was discovered in a sandy creek bed downstream from Paddy’s Rockhole. The town that grew around the diggings supported 400 people in its heyday, but conditions were harsh – temperatures were extreme, drought played havoc with the wells and supplies had to be brought from the railhead at Oodnadatta, 650km away. The rush was short-lived but the town struggled on after 1898, when the South Australian Government built a battery and cyanide works to continue extracting and refining the gold. The battery closed in 1933 and the settlement was converted to an Aboriginal mission until that was moved in 1952. Old mining machinery on display at the Arltunga information centre

The Visitor Centre provides a great introduction to the Reserve and its mining history, through cultural and historical displays. Armed with the ‘Exploring Arltunga’ brochure and map, visitors can explore many of the well-preserved buildings on self-guided walks. During the tourist season, Rangers give guided tours of significant historic sites. While you can’t fossick in the Historical Reserve, doing so is permitted in the adjoining Fossicking Reserve with a permit available at the Visitors Centre.

Located 40km east of Arltunga, Ruby Gap is a remote park enclosing the Glen Annie Gorge section of the Hale River as it winds through rugged valleys at the far eastern end of the ranges. In March 1886, explorer David Lindsay found what he thought were rubies in the sandy river bed, sparking a mining rush that attracted up to 200 prospectors at its peak. However, the boom ended abruptly after only two years when it was found that the gems were far less valuable garnets. By then gold had been discovered at nearby Arltunga and the ruby camps emptied overnight as miners moved to seek their fortunes there instead.

With stunning scenery, the gorge is rated by some as the best in Central Australia, but it’s hard to reach and a high clearance four-wheel drive vehicle is essential.

Just past the old Arltunga Bush Hotel, a rough track runs southeast for 25km to the park entrance, where it drops into the Hale watercourse and follows it for another 10km over boulders, waterholes and patches of deep sand. A 2km walking trail through the gorge then leads to Fox’s Grave, one of the few relics of the ‘ruby’ boom in the park. This is no place for inexperienced drivers and, while offroad camper trailers may be towed here with care, it would be very difficult to get caravans (even offroad ones) through without damaging them. Heavy rain may render the tracks temporarily impassable and create bog hazards in the sandy floor of the gorge. Also, the Hale River is susceptible to flash flooding, so if it begins to rain heavily, it’s wise to leave the park immediately and head for higher ground.

Bush camping (albeit with no facilities) is permitted along the river between the entrance and Glen Annie Gorge and camping fees apply.

Having worked hard to get here, it’s worthwhile staying a few days to take advantage of the glorious solitude and opportunities for bushwalking, swimming, birdwatching and photography.