Behind the Scenes: Outback Pub Experience

Glenn Marshall — 4 March 2022
If you had the chance to experience a few of outback NSW’s most iconic hotels while seeing some spectacular scenery, would you be keen?

The planning had spilled into months, the event was delayed multiple times due to border closures and travel restrictions, but suddenly it was time. But even as the participants left their hometowns, Mother Nature decided to have a say with storm clouds brewing.

New South Wales was on Armageddon alert by over-enthusiastic fear mongers, while, one by one, outback roads began to close as rain coated the region. Some regions had over 25mm dropped on them, a top-up from what they’d enjoyed only a week or so before.

We were joined on our Outback Pub Experiences with representatives from Bushtracker with two caravans (Matt and Andy), Wonderland RV (Damien), Austrack (Nick and Sam) and our Creative Director, Tim, was towing our long-term Air OPUS OP4 camper. The legendary Cam Inniss was there to capture the video and stills, while yours truly led the trip in my trusty Prado, capturing stills and morphing into Tim’s sous chef. 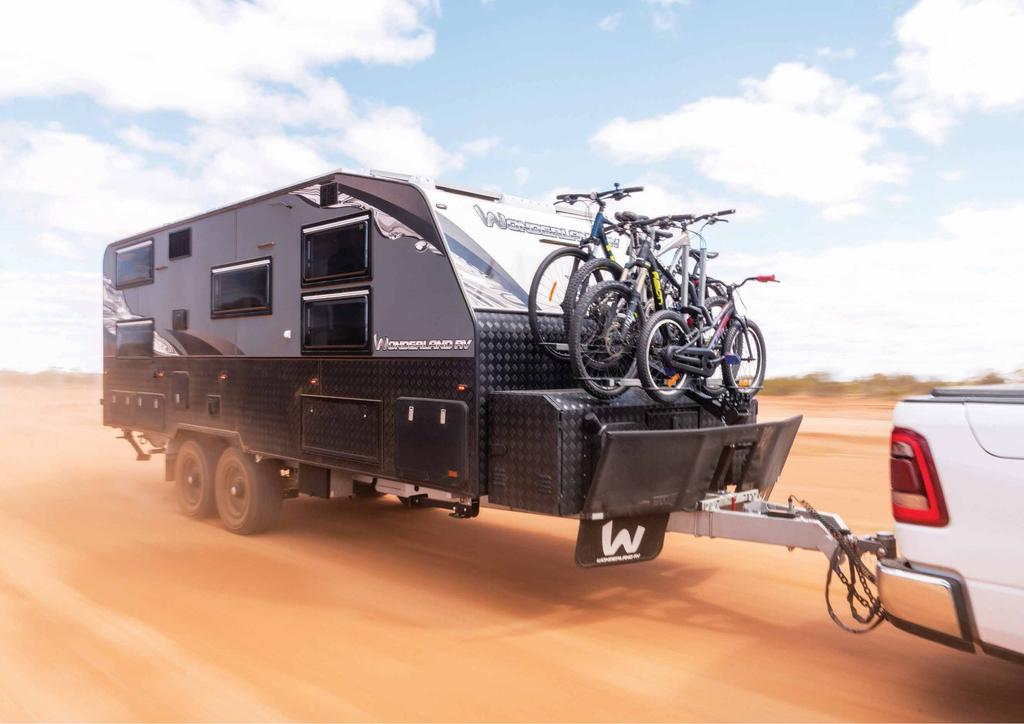 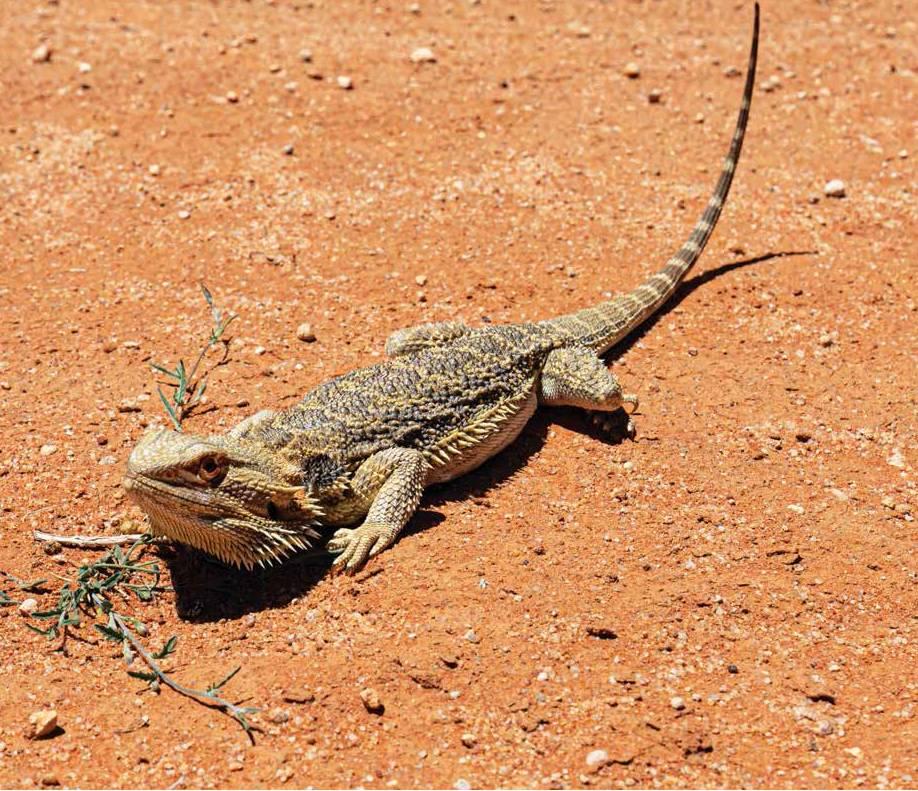 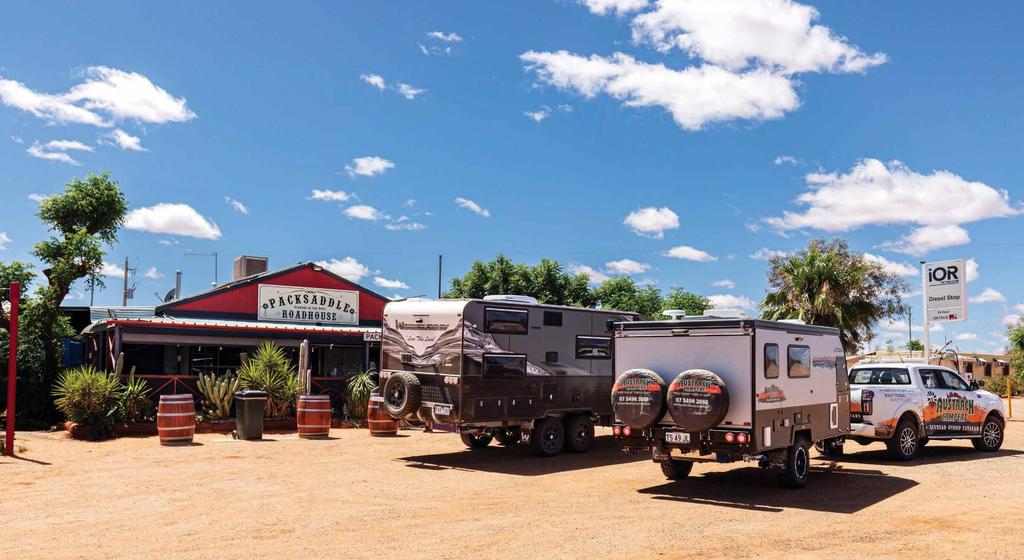 We were also testing out some gear on the trip that included a bike carrier mounted to the Wonderland from iSi Carriers, a Guzzle H2O water filtration unit from Off-Grid Adventure Co., an Ampfibian RV Plus power adapter, some Invicta lithium batteries from Sealed Performance Batteries, and the complete power systems from Enerdrive that were installed in three of the caravans.

The group gathered at Kidman’s Camp in North Bourke and after the initial introductions, Chef Tim prepared a stunning first dinner consisting of Scotch fillet steaks paired with cauliflower and cheese, crushed potatoes, blue cheese lettuce salad and a tomato, buffalo mozzarella and basil salad. There was some nervousness about whether the experience would continue with the weather forecast and closed roads, but we were keen to test out the caravans and campers — so the plan was altered slightly. The next morning, we made a dash for Broken Hill where things were a little warmer and drier.

The westerly wind was blowing a gale, but that didn’t seem to affect the towing ability and handling of the RVs. When we finally pulled into the Broken Hill Outback Resort, the group were quick to set up and prepare for our first Outback Pub Experience. The main resort building is the old Mount Gipps Hotel that began operating in the late 1800s. In 2018 the pub was refurbished, having been closed for nigh on 30 years, and is now a lively hub with a bar and bistro that serves breakfast, lunch and dinner.

It was nice to be able to sit as a group at a large redgum table and enjoy an array of beautiful fare while enjoying a beverage or two, with loads of friendly chatter. That evening we were spoilt, as Matt produced a projector and drop-down screen so that we could watch the latest Bond movie.

The crew awoke to a beautiful blue sky with a few white fluffy clouds, the sun shining brightly. The strong winds over the past couple of days had dried out a lot of the tracks, so our plan was back on track. The morning was spent capturing some video and stills of the RVs being towed down Broken Hill’s main street before heading up to the Line of Lode Miners Memorial for a look around.

After fuelling up, the convoy covered the short distance between Broken Hill and Silverton. Checking into Penrose Park Recreation and Campground lunch was sorted before the group was split into two. One group headed out to the Mundi Mundi Plains to capture some video content while the second group chilled around camp before getting the fire started. Tim was cooking a classic camp oven dinner — a leg of lamb seasoned and spiked with garlic and rosemary and a slab of beef marinated in red wine. This was matched with roasted root vegetables, a green salad and gravy, and was thoroughly enjoyed by all.

The next morning, the second group followed Tim and Cam out to Mundi Mundi while the rest of us explored Silverton. Most of the businesses were still closed, but the Silverton donkeys entertained Nick and Sam while Andy and I checked out John Dynon’s art studio. We got to have a great chat with John while viewing his unique outback paintings, prints and memorabilia. Having chatted for so long, it was time to quench the thirst and as the famous Silverton Hotel was across the road, that’s where we all headed for a couple of cold ales.

What makes the Silverton Hotel so iconic? It has been in numerous commercials, catered to actors and travellers alike, and it’s the glue that holds this small community together. Like the Birdsville Hotel, it’s bloody photogenic and everyone loves to take a photo of their rig parked in front of the pub. Sadly, the Interceptor from Mad Max 2 no longer has a home in front of the Silverton, as it was sold to a collector years ago.

It wasn’t long before we were joined by the rest of the crew and enjoyed Peter and Patsy’s hospitality and homestyle cooking for dinner. The pub is for sale if anyone is interested, but I’m not sure if the donkeys are included.

Once dinner was complete, we made our way out to the Mundi Mundi lookout for a sunset content shoot. I’m sure the onlookers thought us weird as one set up after another made their way down the road before turning around and heading back as the sun dropped below the horizon.

A very early rise saw us packed up and out at the Mundi Mundi lookout for a sunrise shoot, a repeat of last night, but this time the Mundi Mundi Plains exhibited the stunning blue hour just before the sun finally rose. Hot coffee and bacon and egg rolls were on offer from the Silverton Hotel — perfect after such an early start.

Retracing our steps back to Broken Hill, fuel tanks and jerry cans were topped up before we headed north up the Silver City Highway. It didn’t take long to reach the Packsaddle Roadhouse and I was surprised to hear the highway was now bitumen all the way to Tibooburra.

We hustled into Milparinka in time for a cracking lunch at the Albert Hotel. Steak sandwiches with the lot, minus an ingredient or two was the go and the service was excellent. Volunteers are still working hard restoring some of the buildings and surrounding streetscapes and there is a gold coin donation box at the courthouse that goes a long way in keeping the works going.

The temperature gauge rose as we ventured further north to Tibooburra and having checked into the Granites Caravan Park everyone enjoyed a refreshing shower. The crew were blown away by the huge serving sizes when we dined on the front verandah at the historic Family Hotel. Built in 1882, the hotel is famed for the murals painted by renowned Australian artists including Clifton Pugh and Russell Drysdale.

As golden hour began to descend, we took the Wonderland and Bushtracker out to the Granites Sunset Lookout for what we call ‘hero shots’. Once the colour had drained from the sky, we headed back to camp for an early night.

Rising at dawn, Tim whipped up another tasty breakfast of bacon and scrambled eggs, hamburgers, smashed avocado and English muffins. Those that needed to fuelled up, before we finally hit the dirt on our way into Sturt National Park.

This was the first time many had been out this way, so when we came across a large open, dry lakebed, it was the perfect backdrop for some content shooting (yes, we stayed on the track). Fort Grey campground was the next stop for morning tea and a chance for Cam to back up his latest video captures. Water in Lake Pinaroo prevented us from walking out to the tree blazed by explorer Sturt.

We continued along the Cameron Corner Road before turning onto Middle Road. Entering dune country as the track led us through this amazing national park. With room to park up, we enjoyed a quick lunch at Binerah Well before heading to a beautiful escarpment just past the old Olive Downs Homestead. After capturing some epic content, we jumped onto the Jump Up Loop Road that led to the Silver City Highway. Driving the dusty bypass track as the fresh bitumen cured was a bit of fun, but the Opus suffered a major blowout along the way.

Heading south we eventually turned onto the Gorge Loop Track, arriving at the Mount Wood Campground just as the TPMS system on the Wonderland Ram sounded, with a rear tyre suffering a puncture. After everyone had set up, tyre plugs were forced into the offending gash in the tread. As the sun dipped towards the horizon, we dined on pulled lamb shoulder with a Ras el Hanout rub, hummus, tahini dressing, tabouli salad, cabbage salad and pita wraps, another spectacular feast prepared by Tim.

Trilby Station was our next destination, so we followed the Tibooburra Road south before taking a hard left onto The Cut Line, a virtual straight road all the way to Wanaaring. On the way the plugged tyre failed on the Ram, so the spare was installed — thankfully it wasn’t a useless space saver! Most in the crew fuelled up before lunch was enjoyed at the Wanaaring Store, the burgers were bloody beautiful, and we were well looked after by Karen and Col.

The Ram suffered another puncture, and the tyre repair kit had another work out, with three tyre plugs inserted to stop the leak. Tentatively we continued before tackling some back roads to Trilby Station on the Darling River. The evening was spent around the fire as we enjoyed an asparagus risotto with seasoned chicken thigh and a spinach salad with balsamic reduction and toasted seeds.

The next day was spent shooting content with some time in the hot afternoon spent relaxing by the pool before a final night reminiscing while feasting on a sharing platter of food from what was remaining in everyone’s fridges.

On the final morning, we completed content shooting before the Wonderland and Austrack departed, the Bushtrackers having left at dawn. The Isuzu D-Max containing Tim and Cam and towing the OPUS, followed me as we headed towards Cobar. We stopped at a muddy watercourse to capture some gear content before continuing to Cobar for lunch. From here we went our separate ways, me ending up at Narrandera and Tim and Cam at Griffith.

This was the first OPE, but it certainly won’t be the last. It was a pleasure to have experienced this epic adventure and share it with great company, capturing great content, eating great food, enjoying great hospitality, finding great scenery, with great driving, in this part of our great country. I’m looking forward to the next one.