Cathy Anderson — 16 December 2021
The interest in native foods, from emu to kakadu plums, is booming across Australia. But what are Indigenous foods and how can you sample them?

Long before Europeans settled in Australia and brought their imported crops and stock animals with them, Indigenous people had been living off the plants and animals that are endemic here.

While the colonists relied on some native foods early on for survival, these were widely ignored once they were able to grow plentiful supplies of their favoured fare. But fast forward to modern-day Australia, and native foods are enjoying a renaissance.

Their rise in popularity is linked to a greater appreciation from foodies, a burgeoning supplier market and, in part, attributed to reality TV cooking shows that use native ingredients for an ironically ‘exotic’ flair. All these factors are shining an increasingly bright spotlight on the industry and attracting greater focus from consumers. 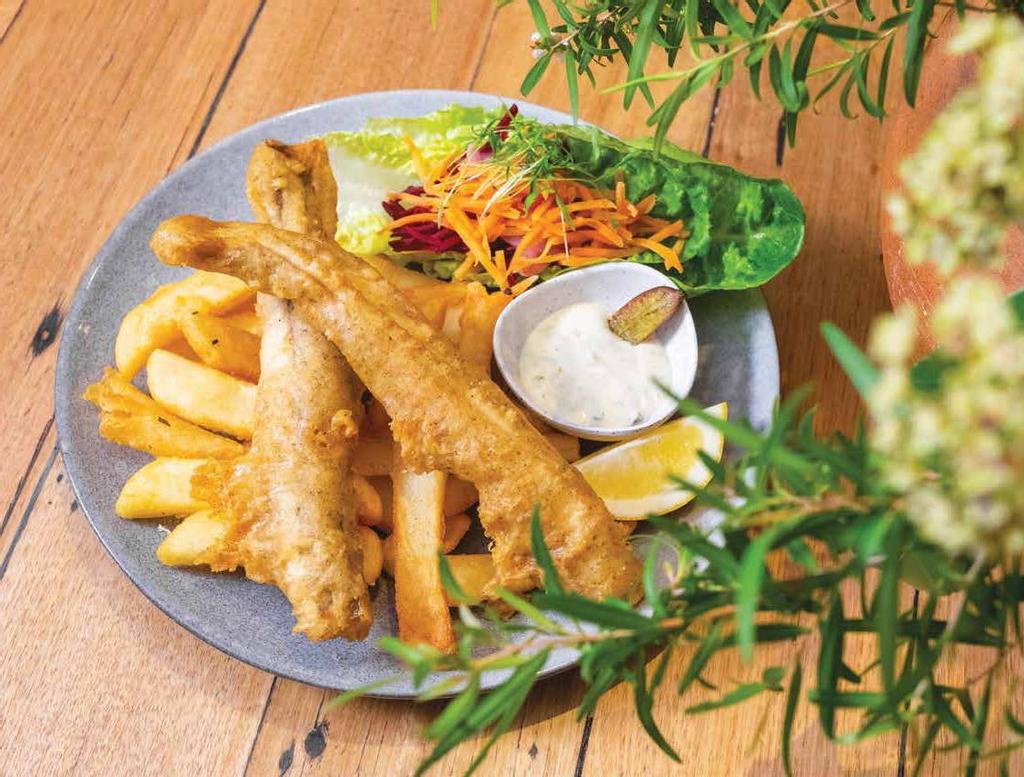 While it is growing, the native bush foods industry is a cottage one. This means that finding the ingredients is not always as easy as popping down to the supermarket. Many Indigenous-owned firms are also taking great pains to educate Australians of all backgrounds about the connection First Nations people have to Country, their relationship with food and to spark broader conversations about our nation’s Indigenous culture.

Here, we chat with Australian farmers, producers and chefs who are making a living through native foods, and in turn, helping to make the industry thrive.

While hosting a dinner with family and friends one weekend, Queensland farmer and proud Bundjalung man, Doug Goebel, made a salt mix for barbecued meat using various native spices that he had grown up eating. A family member asked what it was, and when Doug told them, they replied, "That's amazing! Why aren't you commercialising this?"

The rest, as they say in the movies, is history. Doug and his wife, Tracey, had purchased a 40-acre farm in Ropely, just east of Toowoomba in south-east Queensland and, after being hit hard by the drought, swapped their cattle grazing venture for native foods farming. Their company, Native Oz Bushfoods, grows 40 different varieties of edible native bushfoods, including desert quandongs, old man saltbush, small-leaf tamarind and wattle. They sell a variety of products online and at local markets, including Kakadu plum jam, tamarind leaf jam, Davidson plum relish and trademark Bush Blend Salt and Lemon Pepper Salt Blend.

“Our block's a dry block, so we've got no water here at all, only the tanks. So we tried to think of a different angle to utilise our ground,” he explains. “I always like to play around and go out and harvest a little bit of native bush foods to use ourselves, especially the desert quandong, so we thought, ‘Well, why don't we try and bio-diversify?’”

The pair don’t grow all ingredients onsite, instead sourcing native foods from other parts of the country where they grow naturally. Goebel says they are a “big supporter” of Indigenous communities and businesses.

“So our Kakadu plum, we buy that from up in Arnhem Land off an Indigenous community,” says Goebel. “Our Davidson plums, we get that from a little rainforest area called Maleny, just north of Brisbane. And we source our desert tomatoes Australia-wide.”

Goebel also partakes in what’s called ‘wild harvesting’, where he and family members head to remote areas and pluck foods from the bush. He says this is a practice that has deep traditions, but also ethics.

“As an Aboriginal man, we’ve still got our own laws that we've got to watch as well. So, I can only harvest so much of the tree and I leave a percentage of the tree there for the animals,” he explains.

The couple is seeing a huge uptick in interest for native ingredients, but also for the plants themselves. Soon they hope to open a ‘touch and taste’ garden on their property to introduce visitors to bush foods as well as a nursery where people can buy plants to grow at home.

Sullivan says the inspiration for Wardnu came from discussions about the knowledge of our elders. She has a side business called Granny Skills, which brings communities of women from multicultural Australia together to share skills, culture and traditions in an effort to safeguard them. When Coulthard’s Pop was diagnosed with dementia, they realised his Indigenous traditions needed to be saved.

“Damien realised very quickly that a lot of those stories from his Pop were going to be lost, and we both started talking about how we were two cultures that cared about exactly the same thing,” she says. “And we decided to set up Warndu because I worked in food and we loved these beautiful, native Australian ingredients. I figured, how could we talk about local food if we're missing the truly local food?”

Sullivan says the demand for native foods is outstripping supply, as people are becoming more aware of them. The team has created a cookbook to inspire amateur chefs to play with bush foods.

“The book helps people cook what they would normally cook, but we've taught people how to substitute a ‘normal’ ingredient, a supermarket ingredient, with a native ingredient,” she says. “We've made that really easy for people.”

Coulthard conducts educational sessions to help spread the word about bush foods and Indigenous culture, which Sullivan says is a prime focus of the business.

“We're still all novices in this space, in this native food space,” she says. “The only experts are the Indigenous elders, not us. We're never going to be masters of this by any means, not in our lifetime. We're creating a legacy brand for future generations.”

Native foods aren’t just for the frying pan, slow cooker or the oven — they are also being used as tasty ingredients in craft beer. Or, in this case, non-alcoholic beer.

Sobah is a craft brewer established by proud Gamilaroi man, Clinton Schultz and his wife Lozen, on Queensland’s Gold Coast. After he stopped drinking seven years ago, Schultz tinkered with creating his own non-alcoholic brew using skills gleaned from making ginger beer with his grandfather, and his expertise as a chef in his early working days.

Sobah is available in more than 900 outlets nationally, and the company just raised $1 million through crowdfunding to build a brewhouse in Burleigh Heads.

His beers are all infused with the flavours of native bush foods, including the Sobah Pepperberry IPA, Lemon Pilsner, Boab and Wild Ginger Lager and Wattleseed Gold.

“We try to match particular natives to the styles of beers that we're brewing,” Schultz explains. “Then we try to source those natives from the areas that they come from.

“For instance, we get all our lemon aspen and our Davidson plums from far north Queensland where they naturally grow, and then we use pepperberry which we source from down in Tasmania and Victoria. I even use boab wild sourced over areas around Broome. We literally use natives from every corner of the country.”

He’s teaching his three sons about native bush foods, too. At certain times of the year the succulent known as ‘pig face’ sprouts purple flowers and a fruit similar to a lychee, which the family will pick and eat while out for a walk.

“We generally got a whole bunch of people walking along, just staring at us like, ‘Oh my God, what are they doing?’ because they don't see it as a fruit and as a food source,” he says. “I've been eating and cooking with native foods for the majority of my life. They're just normal foods for me — it's not something that is exotic or new.”

When it comes to native foods to accompany his brews, Shultz says you really can’t go past emu and crocodile, and thinks there should be a shift in the way Australians think about how we farm our meats.

“In terms of proteins, I think emu is my favourite meat and it's one of the healthiest meats actually on this planet because it's extremely high in iron and very, very low fat content,” he says. “We could do a lot for this country by returning to consuming some of the proteins that are native and natural to these lands, rather than a lot of the introduced species that we've bought here that have done so much damage. Things like kangaroo, emu, farm quite well and are sustainable meat sources.”

Many cafes and chefs across Australia have been in on the secret about native foods for some time, and are valued outlets for Indigenous suppliers.

Jude Mayall, otherwise known as the Outback Chef, runs Wild Food Farm on Victoria’s Phillip Island that has a plantation for native plants as well as a cafe offering a range of meals infused with bush ingredients. Her menu offers items such as wattleseed scones, pepperberry beef pies and tempura barramundi with lemon myrtle batter and finger lime aioli in which to dunk your potato wedges.

She also sells a range of teas, spice mixes, preserves and bush fruit and nuts.

She says it’s important to revere bush foods just as much as we do the culinary flavours that immigrants have brought with them over generations in Australia. Native plants have thrived here for hundreds of years, no matter what conditions are thrown at them.

“Native plants have been growing naturally in this country — they can just survive,” she says. “And I think really it's so about honouring this country that we live in, to actually eat the food that it provides for us. And I think the more we eat of that, the healthier we become.”

Mayall works with varied growers and wild harvesters across the country to supply her with ingredients, and she also has some plants at Wild Food Farm.

Mayall says it is very easy to incorporate native foods within recipes we might already regularly use, and there are some ingredients that can easily be replaced.

“The flavours of the bush work really well with so many of those dishes without any problems whatsoever,” she says. “Lemon myrtle is the queen of bush foods. It's got a very robust, strong, punchy lemon flavor and aroma, and we use it a lot in our cooking and it can go anywhere lemon can go.”

So, how can you do that? As a first step, see the businesses affiliated with Supply Nation, an industry body with a large database of verified Indigenous firms.

Want to try to incorporate native bush foods into your campsite cooking? Try this recipe courtesy of Jude Mayall from Outback Chef.

Mix the first five ingredients together into a bowl. Add the rest and mix together, or if you feel a bit 'arty', arrange the red onion, oranges, tomatoes and olives on a plate. Pour the juice, oil and spices over the ingredients and top with coriander. Refrigerate until serving time.