I chatted to my dad as we cruised around Western Australia’s Fitzgerald Biosphere Coast. With slight irony, I couldn’t help but think of the old saying that teaches us to slow down and appreciate the beauty of life. It was particularly apt for this part of the world that is in a constant state of bloom.

WA’s southern coastal area is a visual treat. The far-flung region includes towns Hopetoun, Ravensthorpe, Munglinup, and the botanical hotspot that is Fitzgerald River National Park. Taking advantage of its UNESCO status as a Biosphere Reserve, it has altered its name change to reflect its claim to fame as one of the world’s most botanically diverse hotspots, home to over 1800 unique flora species. And things in the region only get more vibrant come springtime when the wildflowers showcase their colours to dazzle and delight.

Although it may be some effort to get to the southern edge of the state — some 500km south-east of Perth — it’s well-worth the journey to see the region’s wilderness, lofty mountains, and pristine coastline. 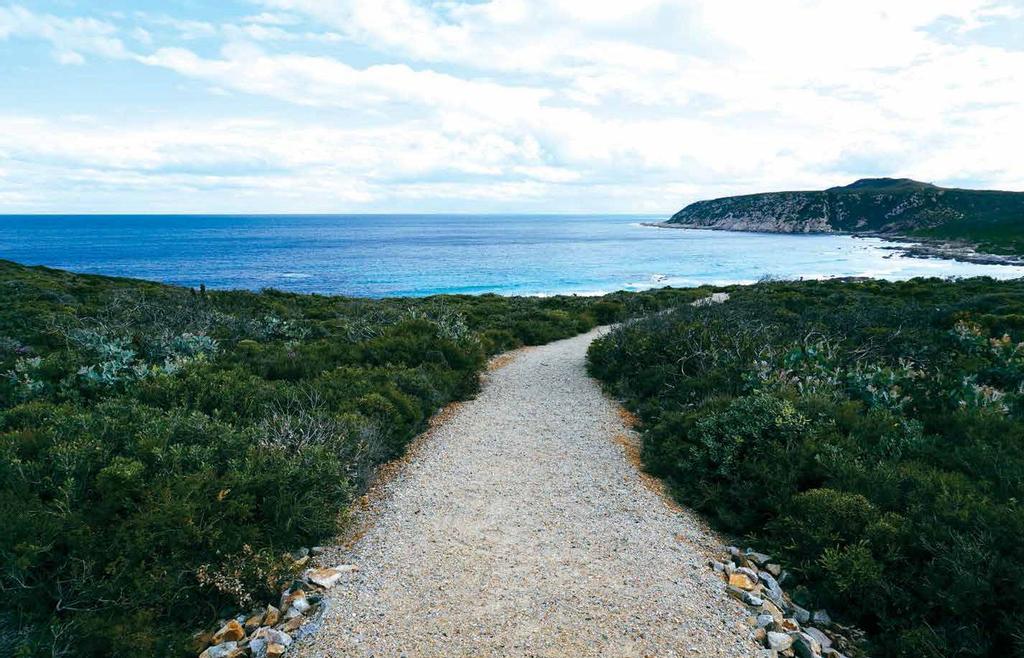 Our journey kicked off in Ravensthorpe, 510km south-east of Perth or 187km west of Esperance. We hadn’t even arrived and the scenery was already striking, with green farmlands morphing into yellow seas with canola fields in bloom.

“It’s like nature has gone rogue with a fluoro yellow highlighter,” I said to my dad as we admired the countryside’s intermittent Olympic green and gold patchwork.

With the south-west experiencing heavy rainfall over the last few months, it had resulted in a precocious rainbow on earth — and that was only the beginning of these technicolour landscapes.

We soon arrived at the ‘eucalyptus epicentre of the universe,’ the Shire of Ravensthorpe, home to 100 species and roughly 50 hybrids.

To describe Ravensthorpe is like playing a round of the categories-based word game Scattergories, as rocky ranges, river valleys, rare flora and fauna species characterise this colourful mining district. Continuing with the ‘R’ theme, it has also become a remote art gallery that many make the special trip to exhibit in recent years.

Canola Fields spread as far as the eye can see

There was no better chaperone than horticultural expert and passionate local, Sue Leighton, to show off Ravensthorpe’s natural beauty. Mind you, our self-drive tour around the region got off to a rocky start — not that it was a bad thing.

We hit the gravel road to head to the Ravensthorpe Ranges, just a ten-minute drive north of town. Encompassing 40km of low hills, it is a thrilling scenic drive to see the region from dizzying heights and endemic plant species.

“I always love coming up here, it always changes,” Sue told my father and I as she explained how even weeks out from her last visit, the slight seasonal change had altered things greatly.

The trip up was full of bumps, twists, and turns as we drove along the ranges to see some truly epic views of the countryside from Archer Drive Lookout, including more fluoro patchwork. I simply couldn't get enough of this high-vis spectacle.

If there was one thing an eagle-eyed Sue had made me more aware of, it was the small things. We pulled aside multiple times to check out some striking wildflowers, some of which were so small you would easily miss them. Seeing the fire-engine red and green beaufortia orbifolia — commonly known as Ravensthorpe bottle bush — appeared like Christmas baubles on a tree. Without Sue alerting us to these tiny pops of colour, would we have noticed? Possibly not, as our eyes were focused on the steep road ahead.

We dialled the fun factor up with continuing along the Range Top Drive Trail. Four-wheel drive vehicles are required to access this part of the trail. It’s not for the faint of heart — the ascent is reminiscent of a rollercoaster ride with the world below on both sides — but gosh, it was exhilarating.

You must admire good country humour too, as the trail’s T-junction is marked with a railway crossing sign — as if any train was ever going to cross here with the signage adjacent to a sloping forest. Of course, I appreciated the off-kilter photo opportunity.

Speaking of country quirks, Ravensthorpe’s grassroots’ ‘Farm Gate Art Trail' demonstrates the creativity and resourcefulness of its handy residents. Thirty-plus wildflower-themed sculptures are dotted 250km across the region, cleverly crafted from discarded farm metals. From blue and white ‘A Country High Tea’ Alice in Wonderland-inspired teapots surrounded by Barbie-pink everlastings, to a playfully decked out 1938 Fargo truck ‘Queen Beatrice’ — aptly named for her discovery in the trees of bees — no artwork is out of place on the trail. There’s even a not-so-small ‘Incy Spider’ with an old cement mixer for its body and an old hills hoist as the web. Brilliant!

“That’s not a field bin, it’s a watering can!” designer and constructor Colin Hughes had said of his giant installation, ‘The Watering Can’, featuring a satellite as a spout and a field bin (small silo) as its jug. All goes to show Ravensthorpe is filled with eye-popping scenery.

Feel the isolation of the Ravensthorpe Ranges

WA’S NOT SO SECRET GARDEN

The sleepy hamlet covers a lot of coast, with its seemingly endless unspoilt beaches stretching 200km. It’s a peaceful beachside destination, and the suburbia-feel town features a short but sweet shopping strip and plenty of free 48-hour RV spots. You don’t need to spend too much time here as all the adventure is just moments away, notablyin the form of Fitzgerald River National Park.

You would be forgiven for wanting to spend more time in this wild wonderland — it’s big, bold, and lush. Stretching to just under 330,000 hectares, Fitzgerald River National Park is one of Australia’s largest national parks, but its biggest claim to fame lies in its unique ecolo›y.

Home to roughly 20 per cent of the state’s plant species, 1800 flowering plant species have been catalogued, and this number is still growing — pun intended. It is what makes it one of the most significant botanically diverse hotspots in the world and thus claiming UNESCO status as a Biosphere Reserve.

Entering Fitzgerald River National Park felt like seeing the aftermath of a piñata dropping its natural confetti all over — bright colours dotted its green-dominant lands and it all appeared like a wild fiesta. This was nowhere more apparent than our first stop at Barren’s Lookout.

“The geolo›y and minerals in the rock determine the plant growth,” Sue said as we admired bursts of purples, oranges, whites, reds, pinks flashing before us left, right and centre and under the grand shadow of quartzite peak, East Mount Barren (450m).

At first glance, the area looked like proper manicured gardens, it was so neat and charming, with rocks acting as natural barriers. We eagerly followed Sue around nature’s landscaped gardens as she rattled off the names of the colourful plants in sight. Pimelia physodes (Qualup bell), Calothamnus pinifolius (Dense claw flower), Daviesia pachyphylla, Agonis, Regelia velluntina (Barrens bottlebrush), to name a few.

Watching Sue coo over the flowers was like observing a kid in a candy store. She was just so giddy to see nature thriving.

“One, two, three…” Sue was holding out her arms, counting the species she could name within arm’s length. “Nine!”

It was such a joy to watch Sue excited with nature’s confectionary — it is her thing, after all. Sue is the coordinator of the annual Ravensthorpe Wildflower Show and Spring Festival, the biggest of its kind in the world. Since 1982, the show celebrates the floral diversity of the region, displaying over 2000 wildflower varieties every September.

Back on the road again, our journey along the Park’s winding roads was met with natural forks in the road.

“They (the royal hakeas) stand like sentinels protecting the park,” Sue told us.

Standing tall and alighting the fringes of the road, their three-finger bursts of deep orange, yellows and green made me think of them as nature's traffic lights, as if marshalling us to go ahead and keep exploring.

Following nature’s lead, we soon headed to the coast and had a brief stint on the Haekea trail, a 23km walk traversing the Park’s unusual flora and rugged coastal scenery. Keyword: rugged.

Grey and rusted rocks jutted out like shards of glass along the shore. A towering rock with circular cut outs was somewhat reminiscent of the tourist photo stand-in boards or ocean’s eyes. Weathering really had its way with this rock as it looked like it had a can-opener attached to it — such amazing formations.

Now paying more attention to detail, I noticed the rocks shimmering with their natural glitters, and when the sun eventually emerged from the clouds, they sparkled even more so.

You can easily lose yourself and spend days in this park, and conveniently, you are allowed. The Park has plenty of camping spots to choose from. Hamersley Inlet was a standout, located in a winding valley of the coastal headlands and ranges. It reminded me of British Columbia, Canada, for a split second with its tranquil waters and peaks in the distance. True pristine wilderness. Now imagine waking up to a natural bouquet each day!

We ended the day at scenic pitstop, Cave Point. Its birds-eye platform over sheer cliffs provided a thrill. And as incredible it was to hear the ocean roared below and see waves relentlessly pounding the cliffs, I couldn’t take in the view for too long — the height factor got to me.

What a spot to have a moment of reflection looking out towards the Southern Ocean and so I did! It's a spot to smell both the wildflowers and the fresh ocean air, and sure is a real bliss out.

The Traditional Owners of the Fitzgerald Coast and National Park are the Wagyl Kaip and Southern Noonger People, which includes the Ganeang, Goreng and Minang People. We acknowledge Elders past, present and emerging.