It's All in the Layout

Malcolm Street — 2 September 2021
A caravan layout can make or break a van for buyers. While there are some common ones, there are others that stand out from the crowd.

There are a number of reasons why buyers choose a particular caravan or motorhome. Cost, towing weight, and offroad ability are all considerations but, for the majority of customers, the layout is a prime factor.

Occasionally I get asked a question about what the best layout is. Whilst I have seen a few layouts that have left people wondering what the manufacturer was thinking, these are the minority. There are a number of well-designed and practical ones — it’s really what suits the users best, given the practicalities mentioned above.

What layouts are available depends to some extent on the size of the manufacturer. For instance, large volume manufacturers like Jayco, Avan and New Age have any number of van lengths and layouts in all kinds of styles. However, smaller manufacturers will have a more limited range, though in some cases, can produce more selective layouts that are not available anywhere else. 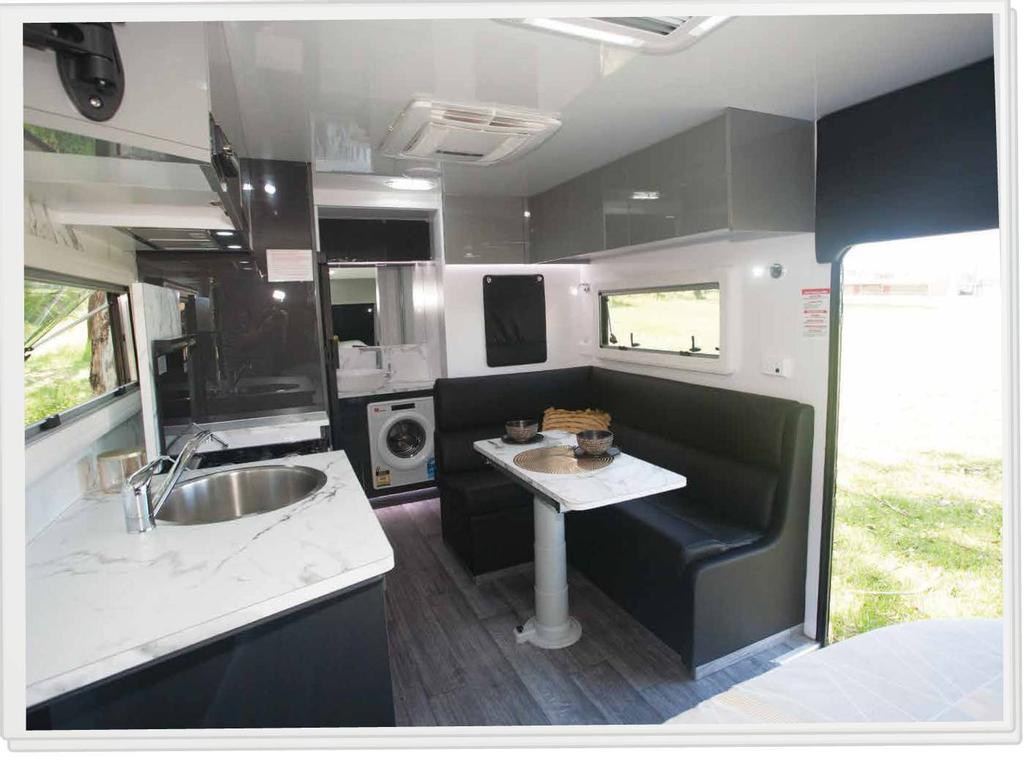 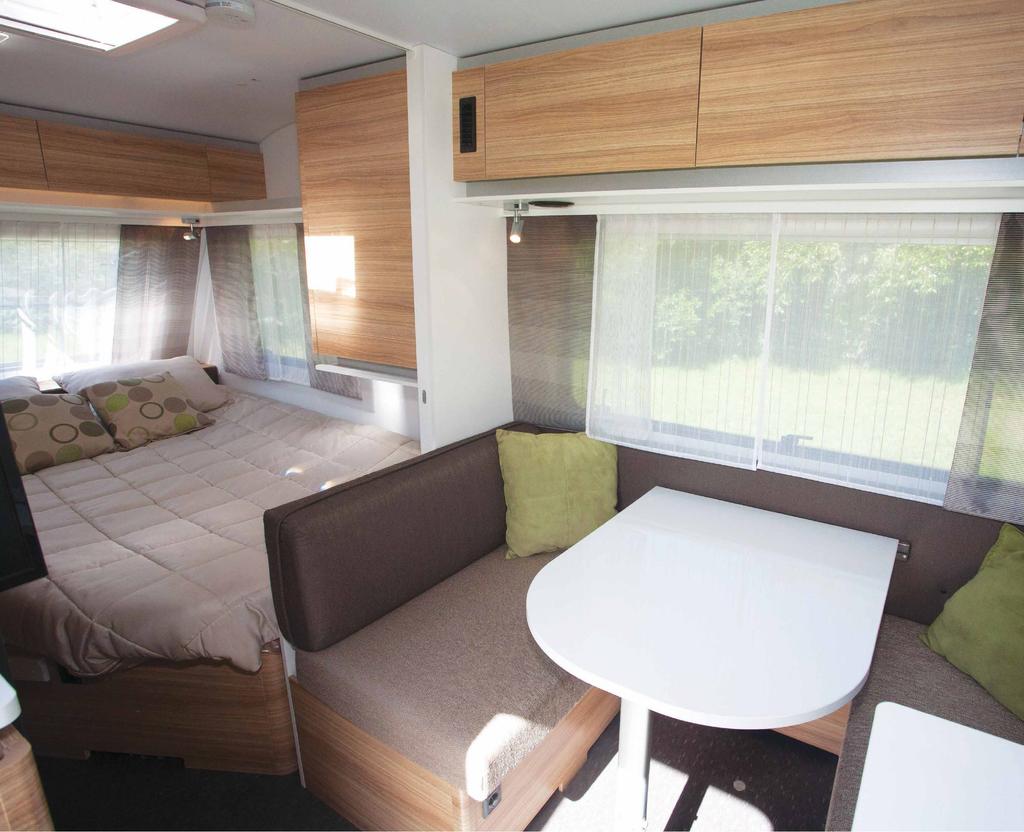 Many travellers opt for a full caravan with solid walls — but that’s not all that’s available. Pop-tops retain a good following, and several manufacturers produce vans with extendable ends — a really great idea for families where budget and towing lengths are limiting factors. It’s possible to have a six-berth van that has an external body length of just 6m (20ft).

Going back to the 1970s and early ‘80s, caravanning was a family activity and the majority of caravans built during that time demonstrated this, but over the last couple of decades there has been a big shift to layouts that are designed for couples. Consequently, a double bed — preferably island-style — is often the feature around which the rest of the layout is designed.

Ensuites/bathrooms are an item that has noticeably shifted from a nice-to-have item to almost an essential one. That said, manufacturers like Jayco and Avan both produce smaller vans without a bathroom and they suit both those who have budget considerations and/or are happy staying in caravan parks.

Bathrooms generally take up a fair bit of interior space and are dependent on overall length. All usually have a shower cubicle and cassette toilet at a minimum, however smaller rigs often have a combo unit with shower and toilet in the one unit — otherwise known as a wet bathroom. In larger vans, the bathroom can be a full width unit across the rear of the van or else a split arrangement with shower and toilet having separate cubicles.

Like any design feature, the layout depends very much on the dimensions of a caravan. Whilst the width is set at a maximum of 2.5m (8ft 2.5in), the length can generally be anything from 3.65m–7m (12ft–23ft) and it’s surprising just how much difference 300mm makes to an interior — one of the reasons why extendable ends and slide-outs have carved out a place in the market.

Weight plays an important part in any van design, which is why the kitchen facilities are often above or really close to the axle(s) and caravans with front or rear kitchens are more unusual — although like the Jayco Silverline, they are available — as the kitchen has relatively heavy items like the fridge, cooktop/stove, and microwave oven.

Other items too, like batteries, carry weight, especially when there’s more than one. Consequently, the optimal position is low down and preferably towards the van axles. In recent times in vans with high-capacity lithium (LiFePO4) batteries have them located between the chassis rails.

It might not be obvious on a quick tour of a sales yard, but there are a quite number of different layouts available. That said, currently one of the most common layouts around has an island bed at the front of the van and a full width bathroom at the rear. The bed area and bathroom tend to be fixed points, and the position, size and style of the kitchen and dinette depend somewhat on the length of the caravan body. For instance, a 5.33m (17ft 6in) Millard MFlow single axle van has a small kitchen and an L-shaped dinette just for two people, where an Eden Trackvan with an external length of 6.75m (22ft) is fitted out with a decently sized kitchen and spacious cafe-style dinette.

Something else that goes into the mix is the location of the entry door. Most front bed/rear bathroom layouts have a rear door entry, but because it’s more space efficient to have a mid-wall door (i.e. in front of the wheels), smaller vans by necessity have that particular feature.

A variation of the above is a Crusader Musketeer Athos 6.45m (21ft) caravan which has a mid-door entry with an island bed and full width bathroom, except that it’s reversed — the bathroom is across the front of the van and the bed is in the rear.

A layout that’s popular but does require a longer van body is one that has an island bed and a club lounge at the rear — a good example is the Royal Flair’s Designer Series 7m (23ft). Characteristics of this layout are usually a split bathroom next to the bedroom area, which neatly divides the living/bedroom area and a larger than usual kitchen. Of course, the club lounge is the feature item and sometimes has windows all round, New Zealand style.

East-west beds aren’t as popular as island beds but they are space savers, especially in something like the Great Aussie Vans Tribal Navigator, a 5.5m (18ft) family van complete with bunk beds and a separate bathroom. Turning the bed sideways and thus reducing walkway area at the same time does save a surprising amount of space, especially if a mid-wall door is thrown into the mix.

Speaking of bunk vans, there has been a rise in the number of family layouts that are available. In the larger vans, the most common arrangement is for an island bed up front, with kitchen and dining facilities in the middle, and bunks and bathroom in the rear, the bunks being on one side of the van and the bathroom on the other side. A good example of this is this Franklin Razor with triple bunks. Note that double or triple bunks are fairly easy alternatives, the difference being that the under-bed storage of the lower bunk usually disappears with triple bunks. Jayco Silverline slide out doesn't have a mid-kitchen

An interesting alternative to this set up is seen in an Ocean Breeze 5.63m (18ft 6in) van that, in addition to an east-west front bed and sideways facing dinette, has bunks across the rear wall and a split bathroom.

One of the ways to effectively increase the interior space of any caravan is to fit a slide-out. Sometimes used for just an east-west bed, a slide-out can also be used for both the bed and a sideways lounge, in the case of the 6.7m (22ft) Jayco Silverline, or for just a club lounge in the River Dreamliner 6.5m (21ft 6in) van. Whilst slide-outs might seem like a solution to a lack of space problem, they do add both weight and electrical/mechanical complexity to any van design.

SOMETHING A LITTLE DIFFERENT

Naturally, there are quite unique designs and Royal Flair’s Piazza is one of them for a couple of reasons in the case of the 6.25m (20ft 6in) model. First up, there’s the folding front deck that sits on the drawbar — an eye catcher in any caravan park. Secondly, there’s an electrically driven drop-down bed — not totally unusual, but mostly used in an east-west configuration. What’s different about this van is that the bed is built in a special frame and set north-south, so there’s easy access from both sides. It’s a great space saver since there’s dinette seating underneath.

Most caravan layouts come with either a cafe dinette, an L-shaped lounge or a club lounge of some description. That’s not hard and fast though — there are alternatives like the Summer Life Explorer 5.8 with two individual swivelling armchairs, which are very comfortable to say the least. In case you are wondering, there’s a small table available for dining!

European caravans are rare in Australia, but designs like the Adria Altea 402PH have stayed the course and won friends. Not a design for those who just like room to move but more for those who appreciate effective use of the space, the 4.77m (15ft 8in) is packed with features, including the French (corner) bed, kitchen, bathroom and dinette. The Europeans are the masters of efficiently using space.

Not all that common but certainly available from several manufacturers, are rear wall door caravans. Like the mid wall door, one located on the rear wall is something of a space saver and very compact in its design with a kitchen, dinette and single beds. The latter item isn’t always popular with couples, but they are very practical in more confined spaces, especially when they double as lounges.

Generally speaking, caravans mostly aren’t designed for wheelchairs or to be mobility friendly. However, there are manufacturers like Evolution Caravans that do just that with features like wider than usual doors and walkways, ceiling hoists, wheelchair friendly bathrooms and built-in wheelchair ramps. Most of these vans are custom-built for the exact needs of the customer.

The above is a short list of the variety of layouts currently available in caravans in Australia. In any design there are always going to be compromises (including money), particularly in smaller units. Consequently, when looking at any caravan layout, it’s always good to decide what’s most important — be it big kitchen, island bed, or large bathroom, and work from there. Spend a bit of time looking around because there really is something for everyone.