John Ford — 3 December 2020
2020 was a fiasco for shows, but Editor-at-Large John Ford managed to check out a recent one that went ahead — the Brisbane Caravan Show.

Despite lukewarm promotion that admitted the 2020 Brisbane show wasn't the full-on Supershow of the past, it was deemed a huge success. Queenslanders, stirred by the prospect of national isolation for the foreseeable future, flocked to the grounds, bringing their money with them.

Hosting a caravan show was such a novelty even the State Premier turned up on Friday, but with an election looming the next day, perhaps she too was looking for an escape vehicle.

Except for a few key players, most significant builders were represented, which was a marvel given the lack of fresh stock from Victoria, where, until recently, factories have been closed for months. 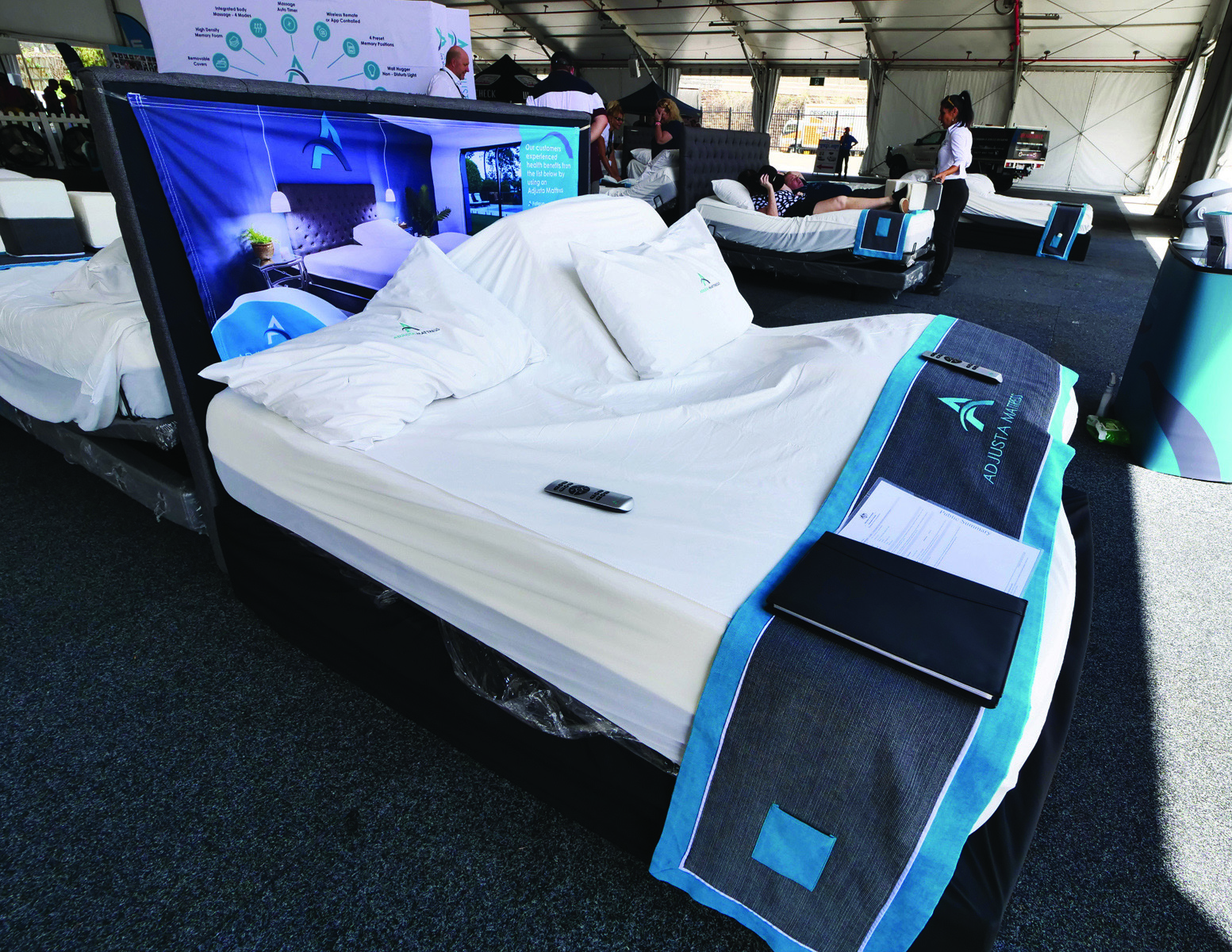 Held at the Brisbane Showgrounds over two venues, both of which were undercover, there was plenty to tempt would-be buyers. By the end of the first day, early attendees proved there was a budget and appetite for new RVs, with steady sales reported from many brands.

Parking was at a premium and very expensive, so I should have taken organisers advice and caught a free train. Never the less, there was lots to see across the show and enough exciting products to keep you entertained for hours.

EXPLORING WHAT WAS ON OFFER

Proving they hadn’t been idle during the last few months, many builders had new models, and this included the full range of Vision Offroad hybrids and full caravans from Sunshine Coast builder Sunseeker.

While Jayco and some of the key offroad brands were noticeably absent, there were well-stocked displays from New Age, Avida, Avan and Apollo, each with nearly 20 models across their ranges.

Avan-Golf now has a dedicated dealership at Burpengary and sales manager Jonathan Mangifesta was keen to show me their flagship slide-outs. The Golf 650-3 at $79,000 looked good value for touring couples that like extra room and a touch of luxury.

Mangifesta was typical of many I spoke with when he reported that sales at the show were double the previous Brisbane event. While agreeing this was partly due to the lack of competing shows, he confirmed that buyers were keen and determined.

It was a common theme amongst dealers that customers were starting to realise that stock was limited because of COVID and many were jumping in to buy before waitlists for vans blew out even further — some brands are reporting delivery dates out to December 2021 or even later!

Luxury was taken a step further at the City Caravans site where their 20ft 6in Crusader Excalibur Nobleman boasted two recliner lounges and a beautiful interior in an $85,500 package.

Searle’s RV Center from Bundaberg made their way south with a brace of Willow RV vans. The composite construction scores high for me as a great all-round tourer capable of tackling most roads on a big lap. I was taken by the new Boab 621 Family van with triple bunks and a fresh-looking interior. The $89,300 price tag included a long list of extras, and the van was snapped up early on the first day.

Our namesake, but totally separate company, Sunshine Coast dealer Caravan World had a brace of brands that included Option RV, Goodlife and Aussie Five Star, so there was something for everyone. The ironically named 19ft 6in Aussie Five Star Akubra looked smart with a composite sky-blue front panel. Included were solar and twin batteries and a full ensuite, so it seemed good buying with a show price of $56,000.

Over on the Brisbane RV stand I caught up with Steve Tauzowski and the Masterpiece reviewed in our November issue. The Extreme Offroad wowed us when we first saw it, and judging by the interest at the show, buyers were equally captivated.

Queensland is home to some of our best respected offroad builders, so it wasn't surprising to see a comprehensive representation of tough rigs.

Bushtracker flew the local flag, and I particularly liked their compact 16ft version with a narrower than usual 2.17m width for traversing winding bush tracks. With a starting price of $127,500, you can expect something special and the little hybrid delivers with 200Ah of lithium battery, three water tanks and a full-size fridge on a chassis and suspension designed to go anywhere.

Not only did Rhinomax have their steely hybrids on the stand, they also displayed two specially ordered expedition vehicles based on Iveco truck cab chassis. The company sees these new products as an extension of their hybrids, bringing a go anywhere self-driven motorhome to well-heeled explorers.

Further along, the team from Spinifex had their new entry-level Escape. Matt Williams reviewed it in our November edition before its show release at a tempting $89,500 — no wonder by the end of the first day three had been ordered, with other potential buyers waiting in the wings.

Not long ago I was at Landcruiser Park when the Sunseeker Caravans team did their best in a torture test to wreck their three new Vision RV hybrids over the steep twisting terrain. Remarkably, the vans survived, but the team looked battered and worn at the end of the day. These new models run to 12ft, 14ft and 16ft and are set to make a significant dent in the offroad market.

In the short time since the hybrid introduction, the team has managed to reinvent the larger van market with 17ft 8in and 19ft 6in caravans built to the same level of durability. The body is a full composite structure with no timber anywhere, including the furniture. The chassis and suspension are locally built custom items designed with a go-anywhere capability.

Boasting an introductory price of $110,00 for the 19ft 6in version, sales across the range were brisk, with a lot of buyers new to caravanning. Some 30 per cent of buyers were young families keen to adapt to the adventure lifestyle.

But the locals didn’t have it all their own way with dedicated full offroad vans. Summer Life is best known for slide-on campers but recently branched out into offroad vans from their factory on the NSW mid-north coast. The composite body and custom chassis ride on Cruisemaster suspension, while the furniture is bonded to an aluminium frame that becomes part of the caravan structure. Models range from a single axle 5.4m version to a 6.5m model weighing 2500kg with a 1000kg carrying capacity. We look forward to reviewing the big rig in a coming issue.

Also from NSW, but only just, was Albury builder Mountain Trail who struggled with production over COVID with many Victorian-based staff unable to get to work. Nonetheless, the dealer in Burley Heads managed to secure stock for a high-end display of innovative offroad vans that range from 19ft–22ft. For a business that began making campers in 2006, the brand has grown to number amongst of best for innovation, build quality and style.

Victorian offroaders were also well represented. Hinterland caravans on the Gold Coast had their own brand of bush tourer but also the range of Urban vans, which has so far flown under my radar. Urban is an interesting builder with a reputation for rugged remote area vans. A few years back, Hinterland caravans convinced Urban to build a range of semi-custom vans in a partnership that has blossomed and grown.

Explore RV presented their aluminium framed 16ft Legend Trackline, and it seemed to be attracting solid interest at a $3000 reduction on the $71,000 price

The Urban X’treme 20 on show has a TIG-welded aluminium frame on a double box section chassis and 4.2T Firestone airbag suspension. Aluminium composite walls gave a modern look that continued inside. Ample water capacity, solar charging and battery power should be suitable for extended free camping, and the show special price of $99,000 should see the brand with plenty of exposure.

Let’s round off the caravan section with another Victorian standout from Yatala dealer Caravan HQ. I first saw a Van Cruiser at the Melbourne show earlier this year and was immediately taken by the look and quality of these tough as nails getaway rigs. A lot of thought has gone into the Family HTO that, at 16ft 7in, includes a double bed, a set of bunks and a separate shower and toilet. Kitchens inside and out make the most of the camping lifestyle, and the 2750kg ATM means it’s suitable for a good range of tow vehicles.

As well as the various RV attractions, I also like to check out accessory items I think could be useful.

I’m a sucker for a gadget or anything that simplifies or enhances the caravanning lifestyle, and there are loads of stands offering electronics and offroad equipment. But here’s a standout.

The Australian developed Adjusta Mattress might be just the shot for a better night’s sleep. Featuring high-density memory foam, the mattress has individual adjustment each side and end. Featuring integrated body massage and a zero-gravity setting, it weighs in at 70kg, so there is little weight disadvantage when replacing the existing caravan setup. While not cheap at $5,800, a good night’s sleep might be worth it.

Throughout the day, organisers assembled Weight Towing and Touring Master Classes with valuable tips on how to set up your van and how to best make sure you are legal and safe.

Also on hand were Letitia and Adam Twist from Suncoast Caravan Service who described perfectly how to maintain a caravan and everyone attending would have learned some useful tips.

For me, the Brisbane show was a fresh blast of enthusiasm for travel and caravanning after months of COVID doom and gloom. It was great to see so many manufacturers represented after months of lockdown and uncertainty.

Shows can be a great place to inspect and compare a wide range of vans. Because manufacturers can offer special deals that flow through to dealers, it can also mean savings to buyers. There's always something new and learn, and the Brisbane show proved the local industry is in good shape to come out of the pandemic even stronger.