Malcolm Street — 1 October 2020
Caravan brakes are a safety item that often gets less attention than it should. Here’s the drum on all you need to know.

Caravan brakes aren’t an exciting or regular topic of conversation at Happy Hour — or any other time for that matter — unless, of course there’s been a problem, like an emergency braking or a loud squeal that suggests maintenance is necessary.

That said, caravan brakes are very much a safety feature, and when set up correctly, they can mean the difference between a controlled stop and one where something unfortunate happens. I’m not a total expert on brakes, so I had a chat with Chris Assat from Couplemate Trailer parts. Couplemate has a large range of caravan and trailer parts available, particularly those items relating to towing — chassis, tow hitch, suspension, brakes and wheels.

Just about all caravans used in Australia today have a braking system fitted in accordance with Australian Design Rule (ADR) 38, because all trailers/caravans with a GTM over 750kg are required to have a braking system, in addition to a parking brake. The braking system could be a mechanical or hydraulic override type (up to a GTM of 2000kg), disc brakes or, what is more commonly used, electric drum brakes. If electric brakes are fitted, then an electric brake controller must be fitted to the tow vehicle. 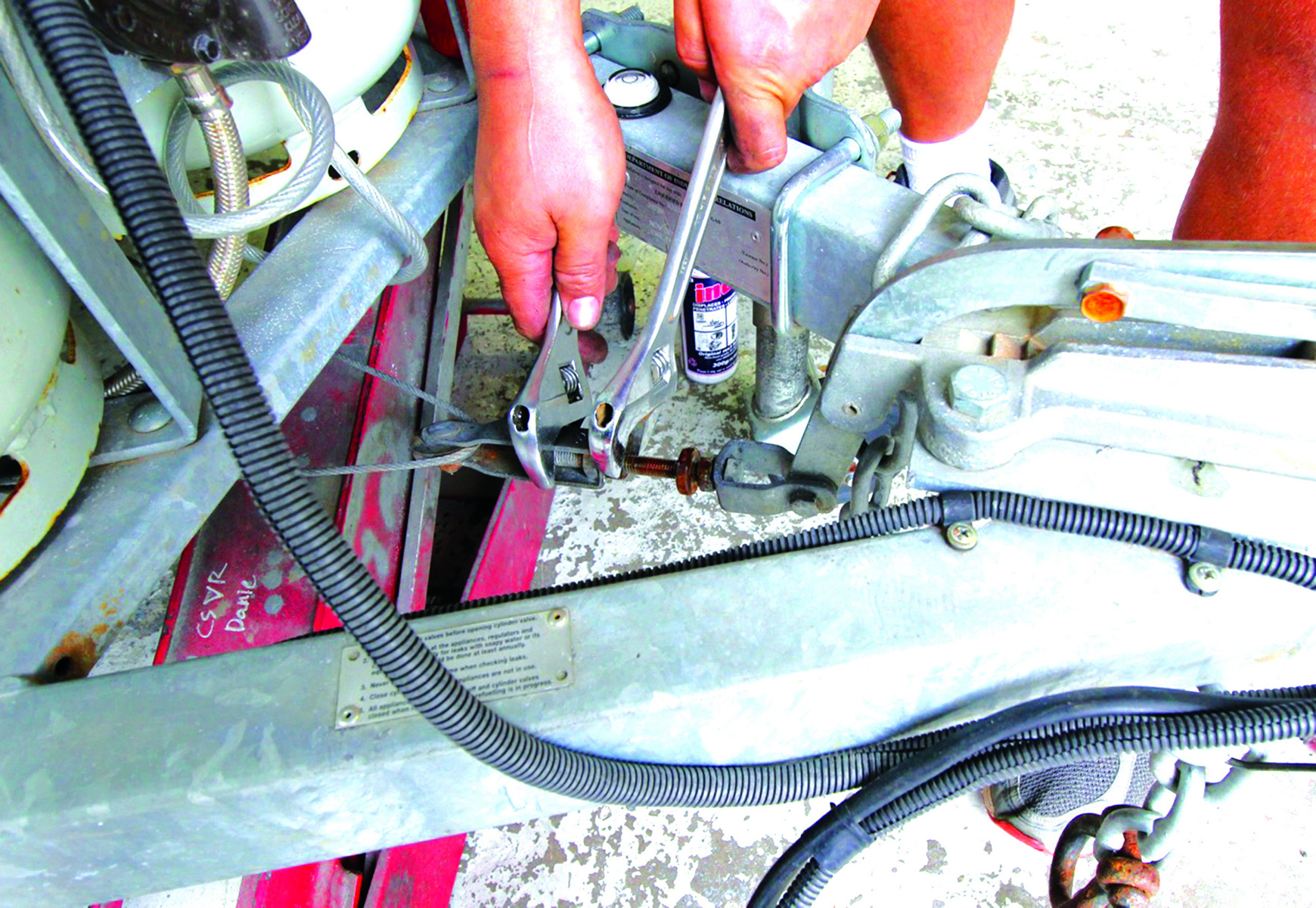 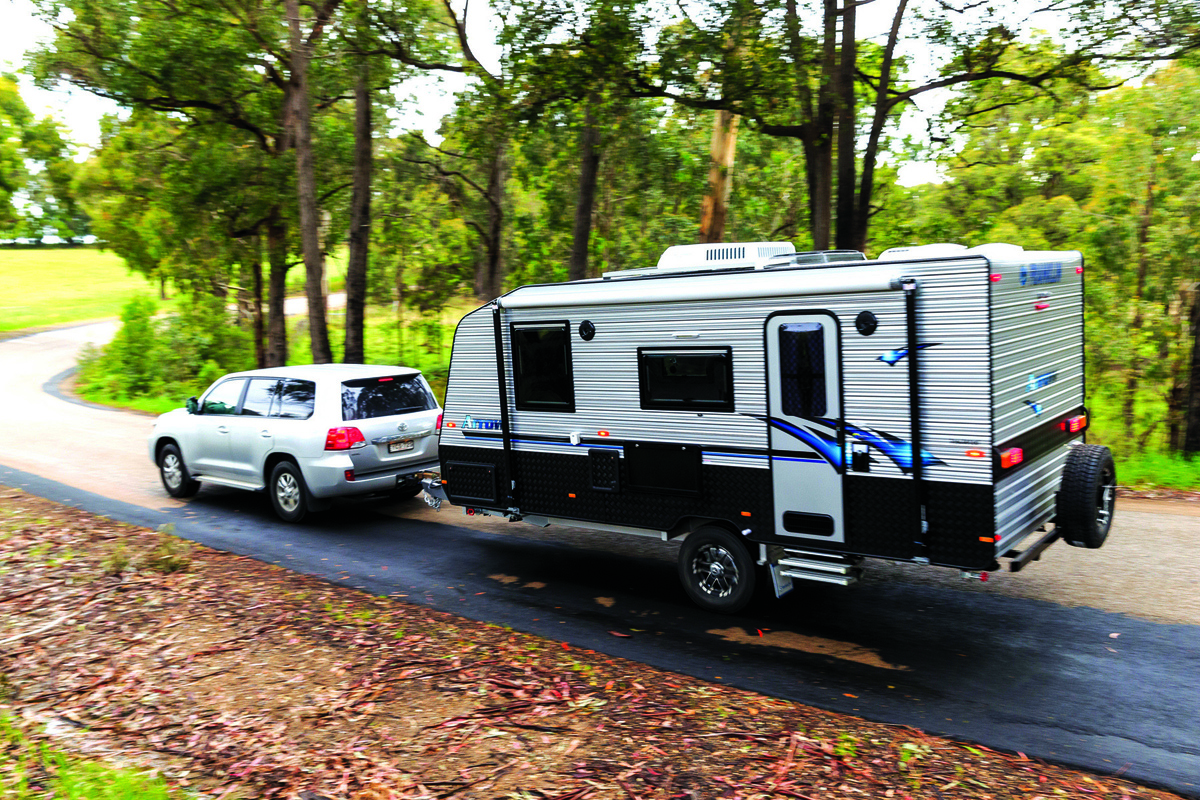 For trailers up to a GTM of 2000kg, brakes only need to be fitted to at least one axle but over 2000kg, brakes are required on all axles. In addition to that, a breakaway system must be fitted so that if the trailer becomes detached from the tow vehicle, the brakes must be applied immediately and hold for 15 minutes.

There are various types of brakes fitted to caravans, but although disc brakes are routinely fitted to most tow vehicles, drum brakes are still commonly used in caravans. There are two drum sizes available, 10in and 12in, the latter of which is required when loads over 1600kg are applied to single axle.

Drum brakes rely on the friction of brake shoes pressed against a revolving drum to function properly. Brake operation is cause by the brake controller fitted inside the tow vehicle.

One of the more important components of the brake assembly are brake shoes and linings. There are two of them and the brake shoes are usually made of cast steel or a similar material. Fitted to the shoes, the linings are made for high friction and rub against the drum interior when activated. In 10in brakes, shoes are actually different sizes, the longer one, called the primary, faces the rear of the caravan, and the shorter shoe, called the secondary, faces the front of the van.

Springs are also a feature of drum brakes. Because there are two brake shoes, the reactor springs equalize the forces on the brake shoes thus ensuring an even lining wear.

The last item found in the drum brake assembly is the adjuster spring, which can be used to adjust the distance between the brake shoes and the brake drum.

Offroad and dirt road travel isn’t always good on drum brakes. Apart from dirt and dust in the drums, a surprising casualty of rough road travel is the electric magnet. Constant vibrations and heat and dust will destroy the magnet quickly, which is why manufacturers like AL-KO have developed an offroad magnet just for that purpose.

Mechanical drum brakes operate in much the same way as electric ones, except there is no electric magnet. Instead steel cables connect the actuator to the over-ride coupling on the drawbar, which operates when the tow vehicle brakes and the ball coupling is pushed through the over-ride cylinder and against the brake handle, thus tightening the steel cables and operating the actuator. It operates in the same way as if putting on the hand brake.

As noted above, mechanical over-ride brakes are limited to caravans with a GTM of less that 2000kg and a disadvantage of the mechanical system is that there’s no proportional control and no significant adjustment.

Although commonly used on many road vehicles, disc brakes are quite rare in the caravan scene. In Australia both AL-KO and Cruisemaster make disc brakes for caravans. Similarly to drum brakes, there are a number of components that make up a disc brake. The first is the rotor, which is bolted to the wheel and rotates with the wheel. Made from either cast iron or high-grade alloys, it’s critical that the rotor has a well finished surface to ensure maximum braking effect.

Fitted to either side of the rotor, the callipers, which don’t rotate, house the braking pistons which are fitted with brake pads that clamp onto the rotor when the brakes are applied. The brake pads do wear over time and need to be replaced.

Hydraulic fluid is used to move the braking pistons and that, of course, needs something like an electric to hydraulic actuator on the caravan. The electric signal from the tow vehicle is converted into a hydraulic response in a master cylinder. Hydraulic connections with the tow vehicle are all too complicated to think about, and one of the reasons why hydraulically actuated disc brakes are far more popular on boat trailers than caravans is there are no electrics to get constantly wet and the disc brakes are far easier to wash down.

Although disc brakes have greater stopping power than drum brakes, as well as less moving parts, the prime disadvantage is cost. The fittings alone cost somewhere between $2000 and $3500 depending on the system and whether there are single or tandem axles.

For drum brakes, an essential part of the braking system is the controller. Some years ago, there was debate over the best type of brake controller. There were essentially two types, a ‘pendulum’ that operated in response to the tow vehicle’s motion, and an electronic that applied a pre-set force or time delay to the brakes.

The latter was old technology and proportional electric controllers are the thing to have these days. Manufactures like Tow Pro Elite, Tekonsha, Hayman Reese and Hayes all make them. The controller is a sensing device that determines the rate of deceleration of a tow vehicle and applies the caravan brakes to match. Some manufacturers, like Redarc, have developed a controller that has both proportional and manual override.

Drum brakes in particular can get very hot after excessive use. Whatever controller is used, they are not ‘set and forget’. Instead, they should be adjusted for the prevailing road conditions, whether driving around the suburbs or travelling down steep hills. In addition to that, when driving down long hills, it’s not good practice to brake all the way down the hill. Instead, use the tow vehicle gearbox to keep speed in check and just use the brakes when needed.

Since brakes are a safety item, regular maintenance should be near the top of everyone’s list. The two items that should be regularly checked are the brake pads and magnets, particularly the face of the magnet. Maintenance intervals vary but a guideline is 20,000–25,000km for touring caravans and 15,000km for vans that spend much of their time offroad. Another way is twice a year, say at the beginning and end of the ‘grey wave’ season. Anyone who does a considerable amount of dusty road driving or crosses creeks frequently might like to consider shortening the service intervals.

Brake linings always have to be replaced when worn but there are other reasons too, like oil contamination from a leaking axle. It might be obvious when brake linings are wearing but less so with the electric magnet, however there is quite a simple clue. The magnet has four dimples moulded into the encapsulated section. When the dimple is gone, it’s replacement time.

New brake linings, either when the caravan is new or after replacement should be bedded in. It’s not difficult process, just take the caravan for a 30-minute drive, give the brake drums time to warm up and then (pick a traffic free area) do about 10 hard stops. If you are new to the caravan towing, an additional benefit of this is that it gives an idea of how a caravan performs under braking — something better learned on quiet roads rather than in busy traffic.

BRAKING TO A HALT

Given the expense factor of disc brakes, there’s no doubt drum brake fitted caravans will be around for quite a few years yet. Undoubtedly the essential points to remember are that drum brakes are well suited to their use, that is touring or offroad, and that regular maintenance will ensure many a safe journey.

Thanks to Chris Assat at Couplemate for assistance in the preparation of this article.