We’d had a ripping few days exploring Rawson and Walhalla but with offroad tracks beckoning, we were all ready to abandon bitumen and civilisation in favour of something a bit more gnarly. As we strapped on the MaxTrax, ate breakfast at the Erica General Store and picked up our lunches from the caterer, the anticipation was palpable.

In the chill air of the morning, we set off towards Woods Point. As we traversed the southern tip of the Thomson Dam, with water to our left and a drop to our right, we could make out burnt land in our sideview mirrors. The trees on the hillside had been charred by a recent blaze — we were reminded of why we were here, and not on the other well-known route near Dargo.

So, as we advanced towards the uncertainty of the forest, awaiting the sudden sound and jolt of tyres hitting dirt, we sat in silence, asking ourselves the question, is this going to be as awesome as we’re hoping? 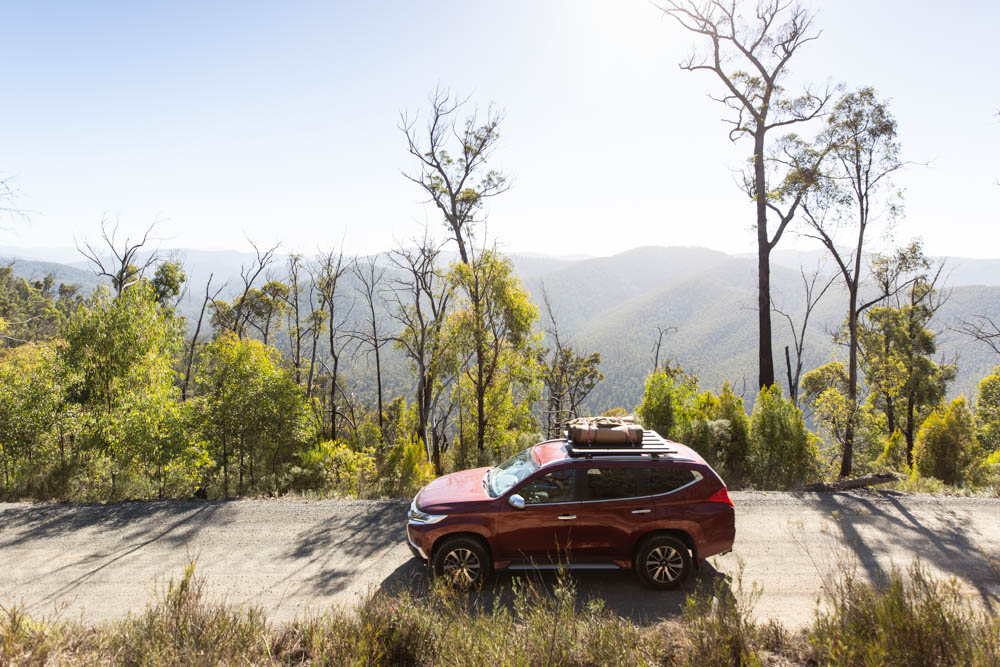 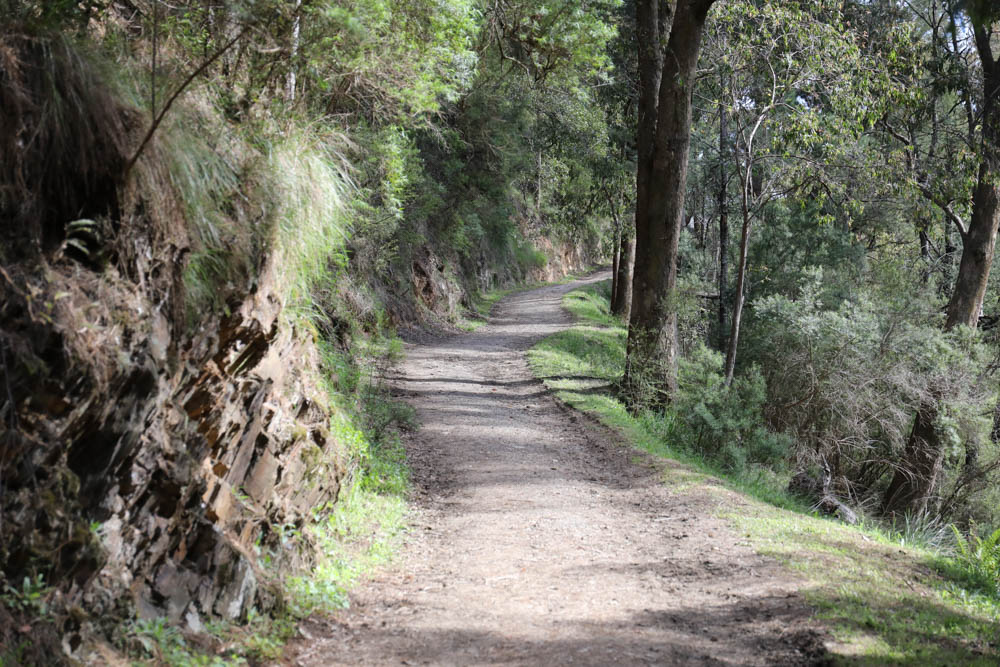 INTO THE THICK OF IT

Soon after traversing the southern tip of the dam, the Thomson Dam Access Road meets Walhalla Road, and here we turned left. Our journey was to loosely follow this Walhalla Road. For a while it winds north with the long and narrow Thomson Dam to its west and the Aberfeldy River to its east, before it breaks off north-west towards Woods Point.

Like for any good journey, our goal wasn’t just to head from A to B as quickly as possible, we wanted to take in the experiences up for grabs. So, as we went along we planned to veer off down various tracks that would spit us out higher up Walhalla Road, closer to our destination. There are plenty of tracks to choose from, so you can easily tailor the route to your ability.

The landscapes we encountered — how to describe them? Perhaps that’s best left to one of the early visitors to the region. As quoted in John Adams’ book (see footnote on p.55), one bloke describes it like this: “Stretching before us was a wide expanse of broken ground, furrowed and seared and weather-beaten, like the top of every high mountain, bearing evidence of the struggle which it had carried on for so many summers and winters… Here and there were accumulations of beautifully clear but shallow surface water, lined with ever-lasting flowers, with piles of boulders irregularly running between them; and many of these ridges of granite stones continue until they culminate in distant hillocks.”

I can quote that because the region has barely changed a jot. I will only add that the highest peak in the region is not actually Mt Baw Baw, at 1,564m, but Mt St Phillack, at 1,567m. But Baw Baw, when you can acquire enough height or flat ground to see it, definitely resonates as the major peak. ‘Baw Baw’ is the local Indigenous word for ‘echo’. Rather appropriate, given the history that affronts you at every step.

I’ll also add a note on the trees. There are plenty. Some tower, rising straight up like gunshots, creating a shady canopy. Others cluster on the ground among their trunks. These include fruit trees such as cherries, plums, raspberries, currants and blackberries — planted by people who intended on returning to them for a bit of sweetness and nutrition in the dark valleys.

AT THE MERCY OF THE LAND

People planted this fruit because they planned on staying here for a long time. They anticipated that the gold booms, which we’d seen such evidence of in Walhalla, would last. But staying was hard. People fought against the terrain at all times; that was their life.

You can understand the difficulty of their plight if you flick back through the historical records and read about the history of the railway to Walhalla. It was first proposed early on in the booms, but the higher-ups repeatedly squashed the idea because of how ‘impossible’ the terrain was. However, following tireless campaigning over decades, it was eventually constructed.

By the time it opened it was 1910 and the major gold companies had lost hope and nicked off. It is perhaps the last laugh of the land that it delayed proceedings for so long that the railway everyone had fought so hard for ended up carrying the buildings and settlements away, to be sold for a pittance — sometimes as little as two or three pounds — elsewhere.

Cut to 2019 and here we were, in a landscape that always dominated over human schemes, and what were we doing, if not scheming ourselves? We schemed our way up, down, to the left, to the right, and over bumps and corrugations, exposing ourselves to what can honestly be called an offroader’s dream. The tracks here walk that fine line between passable and impossible – enough to get the adrenaline going, while also keeping the rig in tip-top shape.

The trip afforded us many perfect opportunities to capture visuals of the hybrids doing what they do best in the landscapes they are made for – is there any better way of showing the world what they’re capable of?

Before the trip, the team uncovered an awesome water crossing at Junction Hut. This turned out to be the highlight of our offroading foray that second day. Everyone took a moment to imagine themselves set up, sitting under the awning, relaxing to the trickle of the stream. It was truly a shame to cloud up the crystal-clear water, but the splash factor was just too tempting.

In fact, it was so tempting to our videographer, Anna, that she hit it at such pace her front numberplate tore off. Perhaps the stream was angry Anna had tried to tame it by putting a name on it: "Splashvilla". Tim, Phil and I rolled up our pant legs and waded out, feeling around for it in the clouded water. It was one of those crack-up moments that only offroading can produce.

Moving on from this stunning waterhole, we engaged low range and ground up a ridge, to reveal a few awe-inspiring vistas. The drone did the best job of showing where we were – our sizeable 4WDs and hybrids appearing as just little dots in an immense landscape. It’s funny how the bigger and stronger your rig is, the more easily you can get yourself into those spots where you feel humbled by the scale of the land.

THE POINTY END OF THE NIGHT

As the day wore on and the sun began to cast golden light, the terrain appeared to ease up – until we came upon a series of sudden undulations, perhaps 15 or 20 in total, spaced out along a kilometre or two. We slowed down considerably as the towing vehicles carefully navigated over the bumps, careful not to scrape the drawbars or the tail-ends of the hybrids.

A big day like this works up a mean appetite and the time was wearing on, so photographer Phil and I drove ahead in an unencumbered vehicle towards the Woods Point Commercial Hotel, where we would all be eating and sleeping. As we approached the town, we passed a number of idyllic, uninhabited campsites positioned on flat ground near creeks in the lowest levels of valleys. Just before coming into town we made several water crossings over perfectly clear, flowing water.

We went in through the stately doors of the hotel and the sight we beheld was incredibly quaint, fit to rival the Erica Hotel. There was a brick façade, wooden interior and bar, taxidermied animals on the walls, and barrels behind the counter. The owner gave us the menus and recommended the steaks, which, she said, are ‘like the steaks Buller gets, but not $70.’

Over the CB radios, Phil and I took orders from the crew, who had by now cleared the undulations and were making good progress to Woods Point. When everyone arrived, the meals came out promptly. A harder-earned feast has rarely been had.

THE GOLDEN ERA LIVES ON

One of the campgrounds we passed on our way in, called the Comet Flat Campground, was just a little too tempting. So before heading up the balustrade to bed, we drove the short distance back. Here, we got a few fires burning to fend off that High Country chill and roasted up some marshmallows. It was a great chance to enjoy the dark dripping mystery of the forest at night, from a safe distance. I was half expecting to be confronted by a strange owl at any moment.

Afterwards, back at the hotel, a couple of night owls – arguably strange ones – sat up at the bar, spinning yarns with the owners. They poured us glasses of their infamous Tear Arse Gully Port as we chatted over the counter. We learned that there were just 31 locals left in town. At one point that number had been 1,000.

Back in those days the boom had necessitated a tunnel, allowing miners to safely transport gold into the hotel, without having to walk, brazen and gung-ho, through the entrance with an armful. Such are the stories that live on through word of mouth in Woods Point.

However, surprisingly, we learned that gold mining still exists in the area, with a couple of mine sites still operating nearby. That would account for the tradesmen who had been dining when Phil and I came in. Industry may live on but alas, it is not booming as it once was those many years ago.

We were on the home drag now. The next day we set off, continuing north towards Mansfield, which meant more river crossings, ridge riding and scenic gems. The number of campsites we passed was astronomical. You could truly spend weeks exploring this region.

Goldstream and Trailblazers had one final chance to really test their product’s grit, with a gnarly, steep uphill coming out of a river crossing. All with the peace of mind that recovery pro, Tim, was there to save the day if needed. Both hybrids went fine on the way down, but on the way back up, we did have to fetch the recovery straps.

At the end of the trip, we all sat down and debriefed over some quality tucker at Bos Taurus in Mansfield, with a few of the hungrier folks ordering the 12-hour slow cooked 500g beef long rib. The mood was just right to enjoy such delicious food — we all felt accomplished and pleasantly surprised by just how great the terrain had been. To think it was originally our plan B.

We had immersed ourselves in this part of the High Country, crossing it by vehicle, crunching its rubble and breathing its air, and had found that it was by no mean’s fool’s gold, but the real deal. Fair to say we had discovered the High Country — not the side that gets all the attention, but the hidden, unknown side. It rewarded investigation.

You can’t make these memories indoors. You need the proper setting, and it’s there, in Victoria’s north-east, awaiting anyone with the right equipment and an enthusiasm for offroad exploring.