Some of Australia’s most intriguing destinations are the ones you may not be familiar with. They are the kinds of places that travellers love to yarn about: pioneering stock routes, an outlaw’s hideaway, convict creations and a lost explorer’s camp. Here we reveal six of our favourite destinations which offer stunning scenery as well as surprising camps.

Edmund Kennedy was the explorer who almost made it to the tip of Cape York first, but his ill-fated 1848 expedition was nothing short of disastrous. When he set out from the coast near Cardwell on May 20, 1848 — with 13 men, 100 head of sheep and a convoy of wagons — Kennedy had no idea what inhospitable terrain lay ahead. 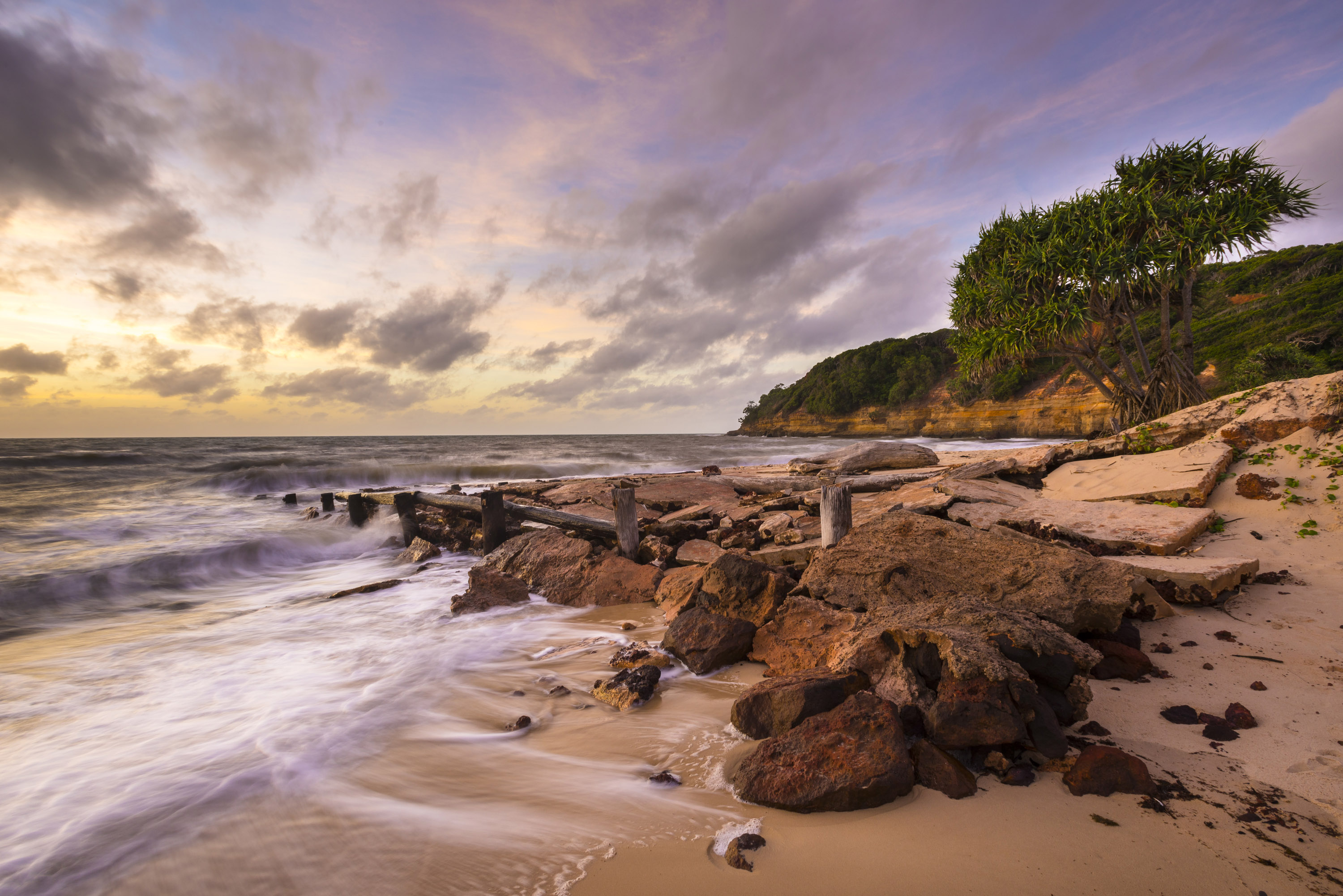 Floundering in mangroves swamped by heavy wet season rains, the men battled for 10 slow weeks only to find themselves far inland but just 16km north of their original landing point.

Fatigue, clashes with Indigenous locals and disease claimed the lives of eight men, and it just got worse.

At a camp on Cape York’s Richardson Range, William Costigan accidently shot himself and was left with two men while Kennedy and guide Jacky Jacky struggled north, a dangerously vulnerable duo. Tantalisingly close to the Tip in the mangrove-fringed channels of the Escape River, Kennedy was fatally speared and while Jacky Jacky struggled on to guide the waiting supply ship Ariel in search of Costigan and his companions, the men and their ‘Lost Camp’ were never seen again.

Today, a roadside cairn that overlooks the heath-covered shoreline where Kennedy farewelled his lost men is a poignant memorial and a must-see for Cape York adventurers who choose to follow in Kennedy’s footsteps.

When you go: The memorial is located opposite the Heathlands Ranger Base, 55km northwest of the old Telegraph Track junction. Overnight at nearby Captain Billy Landing, a stunning beachfront campground with a picnic shelter, toilets and fire pits (no pets, $6.55pp). Visit during the dry season (May to October).

In a remote corner of Carnarvon’s wild sandstone high country, an imposing bluff pocketed with ancient Bidjara burial chambers lures travellers 250km off the beaten track west of Roma. Surrounded by chiselled rock pillars and swaying blue grass plains this sacred burial site, with its distinctive rock art scenes, evokes a resounding energy, despite having been robbed of its precious bark-wrapped burial cylinders a century ago.

Known as The Tombs, it’s a spiritual place and one of the best reasons to fill your jerry cans and head west to Mt Moffatt where quiet bush camps and lingering solitude await. In the cool wintertime months you can warm up on short walks or kick back in secluded creekside camps after a day spent tackling the rugged 4WD track that climbs past lookouts to a lush mahogany forest atop Queensland’s highest plateau.

When you go: The Mount Moffatt section of Carnarvon National Park is located 250km northwest of Roma via Injune (high-clearance 4WD rigs only). Campsites at Maranoa River West Branch and Dargonelly Rock Hole cost $6.55pp including wheelchair-accessible toilets, fireplaces and drinking water. Visit from May to October.

In 1821, when convicts set to work on Bell's Line of Road, ambitiously forging a path across Tassie’s wild lands, towns en route got busy. In Campbell Town, 1.5 million bricks were constructed to build Red Bridge and, when it was finished, the flow of the Elizabeth River was diverted to pass underneath. But plagued by attacks from bushrangers, the new road never reached Campbell Town and Red Bridge was left high and dry.

Today, this alluring hand-built structure bears an annual load of around two million vehicles and is considered the oldest bridge anywhere on Highway 1. With rare, original stone abutments, it’s one of Tassie’s loveliest structures, flanked by shady willows and close to the Foxhunters Return, a popular watering hole with elaborate cellars that once housed convict labourers toiling on the Red Bridge.

The National Trust has described it as “the finest and most substantial hotel building of the late colonial period in Australia,” but perhaps more impressively, it continues to serve fine Tassie-brewed ale.

When you go: Campbell Town is located 70km south of Launceston. Overlooking the Red Bridge, Blackburn Park Reserve permits free 48-hour stays for self-contained rigs (instant online permits at northernmidlands.tas.gov.au). In nearby Oatland you can free camp on the shores of lovely Lake Dulverton. February is the driest and the sunniest month to visit Tasmania.

WA’s only POW camp couldn’t have a more beautiful forest location, but back in 1943 when it was home to the first of 1200 prisoners of war, milling the south-west’s giant karri and marri forests meant strenuous, monotonous all-day toil.

Shipped from Libya and India, Marrinup’s POWs were Italians with the rural skills needed to labour on local farms, and Germans who were renowned woodcutters who harvested the forests to supply power-hungry Perth with around 2500t of firewood each week.

To amuse themselves after-hours, the prisoners turned to gardening, building elaborate stone garden beds and fish ponds that are still visible today. Left behind for walkers to discover is Marrinup’s fascinating bedrock of compound ruins: mess rooms and meat houses, detention camps and education huts, latrines and laundries.

Close to the camp and surrounded by gentle mountain biking trails, Marrinup’s free, forest camp provides spacious campsites where you can stoke a fire and walk the circuit trail to Marrinup Falls (1.3km return).

When you go: Marrinup Townsite is located 5km from Dwellingup (head 2.5km west of town, turn onto Grey Road and veer right to the camp). Picnic tables, pit toilets and fire rings are provided (BYO firewood and water). Visit during autumn or spring.

He was a skilled tracker, horseman and marksman, but the events that turned Jandamarra into Australia’s first Indigenous outlaw took place in the Kimberley’s Lilimillura police outpost on the night of November 9, 1884. Sixteen prisoners from the Bunuba tribe were behind bars and while Police Constable Richardson slept, his tracker Jandamarra had a big decision to make.

By dawn, the deal was done: Richardson had been shot dead and Jandamarra had fled with the free men into Windjana Gorge to wage the first ever organised gun attack on white settlers who were driving cattle to start a station on Bunuba land. By sunset, two men were dead and the guerilla warfare that followed lasted three years until Jandamarra himself was shot dead outside his hideout in nearby Tunnel Creek, betrayed by a fellow tracker.

As you enter Tunnel Creek, look for the high rock cave marked by Jandamarra’s faded ochre paintings. Inside, wet-walk through 750m of chilly pools, spotlighting the little red flying-foxes that cling restlessly to stalactites, and the curtains of flowstones that drip into knee-deep pools.

Matt Buchanan pioneered the Barkly Stock Route, leading the largest single overland movement of cattle in Australia’s history, but it was while droving 100 horses home to Wavehill Station in 1886 that he took a shortcut and put our most perilous pathway on the map.

From Newcastle Waters through otherwise impenetrable bullwaddy and lancewood scrub, Buchanan’s 225km-long Murranjgi Track shaved 600km off the droving distance between the Kimberley’s cattle runs and markets in Queensland.

That Buchanan named it after a desert frog able to survive long periods without water should have been a red flag to those who followed, but this waterless shortcut lured drovers and gold-mad miners racing to the Hall Creek gold rush, many to their doom. In the early years that followed, 12 drovers perished and in one ill-fated, 1905 journey, one man, 800 cattle and 11 horses died of thirst.

Despite being inaccessible even to 4WD vehicles and little-known to today’s travellers, the Murranji Track rates amongst Australia’s most legendary stock routes, as renowned in droving history as the Canning and Birdsville Tracks.Today, it’s the rugged Buchanan Highway that provides the shortcut, leaving the Stuart Highway 58km north of the old Murranji Track and meeting it again at Top Springs — a permanent waterhole on the Armstrong River at the crossroads of the Buchanan and Buntine Highways.

When you go: From Dunmarra, follow the Buchanan Highway northwest to join the Victoria Highway 27km east of Timber Creek. This graded, gravel road is suitable for offroad vehicles and rigs over the dry winter months. Set up camp at Top Springs Hotel for $25/site or free camp at Charlies Crossing near Jasper Gorge.

It’s the tiny Queensland town with a big reputation for digging up Australia’s best prehistoric marine fossils. The number one reason to visit Richmond is to meet Dorree. The biggest, most complete fish fossil ever unearthed in Australia, Dorree steals the limelight at the Kronosaurus Korner museum from a growing collection of 100-million-year-old fish, turtles and ancient sharks and dolphins.

Canadian tourists and amateur archeologists Barb and Gary Flewelling discovered Dorree in 2008 while holidaying to celebrate their 44th wedding anniversary. “All we wanted when we came here was just to find a little fish,” said Barb, but instead they found one of the most complete fish fossils ever discovered. The pair return to Richmond as volunteers to dig for and prepare fossils for display, discovering more like ‘Minnee’ — a dolphin-like ichthyosaur discovered on a 52C day in the pits.

When you go: Richmond is located 488km west of Townsville on the Flinders Highway. Peak season prices at Lakeview Caravan Park are $28/couple and $4/child. Entry to Kronosaurus Korner costs $25/adult, $20/concession and $15/child. Visit from May to September.