Rise of the Aussie nomad

What do World War II, Cyclone Tracy and the release of Holden’s FX have in common? All three events helped to shape the great Australian holiday, long before the Big Lap and Grey Nomads embodied the Aussie idea of freedom, and caravan parks became a permanent fixture on our landscape.

Travelling out of choice, rather than necessity, is a relatively recent trend in Australia’s short, holidaying history, and before roads led west, before long service leave and super funds financed our adventures, and before 4WDs and GPS guided us safely into the outback, a hardy breed of pioneering Aussies packed up and hit the road. It was the late 1800s, and it was no holiday. 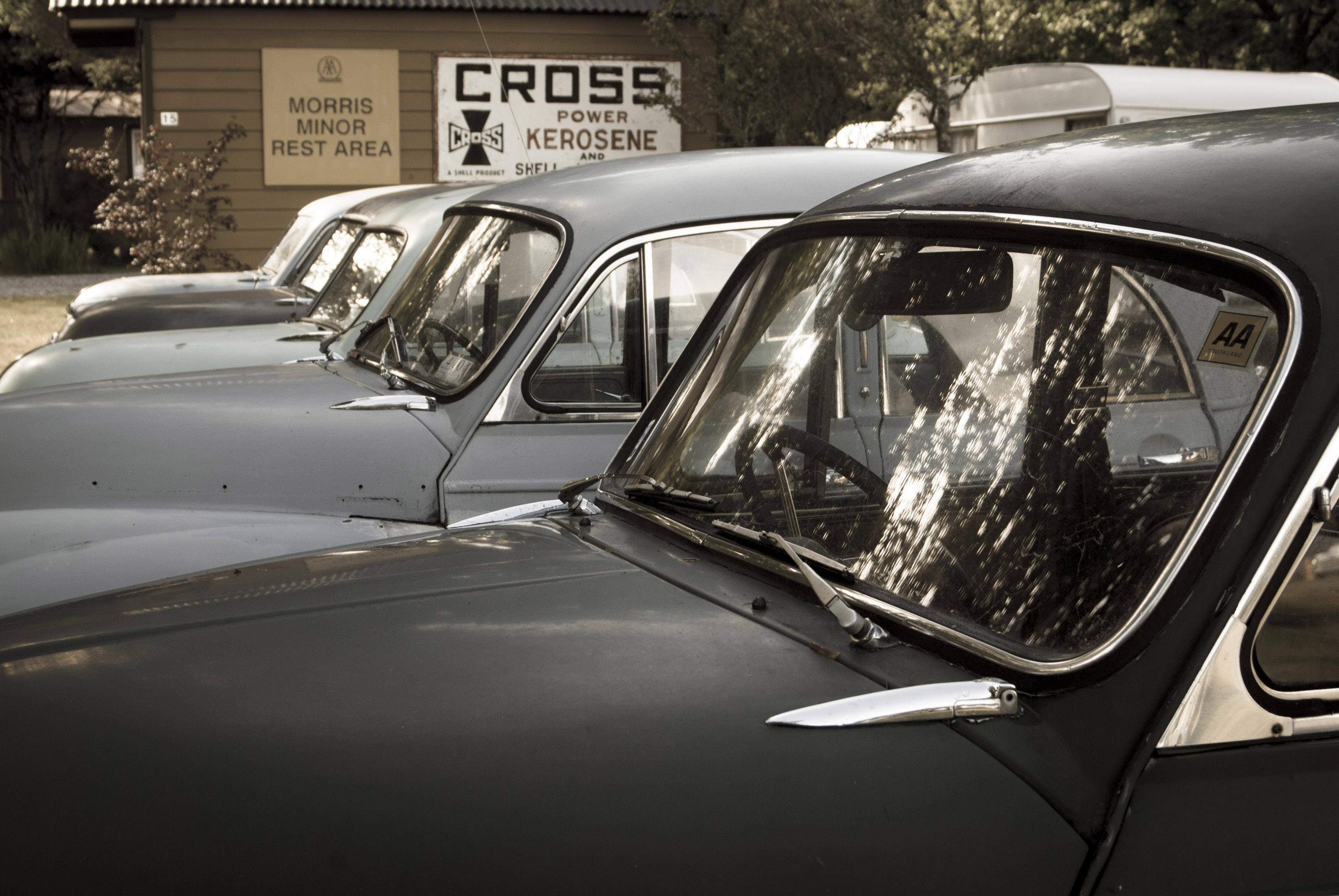 Driving bullock and horse-drawn wagons stretched with canopies of calico, animal skins and sheet metal, the offroad rigs of Australia’s earliest explorers provided few creature comforts. Setting off into the unknown outback, Australia’s surveyors, cattle drovers and teamsters endured the slowest of journeys and the toughest of times and, though long-promised fortunes rarely materialised, death was an all-too-often certainty.

Joining them was a steady stream of bush hawkers; piano tuners and photographers, barbers and bootmakers, saddlers and whipmakers who were ‘on the wallaby’ too, lured by the poets, artists and bushmen who romanticised inland Australia.

They wrote and sang of the immense pleasure of being in the bush, of the ever-changing landscapes, the wild encounters and the thrill of testing their skills in situations city folk could only marvel at.

AB ‘Banjo’ Paterson penned his most popular ballad Waltzing Matilda while visiting Dagworth Station near Winton, Queensland in 1895, and Dorothea Mackellar’s 1904 poem My Country inspired a nation’s wanderlust with the words: “I love a sunburnt country, a land of sweeping plains, of ragged mountain ranges, of droughts and flooding rains.”

Adventurous Australians were hooked and by the 1920s, weekend motor campers were hitting the open road with a boot-load of camping equipment to immerse themselves in the outdoors. What is thought to be Australia’s first caravan park for travelling campers opened at Woodend, Victoria in 1924, and a new breed of DIY’ers got busy in their backyards.

These homemade caravans were basic and heavy, but a bloke named R.J. Rankin created an ingenious little covered wagon that launched the Caravan Park Company, later known as Carapark.

Caravans’ popularity might have boomed if not for an event that took place on the other side of the world. When Wall Street crashed on October 1929, falling demand for Australian exports sent prices tumbling and unemployment figures soared to record heights.

For the next three years, the Great Depression delivered a humiliating blow of poverty and unemployment to the vast majority of Australians, a third of whom were out of work by 1932. Now, workers deserting the cities in search of low-paid jobs on the land became the unhappiest travellers to be ‘on the wallaby’ too.

Conversely, the Australian holiday emerged — at least for the privileged — at precisely this time, thanks to the Victorian and New South Wales governments which funded the construction of tourist roads, ironically built by men who had little hope of ever travelling them.

Car ownership would not become commonplace until the 1950s, but if you were one of the few who could afford a car and the hefty petrol taxes, you could arm yourselves with a copy of the NRMA’s Motor Camping Guide and escape the misery. For the rest of the population, it was Don Bradman’s record-smashing exploits on the cricket field, and Phar Lap’s 14 successive track wins that kept spirits buoyed until the Great Depression ended in 1932 and Australians could get back to work.

Once Aussies again had money in their pockets, wanderlust returned and caravan manufacturers went into overdrive: Jennison, Wolfenden, Don, LandCruiser, Furness, Carapark, and the Brewer company which launched an innovative caravan with a slide-in boat on the floor.

A favourite among today’s vintage van-lovers, the Teardrop hit the market in 1932. Weighing in at 7.5cwt it impressed travellers with its compact waterproof and dustproof design. And it could be towed by a tiny Austin 7.

Vast improvements in the reliability, comfort and engine power of cars meant that towing a caravan was not the risky endeavour it had been a decade before. Caravans changed, too. In 1939, just as bitumen roads were advancing around the country, Caravan Parks produced the Superb, Australia’s first steel van.

For Australians enjoying a prosperous return to jobs, the motor holiday promised the freedom and flexibility that the rail holiday, with its timetables and set destinations, did not. Car travellers, theoretically at least, could holiday anywhere, anytime. But almost as soon as it began, WWII was declared and the motor camping holiday was over.

During the long war years (1939-1945) travel restrictions, high petrol taxes and rationing brought road traffic to a standstill. The production of caravans ground to a halt as factories switched to producing guns and munitions, and owners mothballed caravans that couldn’t be maintained since tyres, paint and other materials were impossible to source. Government funds were diverted from road works to the war efforts, beach holiday destinations were barricaded against the enemy, and the pleasures of holidays became a guilty, distant memory.

The end of the war heralded the start of what the Sydney Morning Herald called in 1947, the ‘Great Holiday Boom’. A rush of affordable European and English sedans onto the market coincided with pay increases and big changes at work: two weeks of paid annual leave, a two-day weekend, and for many, regulation of the 40-hour working week and even long-service leave.

While it might once have been just a dream, for Australia’s post-war families, owning a car became almost as important as owning a house and suddenly, everyone wanted to hitch up and go.

With more time off and the money to cover holiday expenses, Australians embarked on annual beach holidays and forays into the little-explored outback, armed with maps provided free-of-charge by oil companies and motoring associations.

The introduction of the production line revolutionised caravan manufacturing, and Australia’s Big Four led the way: Viscount and Millard in NSW, Franklin in Victoria, and Chesney in Queensland. In all, 22 manufacturers joined Australia’s inaugural 1954 caravan show in Melbourne showcasing their affordable, lightweight caravans decked out with Laminex benchtops, vinyl couches, carpeted floors and innovative gas and electric-powered kitchens.

When Australian Prime Minister Ben Chifley launched Holden’s FX in 1948, one in every 10 Australian homes had a car in the garage. Once homegrown cars went into production in the mid-1960s, most Aussies had access to one and with rental caravans readily available, the caravan holiday could finally begin.

THE AGE OF THE CARAVAN

In the 1970s, a fifth of Aussie holidays were spent in caravans and with around 190 caravan manufacturers crowding the market, the choice of rigs was incredible. Then the bubble burst.

Just as manufacturers were enjoying a spike in demand from the mining sector for caravans to house workers, a series of unconnected, unforeseen economic and social forces dealt a devastating blow. On Christmas Eve 1974, category 4 Cyclone Tracy hit Darwin with devastating force, leaving 71 people dead and 41,000 residents homeless. With 80 per cent of Darwin homes destroyed, the Federal Government ordered three companies – Chesney, Viscount and Franklin — to build more than 1000 caravans to be used as temporary accommodation.

This spike in caravan orders would have an unexpectedly ironic consequence. Once Darwinians rebuilt their homes, the market was flooded with second-hand caravans and the sales of new models stalled.

It was all too much for the manufacturing big guns. Between 1975 and 1980, Chesney and Franklin were sold to public companies and a few years later, closed down.

Receivers moved in on Coronet and others, and in 1978, Millard was bought by Viscount, which in turn went into receivership 10 years later.

It would be two decades before the industry would recover, but in the meantime, industrious designers went back to the drawing board with two very different customer groups in mind.

Throughout the 1980s and '90s, families escaping the beaten track for remote wilderness destinations fuelled a demand for offroad camper trailers.

While back on the bitumen, retirees preparing for the tour of a lifetime shopped for smaller, lighter pop-top caravans with improved fuel economy to drive their superannuation dollars further.

BRING ON THE BIG LAP

Aged pensions introduced in 1909 to remove older workers from the labour market, offered absolutely no hope of a holiday for seniors. It was the parents of baby boomers — those born in the 1920s and '30s — who benefited from secure, post-war jobs and attainable home ownership, and became the first generation of Aussies to enjoy a decent retirement.

Caravan sales trebled in the 1990s and, by the time the new millennium arrived, the first ‘Grey Nomads’ set off around Australia in rigs most likely bearing the badge of the new Big Four — Jayco, Coromal, A-Van and Windsor — which now controlled 70 per cent of the caravan market.

Hot on their heels around Highway 1 came a younger generation of self-funded retirees, home-schooling families, footloose young couples keen to see the country, and a growing influx of foreign tourists inspired by documentaries about our great outback. New caravan registrations increased by 257 per cent between 1995 and 2005, and rose a further 29 per cent over the next five years.

In 2019, tackling a Big Lap still rates high on bucket lists, but we are no longer focused solely on a lengthy circuit of Highway 1.

Today’s travellers are leaving the bitumen in droves with daring, offroad itineraries in hand and a new obsession with free camping that’s as much about saving money as testing our own self-sufficiency in remote destinations, far off the grid.

In the future, RV travellers will no doubt continue to seek offroad capability in new vehicles, vans, and camping and communication equipment, because today, the call of Australia’s wild places has never been louder.