The Pinnacles in the Nambung National Park on Western Australia’s Coral Coast region is one of those destinations better known overseas than its is to locals. Ask any UK tourist what their top things to see in WA are and the Pinnacles – along with Wave Rock near Hyden – are always high on their list.

As we were headed northwards to Geraldton, WA, to pay our respects at the HMAS Sydney II memorial, we stopped in to check out what all the fuss was about, rounding out a nice long weekend trip out of Perth. 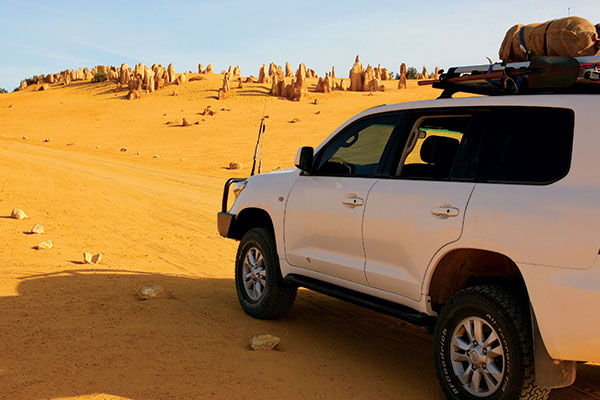 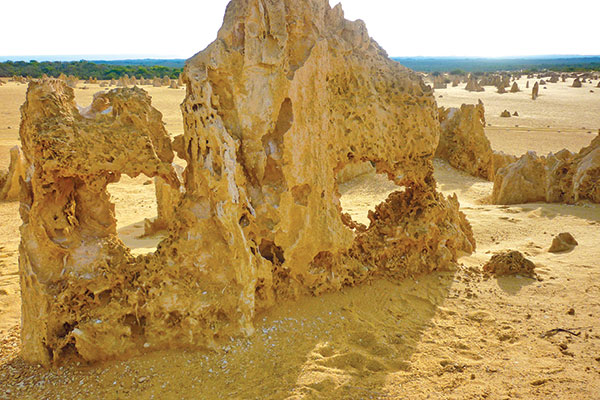 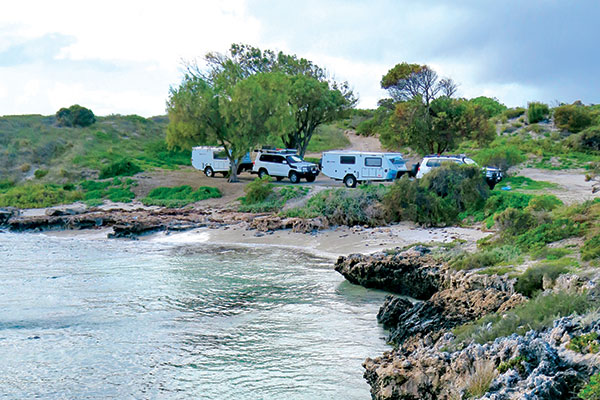 Although the Indian Ocean Drive has a fraught reputation, we thankfully enjoyed an uneventful and scenic drive up the coast, avoiding the heavy freight traffic otherwise encountered on the alternative route north, the Brand Highway.

The entrance to The Pinnacles is about 17km south of Cervantes. The access road in is suitable for 2WD and towing vehicles, but you’ll have to unhitch the van to drive the 4km one-way loop road, which winds its way between amazing limestone pillars, the drawcard of Nambung National Park. Alternatively, if unhitching is too much of a drama, there is a 1.2km walk which leads from the carpark.

We opted to do the drive and found plenty of opportunities to pull over and get out to wander amongst the thousands of weird and wonderfully shaped limestone pillars, some up to 4m tall. The Pinnacles Desert Discovery Centre, which opened in 2008, has an array of interesting interpretive displays about the pinnacles as well as the surrounding area and is worth a look on your way in.

It’s recommended you allow about two hours to look around, with the set walk trail estimated to take about 45 minutes. It’s great that you can still get up close and personal with the pillars and wander to your heart's content – just no climbing on them, please. Although the Pinnacles might not have the overwhelming wow-factor of some other big-ticket natural attractions, they are well worth a look.

There’s no camping allowed in Nambung National Park, with the closest facilities in Cervantes. Here you’ll find a caravan park and other accommodation options. We decided to go a little less structured and check out the newly-expanded Sandy Cape Recreation Park, which is a little further to the north just past Jurien Bay.

The access road is partially sealed and looks accessible for most conventional vehicles. Camping is on a first-come, first-serve basis and there is no overflow. There is usually a camp host on site during peak periods. The bays are bollarded with red pea gravel bases and there are drop toilets. There is also a large skip bin for rubbish and an easy-dump point for black/grey waste but no running water. To the north and south of the main camping areas are some 4WD-only accessible tracks with a few camping possibilities, but access is tight and if they are taken then turning around can be a challenge. If you do manage to score one though, as we were lucky enough to, they are lovely spots.

The coastline along here is stunning and well worth a walk. There are some lookouts and elevated walkways accessible from the beach behind the main campground, but we found a lot of it was buried by shifting sand dunes, so you’ll need to slog the soft sand in parts. But it is absolutely worth it for the sweeping views along the coast of soft white sand bays contrasting with rugged limestone cliffs. Fishing and sandboarding the steep dune faces are also popular pastimes in this part of the world.

The next day our sightseeing took a more man-made turn as we arrived in Geraldton and made our way to the HMAS Sydney II memorial. Dedicated in 2001, it is a memorial to the 645 souls who lost their lives when the HMAS Sydney II sank without a trace off the coast of WA. There are a number of different components to the memorial, including the soaring Dome of Souls that comprises 645 seagulls (one for each life lost), information and remembrance panels and the towering Stele, symbolising the prow of the HMAS Sydney II.

On a more intimate scale, there is the Waiting Woman statue, which symbolically looks out to sea, waiting for the return of her loved ones. In a twist worthy of a Hollywood movie, when the wreck of the HMAS Sydney II was finally discovered in 2008 it was found that by pure chance the Waiting Woman was, in fact, gazing along the exact compass bearing to the ship, well before the site of the wreck was known. A Pool of Remembrance was added to the memorial to commemorate the finding of the lost ship, at the base of a sunken terrace, symbolising the war grave where the Ship now rests on the sea floor 120nm off the coast. And the Waiting Woman no longer gazes and waits, but keeps watch over loved ones lost.

The Geraldton Voluntary Tour Guides Association offers daily tours of the Memorial at 10.30am most days, explaining the story behind what you are seeing. Alternatively, if you miss it like we did, it is well worth a read of the Memorial’s website at www.hmassydneymemorialgeraldton.com.au, to get a real feel for the history and symbolism behind the different components of the Memorial.  You’ll also be able to catch up with the latest happenings in ‘The Battle of the Bathroom’ – an ongoing tussle between the City of Greater Geraldton and the local Rotary club regarding what form the still-to-be-built public amenities at the site should take. Rotary wants to see the amenities built as envisioned by the original designers of the site, whilst the council is proposing a standard toilet block. It’s a passionate debate from both sides, but one thing’s for sure, the current single public toilet leaves a bit to be desired.

There are a number of caravan park options in Geraldton. We opted for the Batavia Coast Caravan Park, located in a bush setting on the north side of Geraldton. Though not brand spanking new, it was clean and quiet with lots of native birdlife and a bit of character (look out for drop bears!). If you have the time, Geraldton is a tourism hub in its own right, with plenty to keep you entertained. But with work calling, we’d had our weekend escape and would be heading home next morning.

A nature-inspired wake-up call got us up and about early when a huge flock of pink and greys descended on the caravan park just as dawn broke. Their raucous calls and playful antics went on for a good 30 minutes, proving great entertainment whilst we got that all important first mug of caffeine into us. What a way to start an Aussie day.

The full destination piece appears in Caravan World #573 2018. Subscribe today for the latest caravan reviews and news every month!