It’s the colours which will be forever etched in your memory when travelling the Mid West coast of WA. Roads which meander through a carpet of gold, while in the distance snow white sand dunes rise from the landscape against a turquoise ocean.

The beaches here, so isolated they are nesting havens for rare birds, have to be some of the best kept secrets in coastal camping in this country. 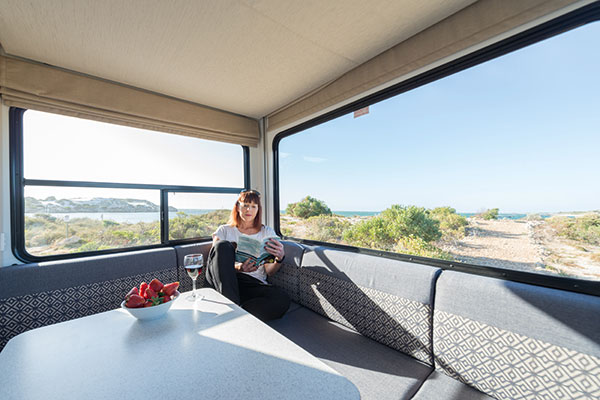 The privileged few who have set up camp are mostly from Perth, and are  quick to tell you they’d prefer the sites weren’t over-run with tourists - but in this part of the country, where the fishing industry, much like mining, is no longer leaving an economic footprint, tourism is now its much needed mainstay.

It’s the reason four of the local shires banded together to invest in preserving this pristine stretch of coast. Sourcing funding from grants, they built safe walkways linking look-outs and protecting native plants, installed toilets and bbqs, and improved signage, and now they are ready and waiting for the tourists to come.

It’s a warm invitation, and one that treats you to a pretty drive regardless which direction your journey starts. For us, it was from the city of Perth, where we picked up our KEA Cascade four berth motorhome from Britz Campervan Hire. Within two and a half hours we were pulling into the village of Jurien Bay with its stunning pier jutting out into a glistening harbour, the perfect spot to stop for fish and chips, and a quick 15 minutes later, we were on the unsealed road to Sandy Cape Recreation Park, where emus and kangaroos dominate the population.

The first of the camp sites along this coast to be touched by the Shire of Dandaragan’s regeneration initiative, there are sites north and south of the beach, and it wasn’t long before caretakers Rhonda Field and Gary Smith had us set up on a site with stunning ocean views.

Originally from regional Victoria, Rhonda says they initially fell in love with the white sand and ocean, and now it’s about the people they meet, and Gary says the fishing’s not so bad either.

The calm waters are also perfect for swimming and kayaking, and you’ll never struggle to find a spot on the beach.

For the kids, the highlight is undoubtedly sand boarding, and with dunes dominating the landscape, it’s not hard to see why.

PASSION OF THE PEOPLE

Heading north to Green Head (population under 300) we meet some of the determined and passionate locals who have helped the shire turn its vision into reality, like Deb O’Brien, who moved to the tiny town from Victoria with her husband in the mid 70s. At the time she was the only woman to brave the population of fishermen, and brave she was.

She lived with no power and no water for seven years in a fisherman’s shack in Little Anchorage Bay, and for the first year, it was the only shack for miles. Not helpful when her husband was off on a fishing expedition and the car broke down leaving her stranded for four days. Fearing she’d lose her voice, she sang to the transistor radio and waited, hoping someone would come to visit her, which they eventually did.

A passionate coastal advocate after seeing work that was done in Sorrento in Victoria to preserve the coast there, Deb first approached the shire some 20 years ago with a vision.

Then ten years ago she formed the Green Head Coast Care group to create the ‘three bays walkway’, and she says it’s humbling to now see the group’s plans come into fruition, including the first paths installed along the coast at Dynamite Bay, so people have safe path access, and to protect the native bush.

She says the final works will be completed in the next few months, which will see the first walkways between Dynamite Bay, South Bay and Anchorage Bay, and when that’s done, “there will be a huge celebration”.

Then the rehabilitation and maintenance work begins, and the group will start work on its master plan to connect the townships of Green Head and Leeman. Currently the only way between the two communities, which are 14 kilometres apart, is by the main road. “We’ve worked out a route which is achievable to bring the two towns together, and I think that’d be a great way to connect the two communities.”

While she’s reluctant to take all the credit for the work of the group she started, there’s no denying the drive of Deb, who has plans with council to develop her art gallery, Green Head Gallery, into a café and accommodation, to drive tourists to town; and with a beach directly across the road from her house, it’s not hard to see why it’d be an attractive option.

This quietly spoken talented artist paints in her maiden name ‘Crookes’, “as a tribute to my father who loved art,” with her works depicting the stunning coast lines she’s worked so hard to protect.

Deb’s gallery is fittingly in a fisherman’s shack, and if you’re lucky she’ll serve you one of her trademark sponges and a cup of tea. Well no luck is needed really, Deb’s about as hospitable as they come.

MOVING ON TO MILLIGAN

Five minutes from Deb’s gallery is the Milligan Island Eco Camp. Designed to reflect an Aboriginal artwork, the large circular sites are tucked behind the sand dunes amongst natural vegetation.

Much like its southern sister, Sandy Cape, the open stretch of beach is isolated and breath-taking.

Similar in size to Green Head, the township of Leeman on the northern side of the coast is about 10 minutes from Milligan Island.

Its small pier, the perfect launch pad for a tinny to go crayfishing, but these towns offer a lot more than just the perfect coastline.

The region is also home to the Australian sea lion, listed as an endangered species. About 20 per cent of the Western Australian population of sea lions live and breed in this region, and from Dynamite Bay you can often see them popping their heads between the bays, or for a closer look, get out and swim with them.

For those more interested in flora than fauna, the nearby Lesueur National Park is home to more than 900 species of wildflowers, some of which are found nowhere else in the world.

CASTING OFF TO CLIFF HEAD

A one hour drive from Leeman is the town of Dongara, where cafés sit under century old Moreton Bay and Port Jackson Fig trees.

Here we grabbed some retro hire bikes from the local backpackers and headed to Port Denison via Granny’s Beach. This  mini-beach sets a stunning backdrop to the Green Beanie, a 1964 converted BiTone vintage caravan serving contemporary-style coffees, tea and smoothies.

A four kilometre pedal from Dongara is Fisherman’s Lookout and the obelisk, built in the late 1800s to commemorate the sailors’ lives lost at sea, which provides a panoramic view of the harbour, and while you’re in town, pull in at the Dongara drive-in and catch a movie. There’s plenty of parking for your RV and a café on site serving everything from popcorn to pizza.

When it’s time to retire, head out to Cliff Head, a free camp site 30 minutes away which is nothing short of spectacular. There are toilets here, but little else, so pack some supplies from town before you leave.

Lying in your RV you’ll hear nothing more than the waves lapping on shore, and the only visitors you may get, besides the few campers who have been lucky enough to find this location, are inquisitive dolphins metres from the shore line.