Travelling to the north-western mining city of Mt Isa from Queensland’s tropical city of Townsville means more than leaving the coast. It means finding the heart of Queensland’s Outback. It’s a journey that is not far short of 1000km, and it lands you within a two-hour drive of the Northern Territory border.

FIRST STOP – A STEP IN TIME

It’s a four-hour drive from Townsville to our first stop Hughenden. However, the trip demanded a detour to historic Charters Towers. Anyone interested in a town with more history and majestic heritage buildings should find time to pay this area a visit. Folklore has it that in the late 1800s, Charters Towers, the town they call ‘The World', was born to the sound of thunder and flashes of lightning. Hugh Mosman, George Clark, John Fraser and their horse boy Jupiter had been prospecting to the south of what is now Charters Towers, when a clap of thunder spooked their horses. While searching for the horses the first Towers gold was discovered. 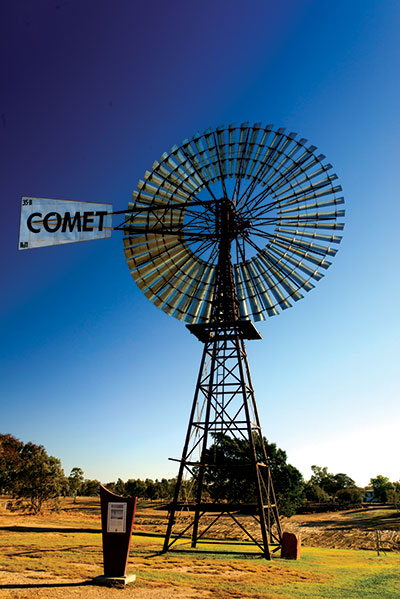 After some time here, we continued on our way to Hughenden via a small town called Prairie. This blink-and-you’ll-miss-it village has an intriguing pub with a convenient camping spot out the back. There was no time to test it out, as Hughenden was calling.

Resting peacefully in the black soil plains, the town that locals call Hughie sits in dinosaur country within cooee of four national parks that are amid a volcanic basalt mountain landscape. Once in Hughenden you can make plans to tackle the nearby Porcupine Gorge. However, before you head off, take a little while to wander around town and check out the large windmill not far from the river.

Given that the image of a windmill down by a river is an iconic outback look, the Hughie windmill is unforgettable given it’s one of only 15, 11m mills ever manufactured. At full tilt, this mill could pump in excess of a million litres of water per day. But it’s not the only windmill in town.

While the rotunda is the epitome of creative usefulness, it’s not the only impressive artwork around town. There are several artistic nods to the town’s dinosaur connection including Darby the Dinosaur, a muttaburrasaurus; Leanneosaur, a flying metal pterosaur; and a representation of an ancient sea creature called an ammonite.

Perhaps the most impressive is Mutt the life-size muttaburrasaurus. Word has it that Mutt wandered into town from the Tropical Museum of Queensland in 1999 and the thirsty dino’s been waiting for a cool ale outside the Grand Hotel ever since.

Unfortunately, these day’s he’s going thirsty. Like Mutt, the old pub’s extinct – an aged fossil of more rollicking times. Nonetheless, there are two other perfectly good pubs not far away including the Great Western and The Royal Hotel. Those hankering to shoot some pool can drop the eight ball at The Royal if you don’t mind bouncing around a round table. Perhaps that means sinking it clean might be called a Camelot hustle.

Near Hughenden, Porcupine Gorge National Park is said to be Australia's Little Grand Canyon. It doesn’t disappoint. Through millennia of weathering and erosion, Porcupine Creek has carved through 25km of sedimentary rocks revealing countless rock formations including an isolated sandstone monolith called Pyramid rock. Although, when I arrived, Porcupine Creek was little more than a meandering string of clear waterholes, oases under the hot sun, it is, come the wet season a boiling cascade hell-bent on bending and shaping the gorge.

The development road to the gorge is more than a conduit to a remarkable campsite. Along the way is a world of intrigue by way of local secrets and too often overlooked stories. While you can enjoy an intriguing first glimpse of the gorge around 50km from Hughenden at Eagle Hawk Gorge overlooking Devil’s Elbow, just beyond you’ll find two unmarked graves. The first is of an Indigenous girl called Minnie Waite who is believed to have perished by foul means, and the second is to the packhorse mailman of 1886 who lost his life when he was speared by Aborigines from the top of the ridge. His crime, if any, is unknown.

Those looking to camp will find a good camp ground near Pyramid Lookout but, like folk of long ago, campers must be self-sufficient.

Anyone who’s ever ventured west to Julia Creek in April will be well aware of its Dirt ’n’ Dust Festival. Well along the trek to Mt Isa, Julia Creek is a worthy stopover even when the festival isn’t causing a raucous putting on a major triathlon, horse race, bull ride and the rather anachronistic Australia's Best Butt Competition.

Although there are two reasonable pubs in town, for my money, you’ll go a long way to find a better feed and colder beer than you will at the Julia Creek Hotel, down by the train tracks. When it comes to dossing down for a night or two, you can’t go past the little retreat down by the creek. It’s a caravan campsite ideal for those that enjoy the freedom of being self-sufficient while enjoying the company of other modern motorised wayfaring strangers. Mardi and Tony Johnstone had previously travelled around Australia on a Goldwing motorbike until caravanning grabbed their attention. And then they found Julia Creek. Mardi explained they first encountered Julia Creek when taking up volunteer work as campground managers recently.

Mardi said that it was the fine warm weather that got them to stay. However, her partner Tony said it’s the town’s hospitality and the warmth of the community that keeps them such a long way from their Adelaide home. He said that town hospitality is regularly extended to caravanners camped by the creek with local charities or businesses putting on food and entertainment in town. What’s more, the permanent lagoon means great fun for bird watchers as the habitat attracts all manner of feathered companions.

They call it the Isa; Mount Isa seems too formal for these parts somehow. Whatever you want to call the city that is at the heart of Queensland’s northwest, when you visit, you are in for an experience.

After more than 900km on the odometer since leaving Townsville, Mt Isa doesn’t disappoint. From the first moment that you enter the information centre and discover the Outback Park with its creative outback experience, the Riversleigh Fossil Centre or the Hard Times Mine replica underground experience you know this town has so much to offer. Although the mining downturn seems to have taken its toll, Mt Isa has plenty of food experiences, good accommodation options and natural beauty by way of nearby Lake Moondarra or the Boodjamulla National Park a little further afield. The emerald waters and lush vegetation of Lawn Hill Gorge within Boodjamulla provide ample opportunity for walks, canoeing and exploring cultural sites.