It had been a few years since we visited Yungaburra in the Atherton Tablelands, west of Cairns, but friends had recommended the Lakeside Motor Inn & Caravan Park, which was reason enough for us to head back there for a week’s stay.

Yungaburra is best approached from the south via the Palmerston Highway, which runs west from Innisfail. The town sits on the edge of Lake Tinaroo, and is about 730m (2400ft) above sea level, so it is much cooler than the coast – bring a jacket for the winter nights.

A picturesque village with many heritage-listed shops, Yungaburra is central to Atherton, lakes Barrine and Eacham, and all the Tablelands attractions. The hanging baskets of coloured annuals add to the town’s quaint, old-time atmosphere. 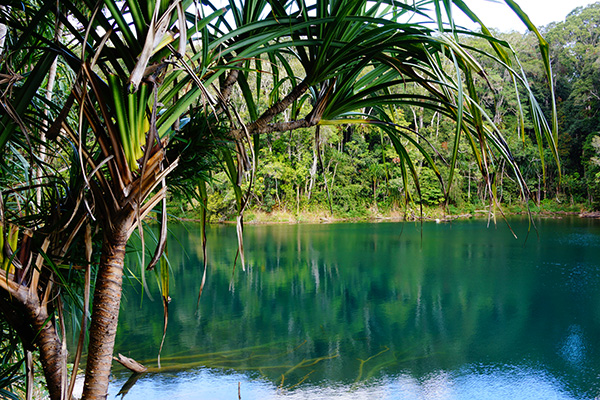 Apart from the cafes, restaurants, arts and craft shops and accommodation choices, there is a hotel, FoodWorks supermarket, two fuel outlets, butcher, baker and the usual small shops for a town of this size. You will also find a lawn bowling green and tennis courts.

There are remnant patches of rainforest in the area, although much was cleared by early settlers for dairy and crop farming. The countryside is a lush green in most seasons; the rolling green hills reminded us of parts of New Zealand.

THINGS TO SEE AND DO

Yungaburra has many charms. A walk around the shops is an attraction on its own, as there are 18 National Trust-listed buildings.

Along the water’s edge beside the caravan park is the famous Avenue of Honour, flanked by flame trees to honour the soldiers who gave their lives in Afghanistan. It contains a sculpted memorial, which was built with $300,000 raised by the local family of Ben Chuck, who was killed in Afghanistan in 2010. A roll of honour lists the names of all who were killed in this war. When the flame trees are in flower, this will be a spectacular sight.

At the bottom end of town is Peterson Creek. Platypuses live in the creek, and there is a viewing platform near the bridge. To find a platypus, look for the tell-tale signs of bubbles with ripples emanating out from them.

A 2km walk continues along the bank of Peterson Creek, which has been re-planted with thousands of local native trees by an enthusiastic band of volunteers. You can also join the walk in the middle, where there is a suspension bridge. The creek contains platypus in several spots, there is a large turtle population, water dragons and many types of birds, including scrub turkeys, wompoo pigeons and three types of kingfishers. There are several tables and chairs for a rest in grassy areas beside the creek.

The area is also home to the famous Lumholtz tree-kangaroo. A tree-climbing kangaroo? That’s right, so be sure to look up; they are sometimes seen way up in the treetops. This kangaroo is about the size of a dog, with a black face and a long dangling tail. They feed on fruit and flowers as well as the leaves of various trees.

About 6km from the park is Lake Eacham, a volcanic crater lake with very clear water. A scenic drive through rainforest takes you there, where you’ll find the rainforest comes right down to the water’s edge. A walking track goes right around the lake, and there is a picnic area with toilets, barbecues and changing sheds, and a large parking area. At various spots around the lake you can see the amazing anal-breathing saw-shelled turtle. This creature’s ability to breathe through its bottom allows it to stay underwater for long periods.

A little north of Lake Eacham is Lake Barrine, another crater lake with a walk around the perimeter. A feature of this walk is the twin kauri pine trees that are over 1000 years old. We also saw a huge amethystine python on our walk. You can take a 45min boat cruise around the lake, and eat at the historical teahouse at the water’s edge.

Put both crater lakes on your agenda.

All the Tablelands attractions are within reach from Yungaburra. Atherton is only 12km to the west, and this is the service town for the area, with supermarkets, a fuel outlet and many other shops and tourist attractions. Mareeba is the other main centre in the district, about a half-hour drive north from Atherton, while the waterfall circuit is half an hour’s drive to the east.

The Curtain Fig Tree is only 3km from town, and is a must-see. Years ago, the host tree of this strangler fig fell over, causing the cascading roots of the fig to hang down over 15m to the ground. The roots cover a massive area; this is certainly the most impressive fig we have seen. Continual walking around the tree over the years was damaging the roots, so a boardwalk has been erected around the tree to protect it.

The historic Peeramon Hotel is about 5km from Yungaburra, and it’s well worth calling in for a drink or meal. The old pub was damaged by Cyclone Larry, but the facade and most of the building is in its original state. Check out the old hand petrol pumps, and the great view from the balcony of lush green pasture.

About 17km south of here is the Nerada Tea factory, where there are tours and a cafe. You may also see the tree-climbing kangaroo here, as they live in the trees surrounding the factory.