With a strong family history of running pub's throughout Queensland, Denyse's great-grandma having built the historic Federal Hotel in Bakerville near Herberton, Qld, in 1890. Denyse's grandmother ran the hotel until she passed the licence back in 1960. Hence both Denyse and Tony have an interest in historic pubs, and have written about several, including the Lion’s Den Hotel near Cooktown, the Daly Waters pub, NT, and the Middleton Hotel near Boulia, Qld.

The Nindigully pub is 45km south of St George, Qld. It is reputedly the oldest continually-licensed pub in Queensland, being first licensed when it was constructed in 1864.

Across the road from this historic pub is a very popular free camping area, which extends along the Moonie River for a long way. A well-known fishing spot in the area, that’s great for catching yellow belly and red claw crayfish. 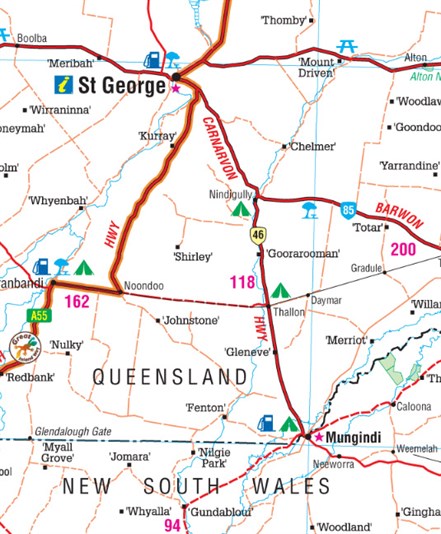 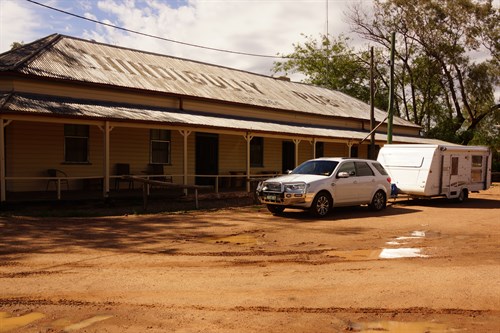 Campers are welcome to use the toilets and showers provided by the pub at no charge, and we heard the local council was going to build more toilets and showers there later this year. The Allsop's have heard from many caravanners over the years about what a wonderful time they had camping near the old pub.

This iconic pub was a Cobb & Co coach staging post from the late 1880s until the early 1900s. It is still in close to original condition, although some fibro walls have now been replaced with timber. Like all good renovations, the eye is not drawn to the new areas. The original sawn timber walls remain and are a nice feature.
Manager Debbie Lee kindly showed Tony and Denyse around, pointing out interesting aspects of the building.

Accommodation is available in the pub, with a dormitory-style room for those who have had too much to drink, as well as private rooms, all kept in the style of days gone by. Lunch and dinner are available every day, and the hotel is known for its giant hamburgers, particularly the 5.7kg ‘road train’ burger!
The bar walls are adorned with the biggest collection of ringers and cow cockie’s hats we have seen. Take some time to read the captions under the hats, settle down with a beer and check out the other items in the bar. The heads of a huge boar and a goat have pride of place above the bar. The glass water dispenser (circa 1888) on the bar is another feature.

The Moonie River is across the road, about 100m away, and a concrete walking track has been laid along the banks for campers, but some of it was underwater when we called.
There was room for about 10 caravans near the pub, but it was too boggy to go further along the river banks. I would imagine this would make an ideal camping area during the caravanning season, when the river was not flooding.
The pub had its 150th anniversary in July and a sesqui-centenary celebratory weekend was held in October. The pub also holds several events during the year, including the Nindigully Pig Racing late in November.
Over the years, this old pub has had many owners but we were pleased to see it is maintained in close to original condition. Sitting in the old bar, letting your mind wander, it is not hard to imagine some of the scenes it has witnessed.