Prepare Your Rig For The Kimberley

Jayco is wisely guarded when it comes to the job description of its Outback spec models.

“Jayco’s Outback range has the added strength and clearance you’ll need for rugged conditions, but there are limits,” the brochure warns. “It’s best to use your Expanda as a base station and head into rougher terrain without anything under tow.”

By any broad definition, “Australia’s vast network of unsealed roads”, for which Jayco says the Expanda Outback is built, should include the Oodnadatta Track, the Tanami Road and, of course, the Gibb River Road. These major trunk routes, which trucks and other transport vehicles travel on a regular basis, allow access to iconic inland destinations. That’s how we decided where, and where not, to tow our 17ft (5.2m) 16.49-3 OB Expanda, with our four-cylinder 2.5L turbodiesel Nissan Pathfinder.

The weather and road conditions we encountered in late-May and June were in our favour. The corrugations were less pronounced and the many creeks and rivers we crossed were lower than expected thanks to the hard work of the graders that smoothed the road ahead of us at the outset of the touring season.

But that doesn’t mean it was all smooth sailing – far from it. As we pushed the envelope of Jayco’s job description for the Expanda, our rig was given a serious workout over the 10,330km we covered in five weeks – nearly 3000km of it on unsealed roads ranging from good, high-speed clay and fine gravel to savage corrugations and bulldust. We’re the first to admit that this is far from the typical terrain most Expanda Outback owners will experience.

Even though half of all Expandas are now ordered in Outback spec, relatively few of them spend quality time off the bitumen. This is largely true, too, of the ‘offroad’ models of most mainstream caravan manufacturers. The gleaming rows of spotless white rigs in the major caravan parks off the Stuart Highway attest to this.

Many people either can’t afford, or just aren’t prepared, to risk their expensive rig as well as the harmony of a major trip by tackling such roads.

That said, Expanda Outback owners should be confident in the knowledge that if they want to venture further, they can.

The Oodnadatta Track from Lyndhurst (where the bitumen runs out), to Oodnadatta, SA, was in excellent condition when we drove it, thanks to the graders that had worked it relentlessly since the heavy rains of March and April. The road was almost like a highway, with comfortable cruising at 80km/h possible for much of the time. But the 200km stretch of road from Oodnadatta to Marla, where it joins the Stuart Highway, was a different story. In addition to being much narrower in places, the road was quite rough and rocky.

WHAT WORKED
Our Expanda proved to be a solid and very comfortable base from which to explore one of the most remote parts of Australia. The way the Expanda endured the creek crossings and corrugations that were well beyond its job description was most impressive. No major component failed.

The thicker, stronger galvanised chassis and A-frame, tough Al-Ko Outback leaf springs and shock absorbers, and beefy 15in alloy wheels with Pirelli Scorpion 235/75R15 light truck tyres were all untroubled by the often horrific roads. The Expanda felt as structurally tight after 10,000km as it did when we took delivery.

It’s all very well to say “travel slowly” in order to minimise damage, but the reality is that the severe corrugations we encountered on a section of the Gibb River Road near the Kalumburu turn-off, on the Fairfield-Leopold Road that leads to Windjana Gorge, and on the 23km detour off the Tanami Road to Wolfe Creek, could only be taken at two speeds – less than 15km/h or more than 65km/h. We chose the latter. It felt easier on the rig as we skipped over the top of the corrugations.

However, this choice also brought the occasional jarring thud as we hit a bulldust hole or had to brake unexpectedly for a rut, grid or other obstacle. We were constantly in awe of the punishment the Expanda took without major complaint. We spoke with a number of owners of more expensive ‘offroad’ caravans travelling at slower speeds who reported broken shock absorber mounts and other issues. The Expanda, like all Millennium-chassis Jaycos, is tough where it counts.

The constant hammering on the Gibb River Road, and later on the Tanami Road on our way home, also took its toll on a number of minor fittings and fixtures, but nothing that hindered our trip or caused us to change our game plan.
In hindsight, with better personal preparation many of the things listed below might not have occurred. Next time. 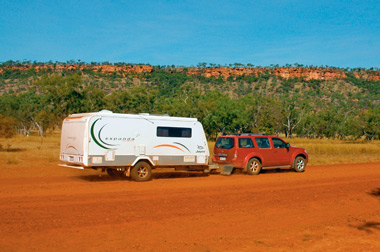 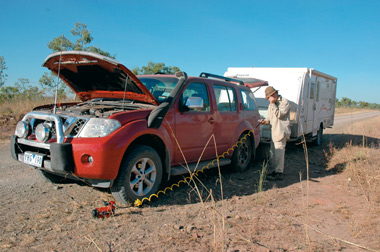 WHAT DIDN’T WORK
The twin 82L water tanks fitted fore and aft of the axle had adequate shielding, but their rubber outlet hoses and the twin plastic grey water pipes (from the shower and sink) that exit the offside of the van were in the crosshairs of wayward stones. Our solution was to wrap the pipes with shade cloth held in place with zip-ties.

Despite our Rock Tamer mudflaps acting as a second line of defence, wayward stones found their way onto the Expanda’s largely unprotected ‘face’, pock-marking the gel coat. The outer rim of the van’s spare wheel (mounted under the A-frame) was also affected.

The exposed twin gas cylinders were vulnerable, too, but our concern here was principally the regulator and the rigid copper pipes feeding each bottle. They withstood the trip without incident, but we would’ve preferred to see flexible braided gas lines used.

There’s clearly a market going begging for Jayco to offer Expanda owners an aesthetic Jayco-style stone protection solution. We’re sure the take-up would be high even among owners who didn’t plan to take the roads we did.

While convenient, the van’s low-slung step was a little vulnerable to rock and roadside-obstacle damage. Each day, stones lodged between the step and the carrier, jamming it closed. A solution would be for Jayco to simply omit the step from Outback models and supply a portable plastic step instead.

We lost one pad from a front Al-Ko corner stabiliser on the Oodnadatta Track. Also, a rear stabiliser was damaged on the corrugations of the Tanami Road when it dropped. This probably occurred because it hadn’t locked properly due to a build-up of grit and mud – so it could’ve been our fault.

We also found the Expanda’s optional slide-out barbecue a bit awkward to use, as the bayonet gas fitting was exposed to dust and was difficult to engage without lying on your back underneath the unit.

The Gibb River Road also took its toll on some interior hardware, including the small plastic latch on the ensuite door (although the extra security lock held the door shut, as intended), and the fridge and microwave doors tended to open and empty their contents onto the floor.

The mixer handle on the shower and main sink tap became unscrewed on the Gibb (as did three jars of Nescafé – keep your coffee in a sealed plastic bag to avoid a ‘brown-out’) and were damaged.

Yet the Expanda’s optional 19in television, as well as its swivel mount and wind-up aerial, held together and worked perfectly without any special care or attention (it had been suggested that we remove the TV from its bracket and wrap it in a blanket on rough roads, but it all became too hard).

Our final issue with the interior was the sharp edges on hinges and cupboard latches. The handles do a great job of keeping the cupboards closed, but having these smoothed off would prove a small but appreciated refinement.

Memories of the blood-orange oxide that characterises the Kimberley remain with you for a while, sometimes involuntarily. No matter how expensive your rig, the fine red dust will almost always find its way in.

We inspected some serious offroad rigs during our trip that had issues on this front. The Expanda ingested its fair share, too, most if it around the rear bed (a second side latch on the drop-down rear bed base might have made a difference), but also in the lower cupboards rear of the axle. The dust in the lower cupboards found its way in through the vents that allow the fridge and hot water service to ‘breathe’.

THE VERDICT
If this all sounds like a tale of woe, you’re not really seeing the big picture. The Expanda is a well-conceived and solid van that in Outback spec confidently handles roads that it was probably never meant to travel.

The things that didn’t work were, for the most part, minor items and an hour or so in a caravan workshop would have rectified most of them. Alternatively, and even better, a few hours spent in advance of the trip would have headed most of these issues off at the pass.

We have no hesitation in recommending Jayco’s Expanda in Outback spec as a good all-major-roads pop-top for outback vanners. Just prepare carefully, choose your roads and the time of the year to travel, and you’ll return smiling – as we did.