Travel: On The Plenty Highway, NT

Chris Whitelaw — 25 August 2022
The stunning scenery of the Plenty Highway will make you immerse in the many cultural and historical points of interest along the way.

The Plenty Highway (State Route 12) stretches 498km from the Stuart Highway, 68km north of Alice Springs, to Tobermorey Homestead on the Northern Territory/Queensland border. The highway takes its name from the Plenty River, an ephemeral watercourse that runs north of and parallel to the road for almost 200km, but is not generally seen by travellers until they cross it near Jervois Station.

This mostly unsealed road traverses some of the Territory’s most remote and scenic landscapes, steeped in Indigenous culture and pioneering heritage. Though perhaps not as popular, or forgiving, as the Barkly Highway further north, the Plenty draws increasing numbers of Outback adventurers for its beguiling red soil plains and stunning mountain vistas.

As outback roads go, the Plenty isn’t too bad. The highway is sealed to Atitjere (Harts Range) and thereafter is an unsealed mix of firm gravel and loose red dirt. Despite regular maintenance and some upgrades, there are long stretches of bulldust, pot-holes, corrugations, and rough, gnarly fords over dry watercourses. It is essentially a dry weather track, prone to flooding, and is often impassable after heavy rain. 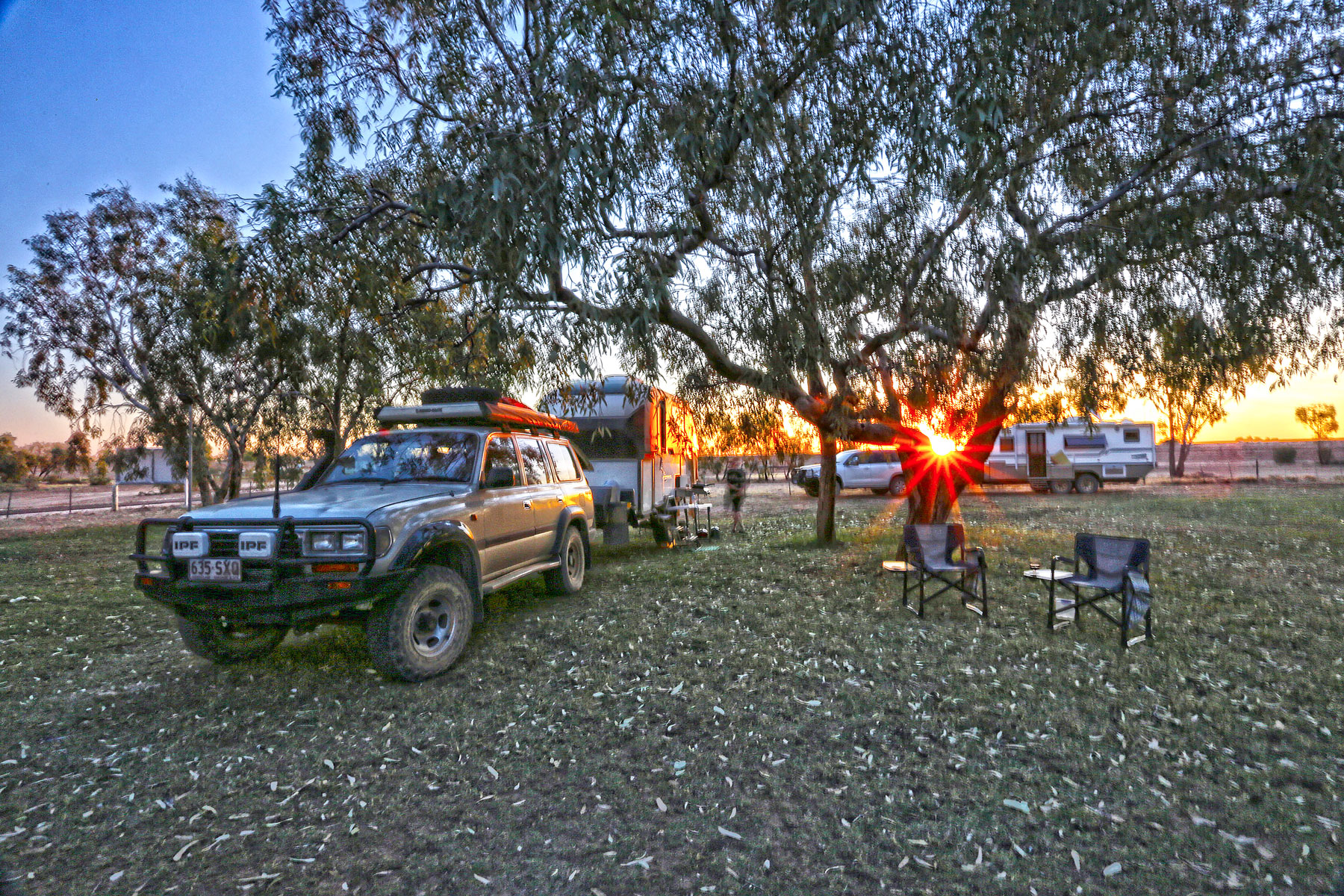 The Plenty region encompasses the traditional lands of the Eastern Arrernte, Alyawarra and Anmatyerre Aboriginal people, with a history of continuous occupation dating back at least 32,000 years. The ranges are dotted with numerous locations of cultural significance, including artefact scatters, quarries where quartzite was extracted to make stone tools and sacred sites adorned with rock art  and petroglyphs. Modern descendants of these first inhabitants maintain strong ties with their Country. Some live in isolated outstations, while the Atitjere community at Harts Range is home to about 450 people, with a Central Land Council office and an active art and cultural program.

The first European to explore the Plenty’s region was Englishman Henry Barclay, tasked by the South Australian government in 1878 with surveying the lands to the north-east of Alice Springs between the Overland Telegraph Line and the Queensland border. Along the way he named the Plenty, Marshall and Hale Rivers, Arthur Creek and the Jervois Range.

Barclay’s reports of abundant grass on the plains and water from wells dug in the dry river beds attracted pastoralists during the early 1880s. Regular droving along a route that roughly followed the present-day highway led to the establishment of cattle stations on both sides of it during the 1890s-1920s. In most cases the pastoral runs survived with the use of Aboriginal labour, whose intimate knowledge of the country proved invaluable.

The discovery of copper ore in the Jervois Range and mica in the Harts Range in the late 1920s gave impetus to small scale mining and the development of the old stock route into a road capable of taking ore trucks and road trains of cattle. In 1966, the road was named the Plenty Highway and has since been upgraded a number of times, with the long-term goal of sealing the entire route with funding from the Australian and Territory governments.

Seventy kilometres from the Stuart Highway, the Plenty Highway arrives at the Gemtree Caravan Park on Gillen Creek. Gemtree occupies a 100ha parcel of land that was formerly part of Alcoota Station. The caravan park was established in the 1980s as part of a tourist enterprise on the local gemfield to manage the increasing number of fossickers camping on the station. After the station was sold to the Central Land Council for the Traditional Owners, the eco-business was purchased by Cameron and Carmel Chalmers, fourth-generation Territory pioneers, and is now managed by their daughter Kate and her husband Aaron McMaster.

The caravan park offers drive-through powered and unpowered sites scattered among a natural bush setting, all within easy walking distance of the amenities block and laundry. On-site caravans and tents are also available for hire. The village store sells fuel (ULP and diesel), ice, takeaway food and basic grocery items, and adult beverages can be purchased at reception after midday. The Billabong Bar is a community watering hole three nights a week, with a paddymelon bowls tournament on Friday night. ‘Kate's Campoven Kitchen’ (winner of the Central Australian Tourism Award for New Tourism Innovation in 2010) offers roast dinners on Wednesday and Saturday nights. 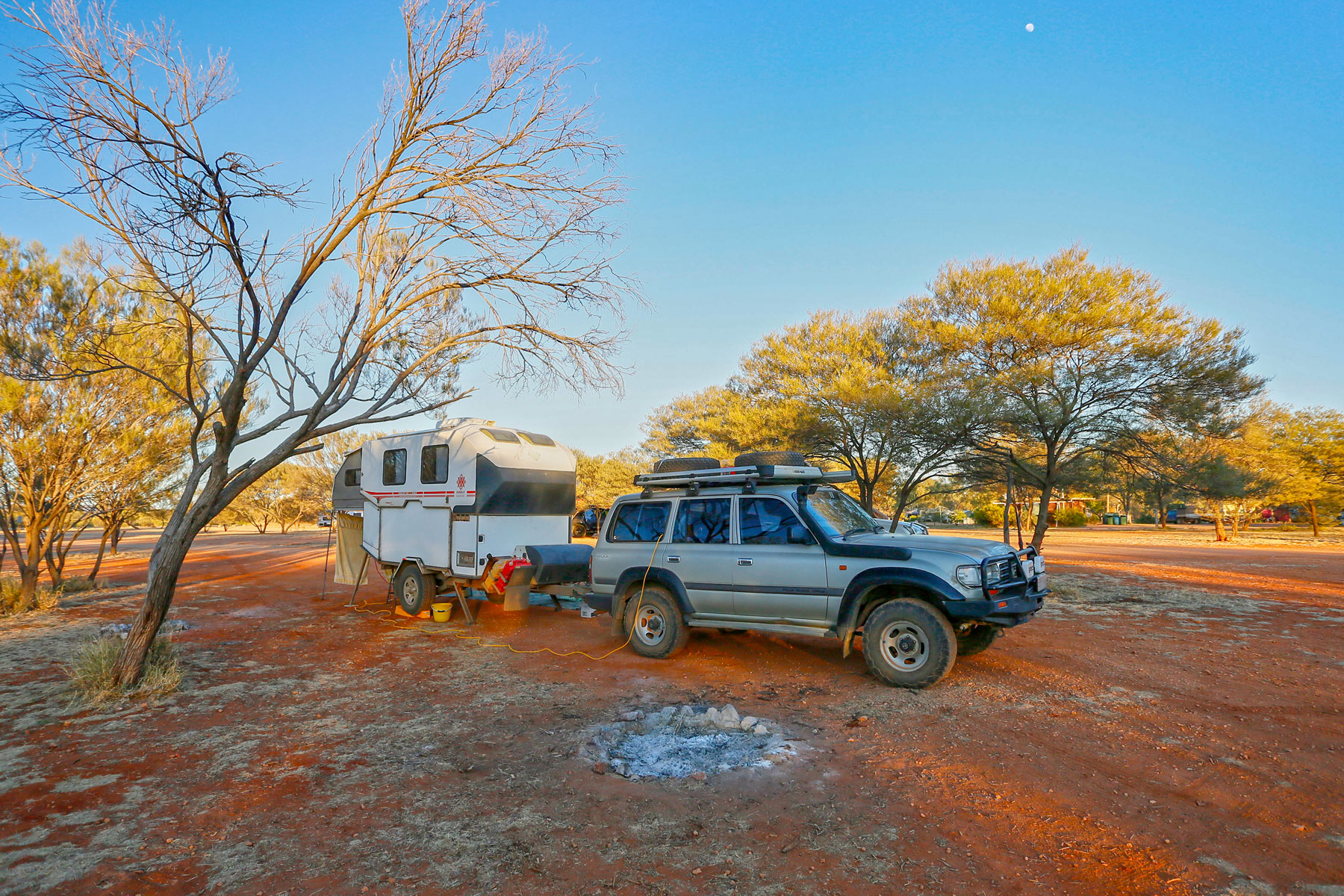 But it’s not all beer-and-skittles. A 3.5km nature trail meanders around the property, through mulga bushland and along the sandy bed of Gillen Creek. A booklet from reception is a handy guide to the local flora and fauna. Some of the nearby gemfields can be explored on the park’s tag-along garnet and zircon fossicking tours. The tour cost includes equipment hire, an experienced guide to show you how and where to fossick successfully, and the appraisal of your stones by an expert gemologist back in the Gem Room. The park’s crystal-clear swimming pool is a great place to refresh and relax after a hard day at the diggings. For history buffs, a museum is housed in the original Mount Riddock Homestead (c.1930) that was dismantled and rebuilt on Gemtree in 2012. Gazetted in the Northern Territory Heritage Register in 2016, the timber building is a good example of construction techniques of its time and contains informative displays on the development of the region’s pastoral industry.

As the highway unfurls beyond Gemtree, the dark red-ochre peaks and ridges of the spectacular Harts Range begin to fill the southern skyline, dominated by Mt Brassey (1203m) and Mt Palmer (1136m). This rugged landscape is the product of volcanic activity and immense tectonic forces spanning almost 2,000 million years. The range’s slopes are cloaked in mulga woodlands, creek lines are fringed by tea tree and river red gums, and the foothills flatten to a red soil plain dotted with ironwood and tufts of kerosene grass. Mica mining began in the Harts Range during the late 1880s and continued sporadically until the 1960s. In 2016, the Harts Range Garnet Project commenced mining the world’s largest alluvial garnet deposit in the floodplains of the Plenty River south of Atitjere, but was unable to sustain profitable production and closed in 2019.

The central Harts Range around the abandoned mica mines of Mount Palmer is popular with amateur fossickers for a range of gemstones, including zircons and garnets. Fossicking is also permitted in designated areas within Mt Riddock Station, with bush camping at the Spotted Tiger campground, near the entrance to the fossicking area.

The hamlet of Harts Range, largely comprising the regional police compound, sits on the highway 28km east of the Mt Riddock turn-off. A short distance away, the Indigenous community of Atitjere offers basic services, including a health clinic and a shop with fuel and takeaway food. One of the settlement’s most popular events is the annual Harts Range Horse Race at the local racecourse on the first weekend in August. First held in 1946, the event is part of a 3-day Bush Sports Festival that includes a rodeo, novelty events and a ball. 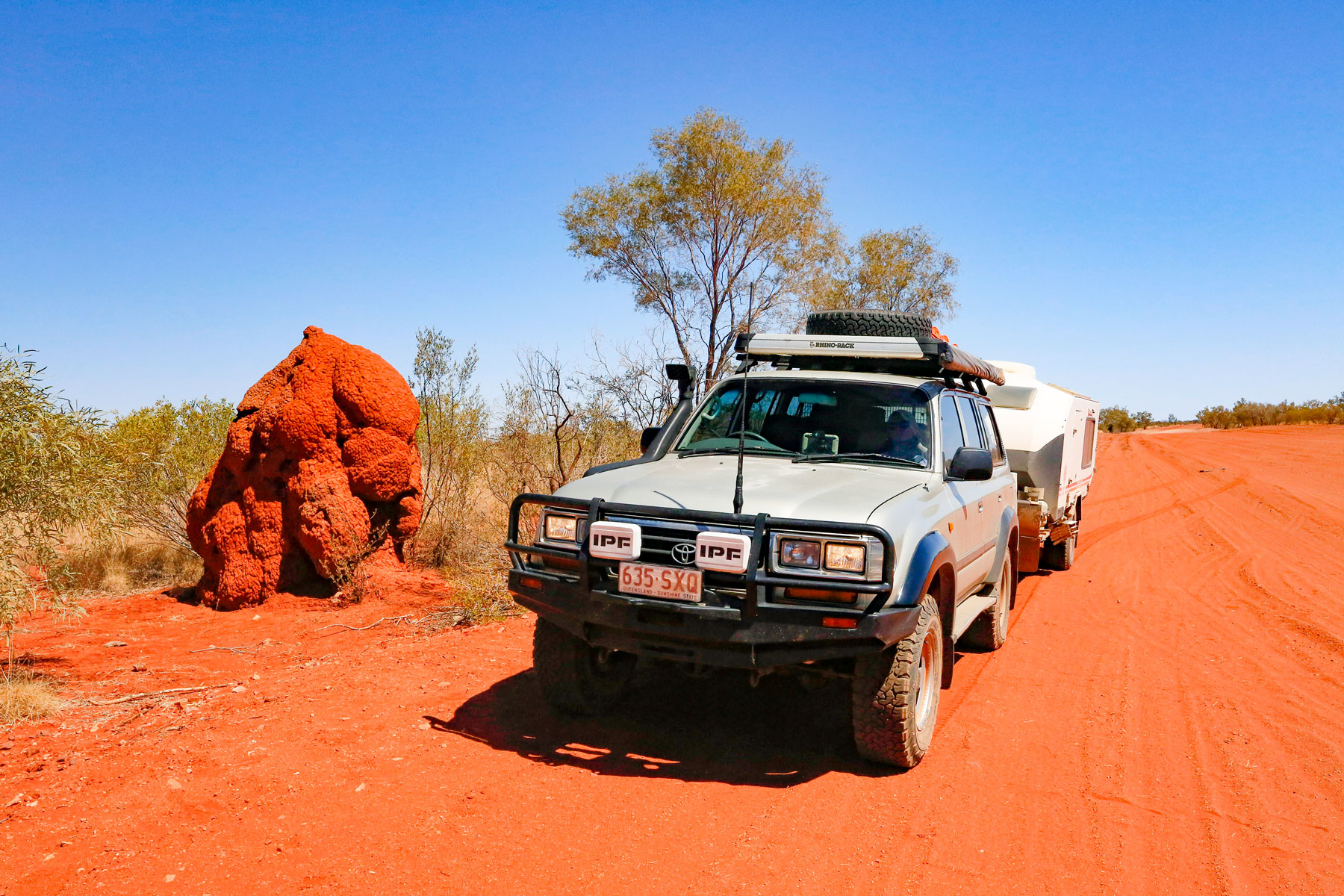 Off the beaten track

Twenty kilometres east of Atitjere, the Binns Track branches north to a brace of attractions that would justify the detour for a couple of days’ remote adventuring. The first is the Boxhole Meteorite Crater, 37km from the highway. Discovered in 1937 by a shearer from Boxhole Station, the crater measures 178m in diameter with a rim rising 10-17m above the crater floor. It was created about 5,400 years ago when a meteorite exploded on impact, showering the surrounding landscape with nickel-iron fragments. The largest of these was a metallic mass weighing 82kg, which is now in the Natural History Museum, London.

Further north, the track comes to Tower Rock and the Mac and Rose Chalmers Conservation Reserve. The 470ha reserve was once part of the MacDonald Downs pastoral lease, acquired by the Chalmers family in 1923 to run sheep. Encompassing Tower Rock and the grave sites of Mac and Rose, the reserve protects some striking granite rock formations and a diverse range of plants and animals that live among them. Basic bush camping with minimal facilities is available for those who are self-sufficient and well-equipped. The Reserve is managed out of nearby Mt Swan homestead, which has a small store and art gallery, and offers B&B accommodation for visitors.

Seventy kilometres east of the homestead lies the Dulcie Range National Park, spanning 191sq km of the southwestern Dulcie Range. The Range is a rugged plateau of 350-million-year-old sandstone rising between 50-150m on a rim of steep-sided cliffs heavily dissected by deep gorges, rocky watercourses and scree slopes. The gorges shelter permanent waterholes that are vital refuges for wildlife in this arid environment. Archaeological surveys attest to a large, semi-resident population of Akarre Arrernte people, with 100 rock art sites and numerous other locations of cultural importance.

The Park also contains evidence of early pastoral activity, including the remains of Old Huckitta homestead (c.1920), a wagon shed, blacksmith’s shop and stockyard. The park offers no facilities for visitors except for a pleasant bush camp near the old homestead and a nearby gorge with a reliable supply of water.

Jervois Station is a prominent waypoint where the highway crosses the Marshall River, 130km east of Atitjere. The Marshall trends generally east-west and is fed by several creeks that drain from the Dulcie and Jervois Ranges. Downstream from the station, the Marshall runs into dune country of the northern Simpson Desert, where it evaporates in a series of salt lakes. In a region that receives a meagre annual rainfall of only 250mm, these creeks and rivers are usually little more than sandy channels. But when it rains in earnest they flow strongly and the Marshall will cut the highway.

Although the Jervois Ranges were explored by Henry Barclay as early as 1878, the 2,736sq km station wasn’t formed until 1960 when the lease was taken up for grazing cattle. Today, the station offers travellers accommodation in ecolodges or bush camping in a shady area beside the river, with amenities that include toilets, showers and water. Fuel (ULP and diesel) and snacks are also available from a small shop.

A free overnight camp spot is located on the highway near the river crossing, with a water tank and sheltered picnic table. Just south of the homestead is the access track to Batton Hills Camp, and the Hay River Track which heads south into the Simpson Desert, joining the main east-west route across the desert near Poeppel Corner. East of Jervois Station the countryside changes. The rugged ranges are replaced by isolated low hills that rise from broad flat plains of red sandy soil etched by ephemeral watercourses. Stretching to the horizon on both sides of the highway, the landscape is dominated by mulga scrub with sparse patches of mallee and native grass, and river red gums lining the gullies.

Near the Queensland border, a signposted track diverts to Tobermorey Station, the last waypoint on the Plenty Highway. Tobermorey has operated as a cattle station since 1910 and is capable of carrying 15,000 head across its 6,000sq km of prime Mitchell grass country. Adjacent to the homestead is an open grassy area dotted with shade trees that provides an oasis of powered and unpowered camping, as well as cabin accommodation, with good amenities. A small store is stocked with basic food items, and fuel (ULP and Diesel) and tyre repairs are available by arrangement at reception. Beyond Tobermorey, the road enters Queensland’s Channel Country and continues for 248km as the Donohue Highway to Boulia, and ultimately Winton on the final leg of the transcontinental Outback Way. Alternatively, if you’re heading towards the Tropics, the Urandangi Road heads northeast from Tobermorey for 280km to Mt Isa, with unlimited options from there.

For more information on things to do and see along Plenty Highway, visit Central Desert Regional Council