Should you choose a Lightweight Caravan?

John Hughes — 25 July 2022
There are a lot of advantages to smaller vans if you are prepared to embrace a more minimalist approach to travel.

We often review pure on-road tourers, hybrid vans and conventional offroad vans. One thing they all have in common — they are all compact in size for their given style. Let’s explore why you could consider a smaller van, depending on the style of travel you envisage.

How will I really use the van?

Do you just like the idea of heading off into the outback, or are you really going to do it? If the truth is that you’re going to stick to sealed roads, a pure on-road tourer might do the job for you. If you are not venturing out into the sticks, you are more likely to be using caravan parks which means you really don’t need to bring as much stuff like food or water because you can get it as you travel. You also don’t have to carry a whole lot of paraphernalia like recovery gear, a garage full of tools, spare fuel and lots of spare wheels. When you think about what you don’t need to carry, you may decide a smaller on-road tourer is more than enough for you.

A road tourer — particularly a small one — doesn’t need a heavy-duty undercarriage because it doesn’t have to support much weight, carry a big payload, or withstand extended travel on corrugated roads. This means huge amounts of weight can be saved with much lighter construction chassis, smaller wheels/lighter tyres and less-complex suspension systems. (Check out the reviews on the Roma Miniline and the Little Gem Weekender) If you really want to go bush, then you should consider that a smaller, lighter van will allow you to visit more places. Sure, the trade-off is some living and storage space, but there are significant advantages. An offroad style van will be heavier because you need a more heavy-duty undercarriage, and you will inherently need to carry more stuff than an on-roader. However, weight is generally your enemy offroad. A light van is less likely to cause traction problems for your tow vehicle in steep or slippery environments. Length doesn’t help offroad either. Shorter vans are less likely to hit the ground at their extremities when travelling over bumps and dips. The easiest way to save weight with an offroad van is simply to go for a smaller van. Clearly, a smaller or narrower van weighs less because there is less chassis, body and furniture. On top of that, smaller vans are more likely to be single axle which can save hundreds of kilos compared to duplicating another set of wheels, brakes, axles and suspension with a twin axle. A kind of ‘forced saving’ is that single axle vans generally have lighter payload limits, which means you’ll need to be more disciplined with your packing. It’s also worth noting that if you do have a twin axle van with a bigger payload, you don’t have to use it all to save some weight. There is a caveat that some suspension systems perform sub-optimally if they are underloaded.

In addition to simply going small, some manufacturers look to save weight using contemporary materials such as aluminium, composite panels or fibreglass. This applies to all vans on review in this issue.

How long will I travel for at a time?

If you are doing the Big Lap, then you may find that the space of a larger van will be more worthwhile. However, if you are only getting away for weekends or the occasional longer trip, then a compact van is more likely to have enough space for you to live with. 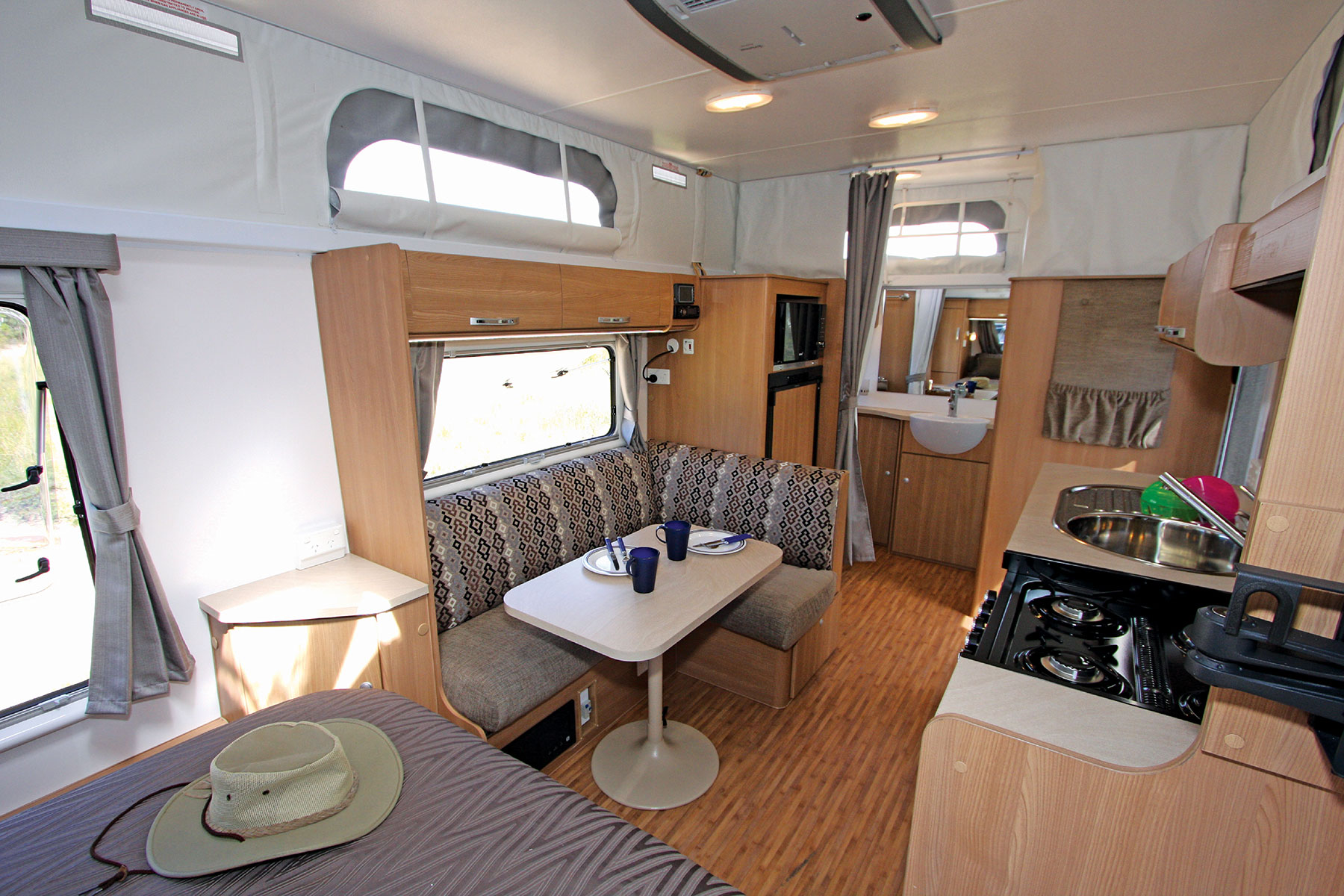 Which tow vehicle do I want to use?

You may have thought caravanning was out of reach for you due to the need for a big 4WD tow vehicle. Compact units such as the Little Gem Weekender and the Roma Miniline smash that notion to smithereens. These examples are capable of being towed by regular hatchbacks and small to medium SUVs respectively. Importantly, they also bring electric vehicles into the mix.  And if you did choose to tow this style of van with a 4WD you wouldn’t have to worry about the ‘tail wagging the dog’. When you look at the lighter off-roaders, the Titanium and Mountain Tail single axle offerings on review both deliver an ATM of 2800kg. In my view, this spec is a real sweet spot for pairing to most twin cab utes with so-called 3500kg tow ratings as it gives you plenty of room to play with.

As we have regularly documented, ute manufacturers are often unrealistic with their gross combined mass ratings. It is a common occurrence to take a van that is rated with a 3500kg capacity, load it to its legal limit, then take the ute and load it to its legal capacity. The problem is, when you add the weights together you exceed the tow vehicle manufacturers' gross combined mass limitation. Hence my fondness for a single axle van coming in at a 2800kg ATM. Similarly, the twin axle Swag hybrid (3100kg ATM) on review in this issue also provides a pretty good buffer for 3500kg tow rated utes.

In the current fuel-sensitive environment, we’ve also got to throw in a lighter van is going to be a more cost effective and green solution no matter what kind of vehicle you choose. If you are using an older towing vehicle with less-advanced safety features there is a good argument that a smaller, lighter van will give you a greater margin for error if anything goes wrong. This is because lighter vans take less time to stop and are more controllable in a sway event. The same arguments apply if you are a less experienced tower as you will have a greater margin for error for staying out of trouble with a lighter van.

There’s a lot to be said for smaller, lighter vans. If you stick to bitumen roads and do short stays, there are some incredibly lightweight vans on offer capable of being towed by passenger cars. If offroad is more your style, staying relatively compact and light will make challenging conditions easier and give you a good margin for pairing up to twin cab utes.

JUST HOW MUCH CAN MY VEHICLE TOW?

POWER MANAGEMENT FOR YOUR RV PART 1