Calculating Battery and Solar Capacity for Your RV Part 2

Malcolm Street — 13 July 2022
Being equipped with batteries and solar panels means staying off the grid is feasible but for how long?

Batteries are slightly deceptive devices. The Amp-Hour (Ah) rating is mostly used to compare batteries, rather than as an indication of effective capacity.  Take a 100Ah battery, which is the standard rating in many caravans as an example. Theoretically, the battery could supply 5A for 20 hours, 10A for ten hours or any mathematical combination which equals 100 -- but in reality, it doesn’t quite work like that.

What happens is that as the battery’s level of charge drops, so the does the voltage -- and once the battery capacity drops below 30 per cent, some devices like water pumps and fridge compressors may not work well.

In addition, many battery manufacturers recommend that for maximum life, a lead-acid AGM  battery should not be used regularly below 50 per cent of its capacity. However, that’s a bit of an economic judgement call because buying, stowing and hauling an extra battery are considerations too. 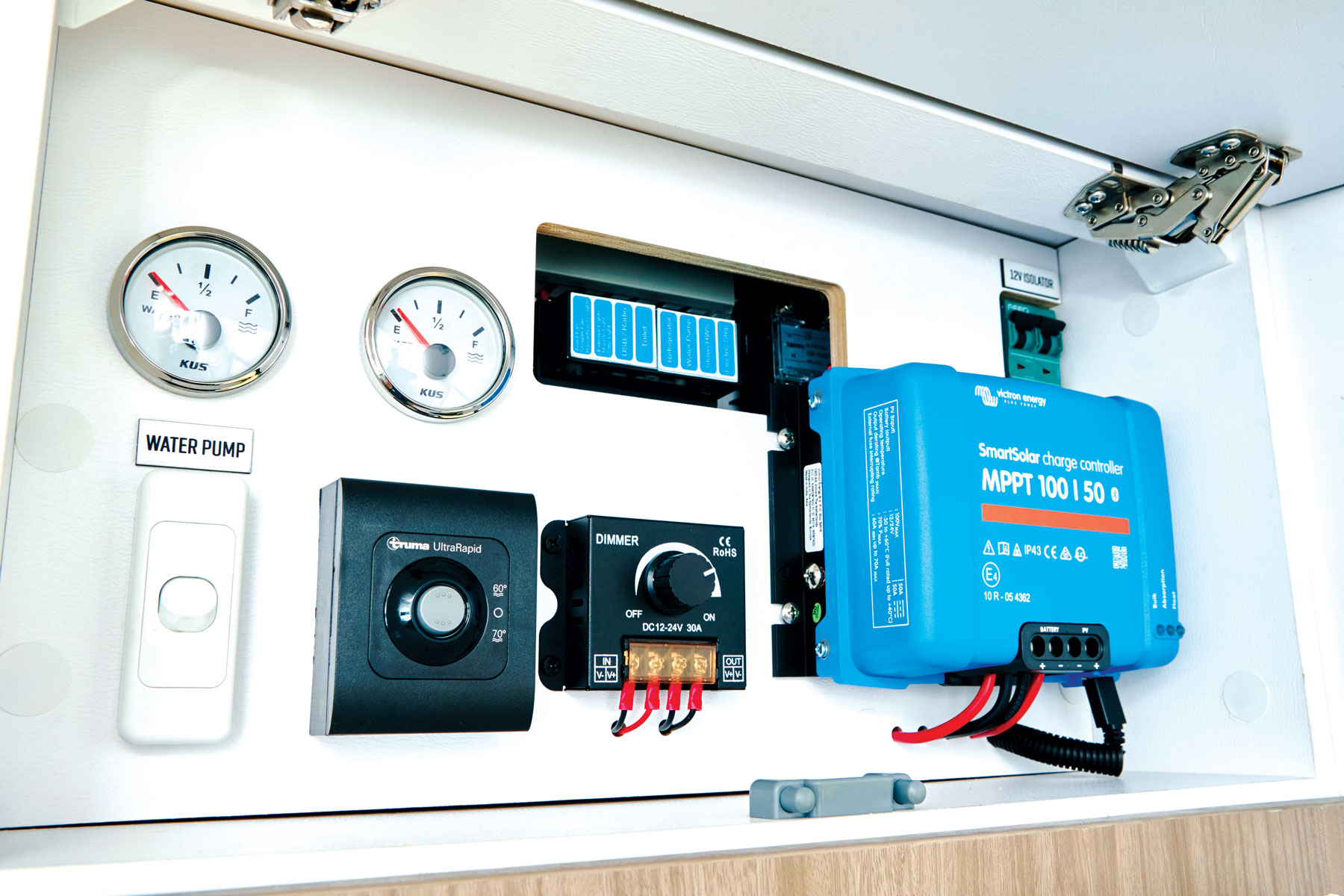 Lithium (LiFePO4) batteries have different properties. For much of the discharge cycle, the voltage remains constant until it’s down to about ten per cent of its capacity. Then the voltage drops sharply and it’s time to either switch off or recharge, because fully discharging the battery will put the battery in sleep mode – it’s protected by the BMS.

Calculating what battery capacity is required isn’t complicated but does need some thought, because there are several variables. Probably the most difficult part of the equation is establishing the power ratings of various devices. Maximum load isn’t a simple case of addition either, because very few devices are used all the time; in the case of a water pump, it’s just in brief bursts. For these calculations, we’ve used Amp hours rather than Watt hours to simplify things, but it should be borne in mind that Amp hour figures can vary slightly, depending upon the state of the battery’s charge and voltage.

1. An RV with an absorption fridge (on LPG) and using AGM batteries.

2. The same example, but with a 150 litre 12V compressor fridge, still using AGM batteries. Fridge electrical load is tricky thanks to variable, like external temperature, how full it is and how frequently the door is opened and closed. For example, Bushman fridges are probably one of the most energy frugal fridges on the market, consuming around 1 amp per hour over a 24-hour period.

3. As per above, with lithium batteries, a 12V compressor fridge and an air conditioner as well that would have to be run via a 12VDC/240VAC inverter. Like the fridge, an average was applied because air conditioners have varied efficiencies.

Air conditioners are tricky and calculating power-use depends upon their size. For example, a 2,000W (2kW) unit consumes around 2000/12 = 150A – the maximum depending upon how much it cycles on and off.

Assuming a 100Ah AGM battery and a maximum 50 per cent discharge, that’s 50Ah and adequate for the estimated 28.64Ah load.

Solar panels are generally rated in Watts (power), a product of voltage (V) times current (1). Take a single 150W panel as an example. As noted in part one of this article, the real output is something less than that, depending upon whether it has a PWM or MPPT regulator. Using a PWM regulator, the output is 150W times 70 per cent, or 105W. Another factor to consider is the available sunlight, which depends on location and time of year. On a given day, the average sun hours for Sydney, Adelaide and Perth are 5.1, for Brisbane 5.4 and for Melbourne 4.7. Panels need to be aligned correctly to the sun: for maximum power output the optimum position for solar panels needs to be around 30 degrees to the horizon. That varies according to location, but 30 degrees is a good average. Most vans and motorhomes have panels flat on the roof - generally the most practical but not optimal for performance. Shading is also something to consider.

Thus in Sydney, the calculation is 105W times 5.1 which gives 535 watt-hours of solar output or 535W divided by 12V, giving 45Ah. With the anticipated load (28.64Ah) and the desired battery output (50Ah), it’s looking good for the first example and with power to spare.

If there’s no sun and the battery does not get charged some other way, then a simple calculation 50Ah/28.7Ah suggests a battery life of 1.73 days.

Changing things slightly, pair two 100Ah AGM batteries and keeping to a 50 per cent discharge rate, delivers 100Ah - more than enough for the estimated 34Ah load. Using a single 150W solar panel with MPPT regulator and still in Sydney, gives 150W times 90 per cent times 5.1 which equals 1377 Watt-hours or 115 Ah. That may sound like overkill but there’s nothing wrong with excessive solar capacity.

If there’s no sun for a few days, then using the previous calculation, 100Ah and 57.4Ah draw gives a battery life of 1.74 days.

Three 200Ah lithium batteries delivering 6400Ah, which at a 90 per cent discharge rate give 540Ah. Using four 180W solar panels and a MPPT regulator at the same latitude as Brisbane (sun hours 5.4), suggests three times 180 times 90 per cent times 5.4, giving 3499Watt-hours or 292Ah, just under half the calculated load. That could be increased by using a portable 200W panel which can easily be angled towards the sun.

If there’s no sun for a few days, the using the previous calculation, 600Ah capacity and 593.54Ah draw, gives a battery life of just one day - though that’s easily extended by not using the air conditioner.

While this might seem complicated, the basics are not. Manufacturers like BMPRO, Enerdrive, Redarc and Victron or their dealers can all give good advice. It may sound expensive too, but there’s a budget for every situation, from the campers who just want a simple system for occasional off-grid trips away, to those who want the full Monty for extended remote stays while using an air conditioner and a microwave oven. There’s something to suit everyone. Thanks to 12V Guru, BMPRO’s David Bayliss for his advice in the preparation of this article.

POWER MANAGEMENT FOR YOUR RV PART 1

JUST HOW MUCH CAN MY VEHICLE TOW?