Power Management for Your RV Part 1

Malcolm Street — 22 June 2022
Being fully equipped with battery and solar panels means staying off the grid is possible. Knowing a few electrical basics will make it easy.

Electrical power systems in recreation vehicles (RVs) are getting very sophisticated these days. There was a time when if a caravan or a motorhome had a house battery at all, it relied on either a simple mains charger or maybe, in the case of a caravan, a 12V charging supply from the tow vehicle. Those times are long gone. Now an RV may well have two batteries, a roof plated with solar panels, a DC-to-DC charger and an inverter. In some cases, with enough battery capacity to power an air conditioner or microwave oven.

Calculating what sort of battery and solar panel capacity will suit individual needs does require a little bit of electrical knowledge, but as long as the basics are understood, then all that’s required is a calculator. Taking a look at the basics first, it’s a good idea to understand all the components of an electrical system, starting with the essential item underpinning it all. 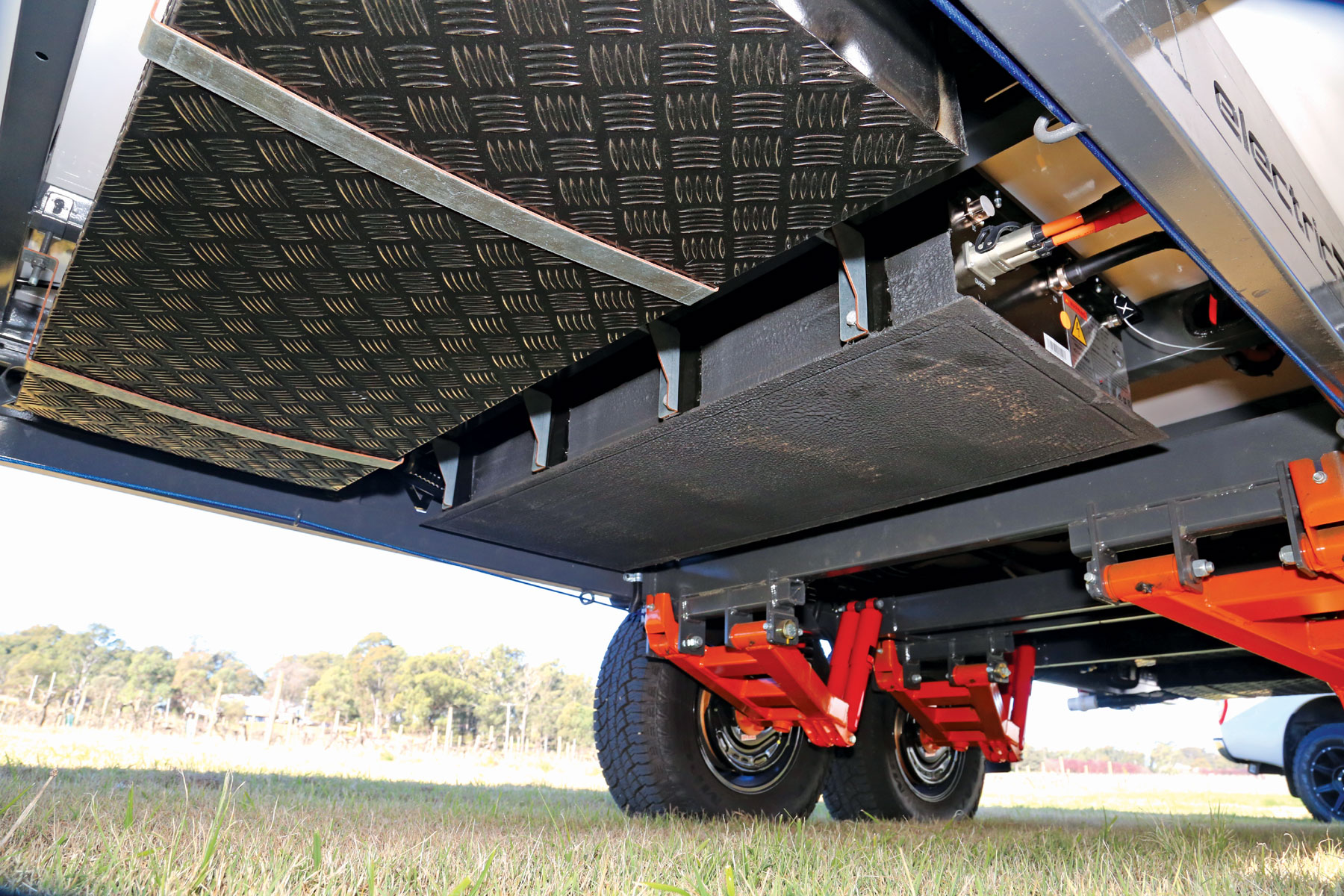 Absorbed glass mat (AGM) batteries were originally developed for the military and have an absorbed glass fibre mat that sits suspended in an electrolyte. AGM batteries are fully sealed and designed to be maintenance free and to withstand mechanical handling or something like vibration on corrugated roads. Compared with flooded and gel cel batteries, the AGM type has the lowest self-discharge rate. It’s not all a perfect world though. AGM batteries are sensitive to heat in locations like under the bonnet of a car but that’s not usually a problem in RVs. Although more expensive than AGM batteries, lithium-ion (LiFePO4) batteries are becoming the first choice for many RV travellers. The prime advantage is that their output voltage remains constant even when down to 10–20% of their charge. For a given output, they are lighter and smaller than conventional deep-cycle batteries. They can also be charged and discharged at a relatively high current. Fitting lithium batteries into an existing system should not be done without considering all other components, like the charger which should have a lithium cycle. Unlike other batteries which can be monitored as a single entity, lithium batteries contain internal electronics to monitor their internal cells to ensure that they are all balanced and charged evenly. Lithium batteries do require a dedicated charger/monitor. Starting with a few basics, older style batteries’ chargers basically worked on the principal of applying a voltage greater than that of the existing battery voltage. For a 12V battery, a voltage of 14.2 – 14.4V was applied. As the difference between the battery and charging voltage was reduced, so too was the charging current. Whist that mostly worked okay, the main problem was that it did not fully charge most batteries.

Enter multi-stage chargers, which are designed to get over that problem. Most “smart” chargers have three stages of charging. The first is the boost mode, which is the initial bulk charge and supplies a constant charging current that increases the charging voltage as the battery voltage rises.

The second stage is the absorption mode, which operates differently to the boost mode in that it keeps the charging voltage constant once it reaches 14.2–14.4V, and slowly reduces the charging current.

Finally, float mode is the stage in which the charging voltage is reduced to 13.6–13.8V and the battery continues to charge slowly until 100% capacity is reached. That does depend on the battery type somewhat and whilst AGM and gel cell batteries will get to 100%, more basic deep-cycle batteries will only reach 90–95%.

Some battery chargers have an equalization cycle that injects a pulsing high voltage to break down sulphation that can occur on the internal lead plates, which then leads to a longer battery life. This sulphation can be caused initially by incorrect charging or leaving a battery unattended for too long. Caravans and motorhomes are ideal for a solar panel installation, although there are some energy losses in being flat rather than pointed more directly at the sun. Installation is a fairly straightforward process but given the characteristics of solar panels, it’s not simply a matter of connecting a solar panel directly to a battery. For a start, most solar panels have an output voltage that is higher than that necessary for battery charging. Secondly, a solar panel output cannot emulate either the multi-stage cycle of an AGM battery nor the constant voltage/constant charge cycle of a lithium battery. A regulator, otherwise known as a solar charge controller, is required to provide the most effective charge to the battery without overcharging. It also prevents the battery back feeding the solar panel when the installation has been correctly configured. There are two types of solar panel regulators - pulse width modulation (PWM) and maximum power point tracker (MPPT) — and both operate differently.

“Caravans and motorhomes are ideal for a solar panel installation”

A PWM regulator operates as it suggests. It pulses power into the battery — it modulates the length of the pulse. If you imagine a simple voltage verses time graph, the pulse looks like a square wave with the voltage turning on and off for a short period of time. Every time the regulator turns off, it makes a measurement of the battery voltage and adjusts the next pulse accordingly. A characteristic of PWM regulators is that the voltage output is just above that of the battery. The large load of the battery causes that effect, and the battery voltage cannot be boosted in any way. What happens is that as the battery charges up, the voltage will slowly increase, and the regulator will output the higher voltage and shorten the width of each pulse, in effect reducing the charging current to avoid heating and gassing.

That might sound okay, but there’s a technical problem that results in a solar panel not being able to give its full output. Here’s a simple example. Let’s take a 180W solar panel. Let’s assume it’s putting out 10A at 18V. Note that solar panels do not operate at 12V. Power is a product of voltage and current. However, after the regulator, the voltage is say 13V and multiplying that out 13V times 10A gives a power of 130W. That’s a loss of 50W, or only about 70% of the solar panel capacity can effectively be used. MPPT regulators operate a little differently. They have two separate circuits, so that the output from the solar panels goes through one circuit and then there’s a second circuit that does a voltage conversion at level suitable for battery charging. For example, if 13.5 V is required at the battery terminal, then that’s what the regulator outputs. It’s not dependent on the battery voltage at all. The mathematical equation looks something like this, still using the 180W panel. The input voltage looks the same, that is 18V times 10A gives 180W. On the output side, since say 13V is required, then the output current is 180W divided by 13V, which gives a current of 13.8A. Nothing is 100% efficient but MPPT regulators at best are around 90%, so the power output is about 160W. The efficiency can vary though, as the temperature of the solar panel rises, the voltage output drops (something like 4% for every 10°C).

MPPT regulators have another asset and it’s in the name — maximum power point tracking. Without getting too technical, what that means is the whatever the output of the solar panel, be it in full sunshine, partial shade or full cloud cover, the MPPT tracks the optimum voltage level to maintain the highest output.

That might sound like a MPPT regulator is the first choice, but PWM regulators do have a couple of advantages. They are cheaper to purchase and because of a simpler circuitry, they have a higher reliability factor. PWM regulators are good for smaller power systems and when system efficiency is not so critical.

Apart from anything else, that does make it necessary to have a fairly sophisticated control system to not only monitor battery loads, but also to control battery charging voltage and currents, particularly when there are multiple sources for battery charging simultaneously. That is from a mains charger/generator and solar panels or from a tow vehicle via a DC-to-DC charger. A basic battery charger, even a multi-stage one, won’t handle that.

“A regulator, otherwise known as a solar charge controller, is required to provide the most effective charge to the battery” Much like a battery charger but more sophisticated, a fully equipped battery management system will not only charge a battery, either AGM or lithium but also have an in-built solar regulator and accept an input via a DC-to-DC charger, from a tow vehicle. That all might sound quite simple, but a BMS is quite complex device. Some manufacturers include a built-in distribution board for ease of wiring and fault finding and more than one includes a Bluetooth facility so that the system condition can be monitored from a smart phone. Some systems can include an external shunt to accurately monitor load currents, while a quality BMS will have protection features like reverse polarity, current limit, overvoltage and fuse protection.

A single article could not cover this topic properly, so in the second part I’ll get the calculator out and crunch a few numbers on 12V loads, battery capacity and solar panel requirements.

Thanks to 12V Guru, BMPRO’s David Bayliss for his valued assistance in the preparation of this article.

How Much Can my Vehicle Tow?