With the recent completion of the motorway between Coffs Harbour and Ballina in northern NSW, the Pacific Highway is now a fast-paced ribbon of modern dual lane road. Kilometres zoom by through cane fields and forest with the punctuation of small towns along the mighty Clarence River, luring us to check out their slower-paced cafes and old-world stores.

While travel is now easier between Sydney and Queensland, for much of the journey, only 30 or so kilometres to the east is a world of serenity and beauty. Mind you, if developers and some local councillors had their way sixty years back, the road would run along the Pacific Ocean amid high rise and beachfront resorts.

Instead of the proposed strip development, we now have the hard-won Yuraygir National Park running for 65 kilometres between Red Rock and Yamba. This section is the longest stretch of preserved land on the Premier State’s coast. It is home to sleepy holiday villages, numerous caravan and national park campsites, and some of the most tightly held private beachside land. 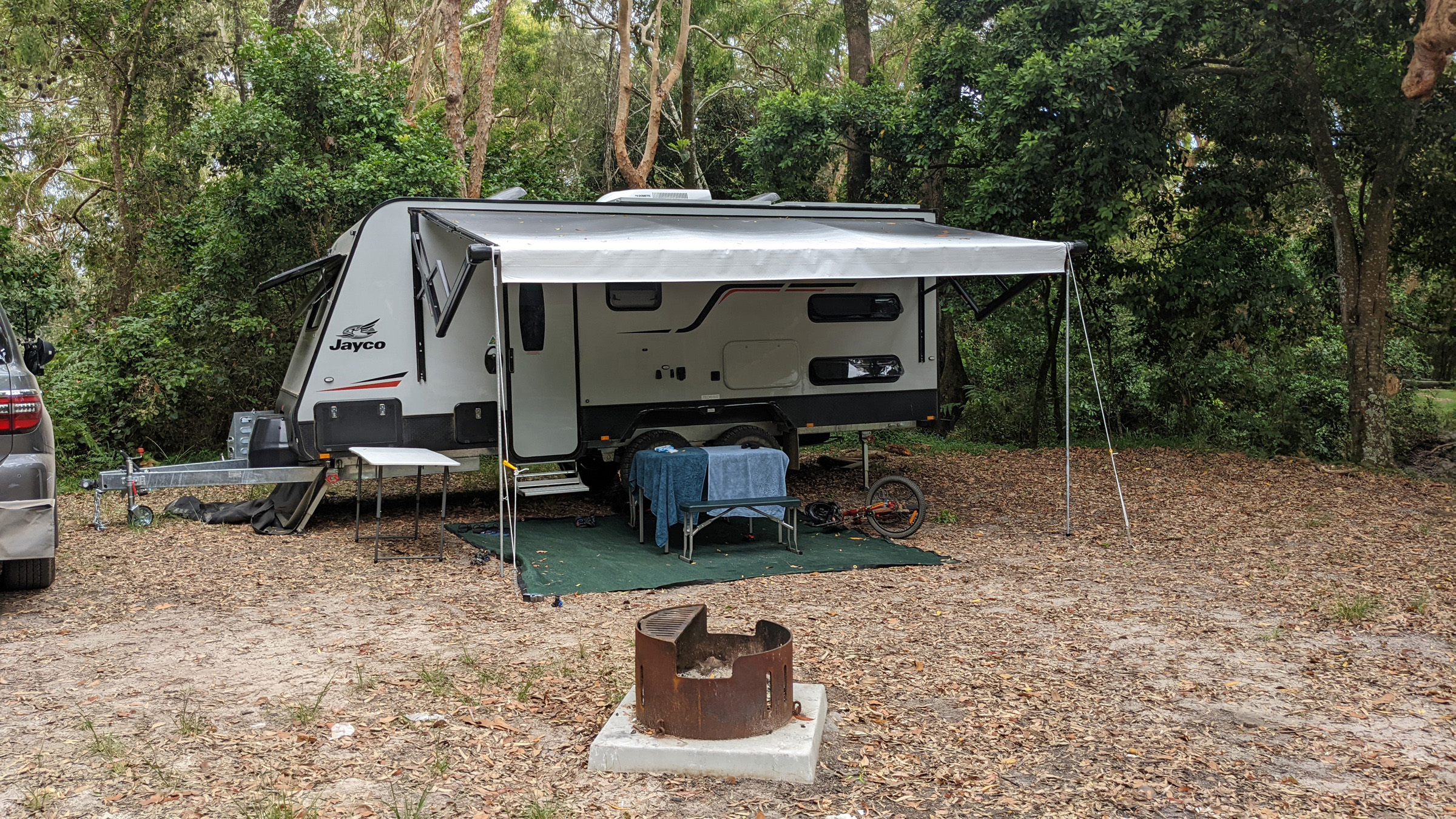 Yuraygir (pronounced with an emphasis on the middle syllable) took its name from a phonetic interpretation of the original inhabitants, the Yaegl. Along with the Gumbaynggirr in the park’s southern section, these original inhabitants lived in these lands for generations. As a result, middens and extraction sites can be seen throughout the park, and local land councils play an important role in park management.

Through the early part of the 20th century, the north coast of NSW remained isolated and undeveloped. Thick forests and coastal wetlands made transport difficult, and life was tough for those hardy souls venturing into the bush. But stoic fishing families set up camp at the mouth of the Wooli Wooli River and early as 1885 at Sandon, oyster leases at Wooli were supplying the Grafton area and beyond.

It wasn’t long before hinterland farmers set up camp over summer at beaches all along the stretch of serene coastline. Progress wasn’t always sympathetic, though, because in the early 1920s sand mining companies pushed tracks through the scrub and lagoons between Brooms Head and Yamba to extract rich deposits of zircon, rutile, gold, and other heavy metals. Soon there weren’t many beaches and sandhills that hadn’t been turned over by the miners. But things were changing by the 1960s, and a groundswell of conservative action called for the end of the mining with the result that in 1975 much of the coast was given over to become a national park. With more acquisitions, an expanded section of 314 square kilometres was declared in 1980 as Yuraygir National Park.

The transfer of land to the park, much of which was under perpetual lease, was protracted and difficult for families who had worked and played on their holdings for generations. When roads to Shelley Beach were closed, many locals were outraged. Some carry resentment toward the park service to this day. Clashes over 4WD access to Pebbly Beach still fester today, and the campground is one of only a few national park camps in NSW with a permanent caretaker.

Three Parks in One

Unless you want to take the four-day coastal walk, you need to access the park from four points through the forest and coastal heath. Most roads to the coast are around half an easy hour’s drive from the highway. You could probably see most of the highlights in a day, but there’s a good chance you will want to move in for good. The half dozen or so villages have very different settings and distinct vibes, both in geography and facilities, so there’s probably a destination for everyone — unless you prefer the high-rise life.

Pebbly Beach is one of the best beachside camping areas anywhere, and it has been popular with dozens of families that flock from far and wide to the 70 campsites a short stroll from the beach. Access is straightforward along the Barcoongere Forest Way. Some maps will suggest McPhillips Rd, south of Halfway Roadhouse, but it’s very rough. You then need to 4WD along Station Beach and across salty tidal waters of Station Creek. Sites are limited to smaller vans and campers and tents, of course, but the most challenging part of getting here is navigating the online booking site to find a vacancy on any chosen day.

Settled in amongst banksias and casuarinas, the grassy area is on the first sand dune over the beach and has a well-maintained amenities block. A well-trodden path leads north to Freshwater Beach and an ancient Indigenous midden.

There’s an alternative near the park entry for those without the desire or vehicle to seek out Pebbly Beach. Station Creek camping area lies within clusters of angophora and banksia beside the estuary. Sites are small and might be difficult for larger vans. However, camper trailers and single axle caravans would be fine.

If offroading isn’t your idea of fun, then the middle section of the park has two access points with blacktop most of the way. Wooli is calmly settled on a long spit that separates the Pacific and the Wooli Wooli River. Training walls protect the entrance and offer a perfect place to cast a line.

Two caravan parks, a small general store, a hotel, and a bowling club have the basics covered. Hire boats on the river are available, but we chose an offshore charter through the local tackle shop on a 40ft powerboat to North Solitary Island.

There are loads to explore, including the small community at Diggers Rest and the Boorkoom campground, with only 11 sites on a grassy headland. Further north, you pass the oddly named Lake Hiawatha and the matching Minnie Water, seemingly referencing the 19th century Longfellow poem. Perhaps it was real estate marketing that gave us these names, as there were plans in the 1960s to establish a new city on the banks of the lake. Minnie Water was called the wire fence — much more Australian — up until then.

Minnie Water retains a nostalgic ambience of a 1960s holiday destination. Drive down to the large sandy strip near Flat Rock for safe swimming and hours of rock hopping to search out tidal pools of sponges, urchins, and shellfish. Illaroo and Rocky Point Campgrounds have plenty of room for vans in the 72 sites right on the beach. There are easy walks through Angophora Grove and onto the headland. Keep an eye out if you are hiking west, though. There are military impact areas marked on some maps that show the sites of Mustard Gas tests during WWII.

As much as Minnie Water is a remarkable and almost forgotten gem, there’s an even more secret hideaway accessible by 4WD a few kilometres north along the beach at low tide. Sandon was settled on the southern shore of the Sandon River as long ago as the 1930s, and in the 1960s around 30 lots were converted to freehold. It’s a closely guarded community of holiday houses with a craggy headland with fantastic views over the estuary and entrance. The Sandon River Camping Area is across the inlet, but it’s a long trek back to the highway and north to the Brooms Head access road — or a quick swim across the channel.

On the way back to the highway for the next chapter of the park, stop at Lavadia Blueberries, where you can pick your own seasonal blueberries for $10 a bucket. We stocked up and froze some that we have since been enjoying for weeks.

Brooms Head is probably the best-serviced destination for caravans in Yuraygir, with 90 sites at the sprawling Red Cliff and the Lake Arragan National Park. In addition, the town caravan park has more than 180 more grassy spots, and some of these front a tidal lagoon so that you are only a few metres above the water at high tide. Pets are allowed in the northern section of the town park.

A general store carries the essentials (including alcohol) while a bowling club with a restaurant serves hearty and tasty meals.

A well-formed dirt road skirts the sandhill south to the Sandon River to what you might call a heritage-listed campsite. The northern bank of the mouth of Sandon River had been a council managed ground since the 1950s, and shacks erected by regular visitors and fishermen still remain. There’s even a fishing club. The site is something of a welcome anomaly in the national park system, but spots are limited, caravan access can be tricky, and bookings are very well guarded. Nevertheless, fishing in the estuary is excellent, so it’s well worth the drive from Brooms Head for a very different experience, even if you can’t secure a site.

To reach the northernmost section of the park, you need to follow signs off the highway into Yamba. If you have time, take the detour through the picturesque and historic Clarence River port of Maclean — a lookout in town has views of the valley and the impressive new multilane freeway bridge in the distance.

Yamba is a thriving town at the mouth of the Clarence with all the shops, eateries, caravan parks, and facilities you would need. The big river access and top-class fishing helped the town prosper, and it has grown into a major North Coast tourist and retirement hub.

While there isn’t vehicle access camping in this northern section of Yuraygir, there are walks, day-use areas, and sublime views of the coast. That aside, the area’s claim to special status hangs on its surfing heritage. It was a mecca for 1950’s surfing bums and hit international fame when world champion Joey Cabell endorsed the break at Angourie Peninsula. As a result, the area was declared a National Surfing Reserve in 1987.

A plaque at Angourie Headland talks to the spirit of surfing when it acknowledges the surfing way of life and link past, present and future generations with our oceans, waves, and beaches. Add in the coastal tracts of unique bushland, and it might just as easily apply to those you sought to preserve Yuraygir for everyone.

Traditional custodian groups comprise the Yaegl Elders, Ulgundahi Elders and Wdajri Myiral Elders based in the Lower Clarence Valley from Maclean to Yamba, the Garby Elders at Corindi Beach and the Gumbula Julipi group at Coffs Harbour.

In autumn, the sea is still warm enough to swim and the fish are still biting — or so I’m told.

In spring, wildflowers should still be in bloom and the weather is ideal for long walks on the beaches and headlands.

In summer, the cooling waters of the ocean and creek will be a relief from the summer sun, but many sites are well shaded by the coastal flora.

Winter brings about whales travelling along the coast, so bring your binoculars and a camera. This is the quietest time of year, so you should be able to settle into a secluded camp with a warm fire and a good book.