The Sands of Time

Drive 1000km west of Sydney to the Mungo National Park and you’ll travel back to the dawn of human civilisation in New South Wales. The central feature of the 1000sqkm national park is Lake Mungo, a large dry plain, sparsely vegetated and surrounded by low ridges and lunette dunes sculpted by the elements into an extraordinary moonscape. In these sandy pages are written one of the longest continual records of Aboriginal life in Australia, featuring Mungo Woman and Mungo Man, believed to be at least 42,000 years old. Internationally renowned for its archaeological treasures and remarkable natural beauty, Mungo delivers a unique and unforgettable outback experience.

The Mungo landscape evolved over millions of years, during a time when the climate was much wetter than it is now. Tectonic forces thrust up the Great Dividing Range which channelled surface water off its western slopes into the Murray Basin. The ancestral Lachlan River collected enough run-off to flow down Willandra Creek and fill a series of lakes for more than 20,000 years. Mungo was the last lake in the chain, and, with no outlet, it filled to a depth of 15m and covered 200sqkm. Unrelenting westerlies blew sand off the lake’s beaches to form crescent-shaped ridges (lunettes) along its eastern margins. 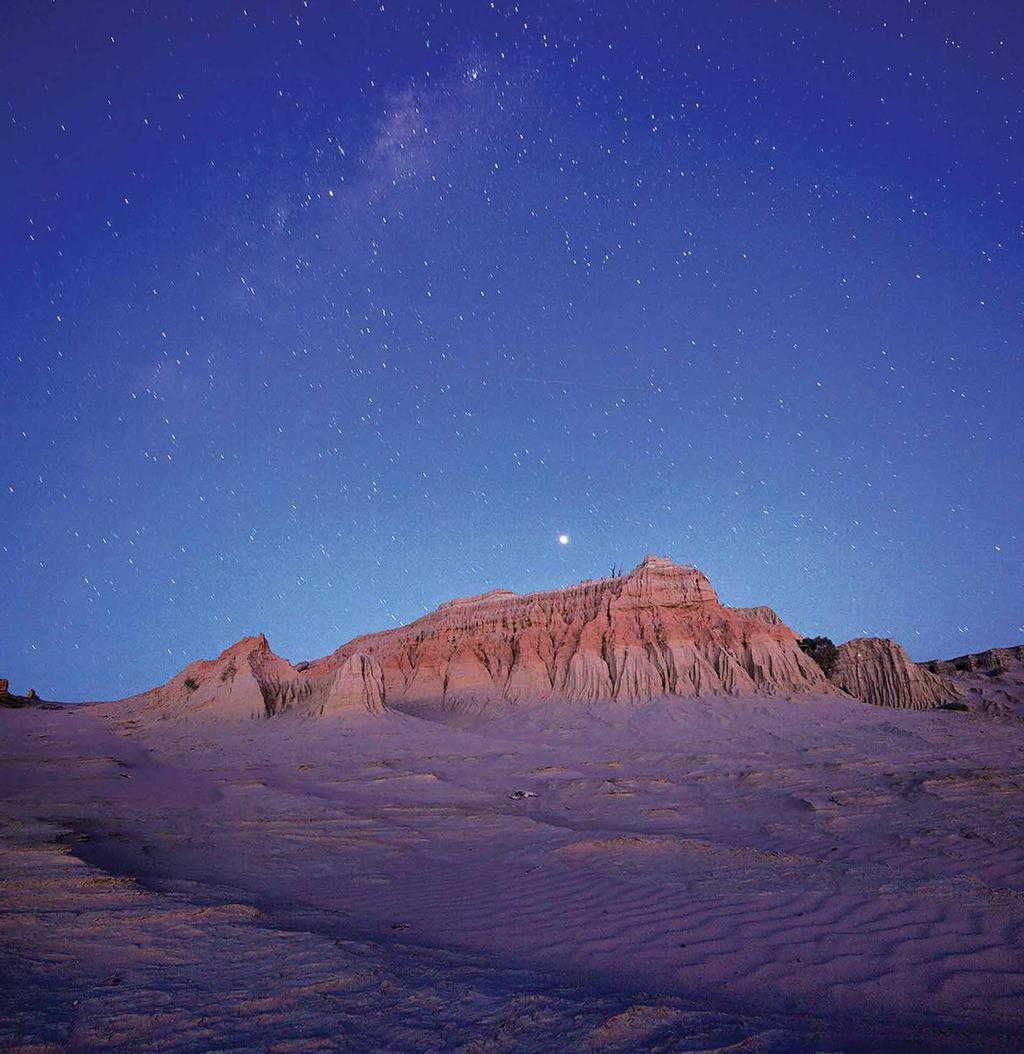 Fossils found in the lakes region are the remains of giant animals such as Zygomaturus, a wombat-like creature weighing almost 3 tonnes, Procoptodon, the largest kangaroo that ever existed, large robust wallabies called Protemnodons, and Genyornis, a stout flightless bird more than two metres tall. The last of the local megafauna became extinct about 10,000 years ago.

Around 60,000 years ago, modern humans left Africa and migrated eastward through Asia to Oceania. Falling sea levels enabled them to island-hop through the Indonesian archipelago into northern Australia. Roaming south across the continent, these migrants arrived at the Willandra Lakes about 45,000 years ago. These were the ancient ancestors of today’s Barkinji, Ngyiampaar and Muthi Muthi Aboriginal people who are now the joint custodians of this Country.

For about 25,000 years, a stable climate prevailed, with plentiful rain that kept the lakes full and the vegetation lush. The lakes teemed with fish and crustaceans, birdlife flocked to the shores, and the surrounding grasslands and forests abounded with wildlife. With such plentiful resources at hand, the Aboriginal ancestors settled into camps among the lunettes beside Lake Mungo.

Mungo Lake has great spiritual significance for the Traditional Owners

This is one of the oldest known human occupation sites in Australia, evidenced by middens of shell and bone, hearths and ovens, quarries, stone tools and axe heads. But the most significant and intriguing of all the relics are three sets of human remains discovered on the south-eastern shore of Lake Mungo. Dated to around 42,000 years old, they are the oldest human remains found on the Australian continent and some of the oldest Homo Sapiens in the world outside Africa.

In March 1969, geologist Jim Bowler and a team of anthropologists from the Australian National University unearthed remains of a human skeleton, including fragments of a skull and jaw bone. These latter were reconstructed and identified as the cranium of a young adult female, whom they dubbed ‘Mungo Woman’. The condition of the remains led the scientists to conclude that her body had been cremated and her remains liberally covered with ochre before burial — the oldest known instance of such a sophisticated ritual. At the request of elders from the three traditional tribal groups, the earthly remains of Mungo Woman were reunited with her spiritual Country in 1992.

In February 1974, Jim Bowler found another human skull at Lake Mungo, about 500m from where Mungo Woman had been discovered. Excavation by anthropologists revealed an almost complete skeleton, carefully laid on its back with knees bent and hands positioned in the lap with the fingers interlocked. The body had also been sprinkled with red ochre.

The skeleton proved to be that of an adult male — Mungo Man — about 196cm (6ft 5in) in height, unusually tall for a modern Aboriginal male, and around 50 years old when he died, which is relatively old for an early human. In 2017, his remains were repatriated to Lake Mungo and formally buried by tribal elders in a casket of red gum.

Lake Mungo is steeped in both beauty and history

The skeleton of a child, a contemporary of Mungo Man, was discovered in 1988, and rests, protected and undisturbed, among the dunes where it was first buried. Another adult skeleton was exposed by erosion in 2005 but within a year it had been completely destroyed by the elements. In 2003, a well-preserved set of human footprints were exposed and have been dated to between 19,000 and 23,000 years old. They are the oldest such tracks in Australia and the largest set of Ice Age human footprints in the world.

These ancient people lived in harmony with their Country for many generations. As the climate fluctuated, the water in the lakes rose and fell. The vegetation and wildlife waxed and waned in concert with the lakes, cycling between abundance and relative scarcity.

Then, around 22,000 years ago, the Earth’s climate entered a colder, drier phase — the last Ice Age. As global temperatures plummeted to almost 10 degrees lower than today, icefields spread across the northern continents, glaciers ground off Mount Kosciuszko and snowfields blanketed the Great Dividing Range. The Murray Basin turned cold and windy. Sand and dust-storms blew in from the west, scouring vegetation from Mungo’s lunettes and smothering the woodlands.

The Lachlan River retreated northward, abandoning Willandra Creek to set a new south-westerly course along its modern channel. The lakes gradually dried and as their levels fell the water became saltier and more inimical to the humans and wildlife. The lakes’ bounty of freshwater fish, yabbies and mussels, the animals that drank at the shorelines and the food garnered from the surrounding grass and shrublands gradually diminished.

When the lakes eventually dried, completely and irrevocably, the people departed their Edenic settlement and become nomads on the arid, windswept Willandra plains. Occasionally, seasonal rains created ephemeral ponds and billabongs where the people lingered for as long as the bounty lasted, and moved on. But through the ages they, and their modern descendants, always maintained a deep spiritual connection with their ancient homeland.

When the last Ice Age ended about 10,000 years ago, a warmer, semi-arid climate settled over the Willandra Lakes and has continued to the present day, with summer temperatures averaging in the high 30s and rainfall a meagre 250mm per year.

The best-known and most celebrated feature of the national park are the ‘Walls of China’, a series of crescent-shaped sand dunes rising up to 40m and stretching more than 30km around the eastern side of the Mungo lake bed. Eons of wind and rain have carved rills and gullies into the flanks of these spectacular formations to expose multicoloured strata of sand and clay — excellent subjects for photos in the setting sun.

Behind the Walls, bare dunefields march steadily eastward, rippled by deep swales that shelter mallee and spinifex. Beyond lie gently undulating plains of brown loamy sand that support woodlands of casuarina, mallee and mulga, native herbs and grasses. These varied landforms and plant communities are inhabited by a surprisingly rich and fascinating array of native animals — 150 species of birds, 22 mammals and 62 reptiles, among which 18 are classified as endangered.

Emus, bustards and wedge-tailed eagles are the most conspicuous birds, while their mammal counterparts are drought-hardy red and grey kangaroos. Smaller marsupial species include the mouse-sized dunnart and ningaui that are energetic nocturnal predators. Surprisingly, the most diverse group of mammals in the Willandra region comprise tree-dwelling bats, whose nine species include the endangered Little Pied Bat.

Mungo National Park is part of the UNESCO World Heritage-listed Willandra Lakes Region, an area of 2400sqkm that takes in all 19 lakes of the system. Its inscription in 1981 was based on many outstanding natural and cultural values of universal significance, including its representation of major stages in the earth’s geological and climatic history over the last 100,000 years, as evidence of one of the oldest known Homo Sapiens cultures outside Africa, and as one of the longest continual records of Aboriginal life in Australia.

The Willandra Lakes were listed on the New South Wales Heritage Register in 1999 for their importance in demonstrating the course of cultural and natural history in the state, and were gazetted on the Australian National Heritage List in 2007. The creek that once flowed into Mungo is also preserved as a sacred site.

The World Heritage Area is supervised by a World Heritage Management Committee, made up of representatives of the NSW National Parks and Wildlife Service, landholders, Aboriginal traditional tribal groups, scientists and other stakeholders. Mungo National Park is managed jointly by the NPWS and traditional tribal groups under a Joint Management Agreement.

Visitors are excluded from culturally sensitive areas and, to preserve the fragile environment, access to the Walls of China is only by guided tour led by Aboriginal NPWS rangers. It’s a unique cultural experience in a spectacular landscape.