We Australians tend to take for granted our national mascot, the kangaroo, and its diminutive cousin, the wallaby. But there is one special place where these adorable creatures simply can’t be ignored, where you are guaranteed to see them en masse and up close, even lounging in or near your camp site. That place is the Murramurang National Park, on the New South Wales south coast, where in the early morning and late evening the animals come down to graze on the grassy verges of the beaches — a quintessential Australian sight.

Located 280km south of Sydney, Murramarang NP spans 25km of coastline from just south of Bawley Point to North Head overlooking Batemans Bay. No more than about 8km at its widest point from the Princes Highway in the west to the sparkling waters of the Tasman Sea, the park is easily accessed by several spur roads from the highway, all generally suitable for 2WD vehicles towing caravans or camper trailers. 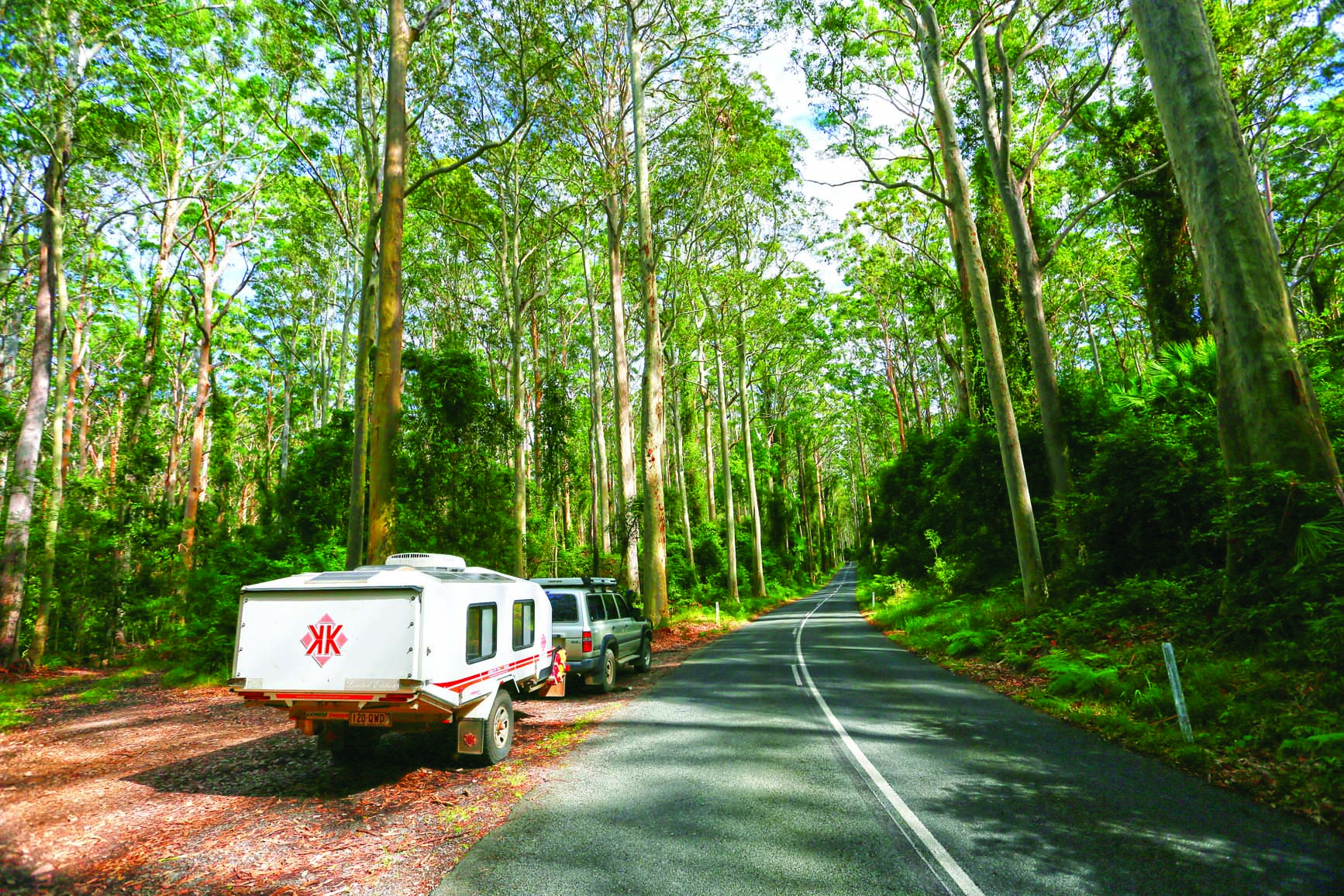 Murramarang NP is relatively small by south coast standards — only 12,386 hectares — but is chock full of natural splendour: it is geologically fascinating with ancient fossil-bearing rocks; its low mountains are cloaked in forests of majestic spotted gums that sprawl down to the shoreline; the coastal fringe is indented by secluded coves, sandy beaches and dramatic headlands; the adjacent ocean is dotted with islands inhabited by colonies of sea birds and surrounded by emerald waters that teem with marine life. Little wonder it is one of the most visited parks in NSW, and yet this superb coastal landscape remains largely undisturbed and unsullied by rampant tourist development.

The extensive forests provide habitats for 39 species of mammals (most commonly eastern grey kangaroos, swamp wallabies, red-necked wallabies) and more than 200 kinds of birds, including several species listed as threatened.

The Batemans Marine Park is the perfect partner to Murramarang National Park. Declared in 2007, the marine park embraces 850 sqkm of marine environment along the coast, from Bawley Point south to Wallaga Lake near Bermagui, and from the mean high water mark onshore to three nautical miles offshore. It is zoned for multiple use, not only to sustain marine biodiversity, but also to maintain a wide range of recreational and commercial activities.

An array of marine habitats are found here — sponge gardens, lush forests of kelp, rocky reefs, islands, seagrass meadows, even shipwrecks — that support various communities of marine animals, birdlife and more than 100 species of fish. In spring, whales pass through these waters on their annual migration and, in summer, warm currents transport tropical fish down Australia's east coast to the park.

Durras Lake is one of the region’s most significant intermittent estuaries, providing a vital habitat for several threatened seabirds and migratory bird species, and extensive seagrass beds that sustain important fish nurseries.

When James Cook sailed up the coast in April 1770, he made the first sighting of south coast Aboriginal people — some in bark canoes, others on land — at what is now called Murramarang Point, just south of Bawley Point. It is likely that they were Dhurga-speaking people of the Yuin nation, whose ancestors had lived in the region for more than 20,000 years. A campsite and midden complex on the Point is now protected as the 60ha Murramarang Aboriginal Area, one of the most significant Aboriginal heritage sites in the state.

More than 30 other archaeological sites have been recorded within the park, including a midden in a sea cave near North Durras that dates from about 500 years ago and was occupied into the time of European settlement.

The first Europeans to pass through the area were three survivors from the wreck of the Sydney Cove in April 1797, who passed through Durras on their way to the settlement at Port Jackson.

Hearing the reports of the survivors, George Bass sailed south eight months later to make a detailed exploration of the south coast, during which his party entered Durras Inlet and Batemans Bay. In 1828, the Durras area was surveyed and the first property, ‘Murramarang’, was established, begining a long pastoral tradition in the area.

With its abundant forests, the region was prime country for a timber industry and, after the pioneer cedar-getters moved on, the first settlers began harvesting the more plentiful supplies of hardwood. Mills sprang up along the coast at Pebbly Beach, Wasp Head (near Durras) and Bawley Point. The mill at Kioloa was one of the most prolific, producing about 50,000 cubic metres of timber a year at its peak.

Tourism arrived in the 1930s when Charles Innes built 13 holiday cabins beside Lake Durras and villages evolved at South Durras, North Durras and Depot Beach, which continue as freehold enclaves surrounded by the national park.

Most of the marine park is open to recreational anglers and offers some of the most varied and abundant fishing in the state, in a tinnie or kayak or from the many beaches and rock platforms. Durras Lake is well known for bream, whiting, flathead and, in season, prawns. There are two boat-launching ramps in the area: one at Durras Lake and one at Beagle Bay in South Durras. Wherever you go, you’ll need a licence and bag and size limits apply.

The marine park is also a popular diving and snorkelling destination. The rocky coastline has plenty of sheltered locations for snorkelling, as well as reefs, deep gutters and drop offs for divers.

The national park is a bushwalker’s paradise, with numerous tracks suitable for all ages and levels of fitness, ranging from easy short walks to medium-length trails, up to a couple of challenging treks that explore long stretches of the coastline and Durras Mountain. All the walks are described in brochures issued by the National Parks and Wildlife Service, available online.

With all that there is to see and do in Murramarang, even a modest agenda will keep you busy for days, and visitors are spoilt for choice of accommodation, with cabins, holiday houses, caravan parks and campgrounds at several locations all along the length of the park.

Murramarang has a timeless feel about it, both in the way it greets the eye and in the way people take their leisure here. A visit here is not so much an escape from somewhere you don’t want to be, but a return to a place you’d prefer to be —unspoiled, serene and relaxed.